Water Found in Hawaiian Volcano Could Lead to Eruptions 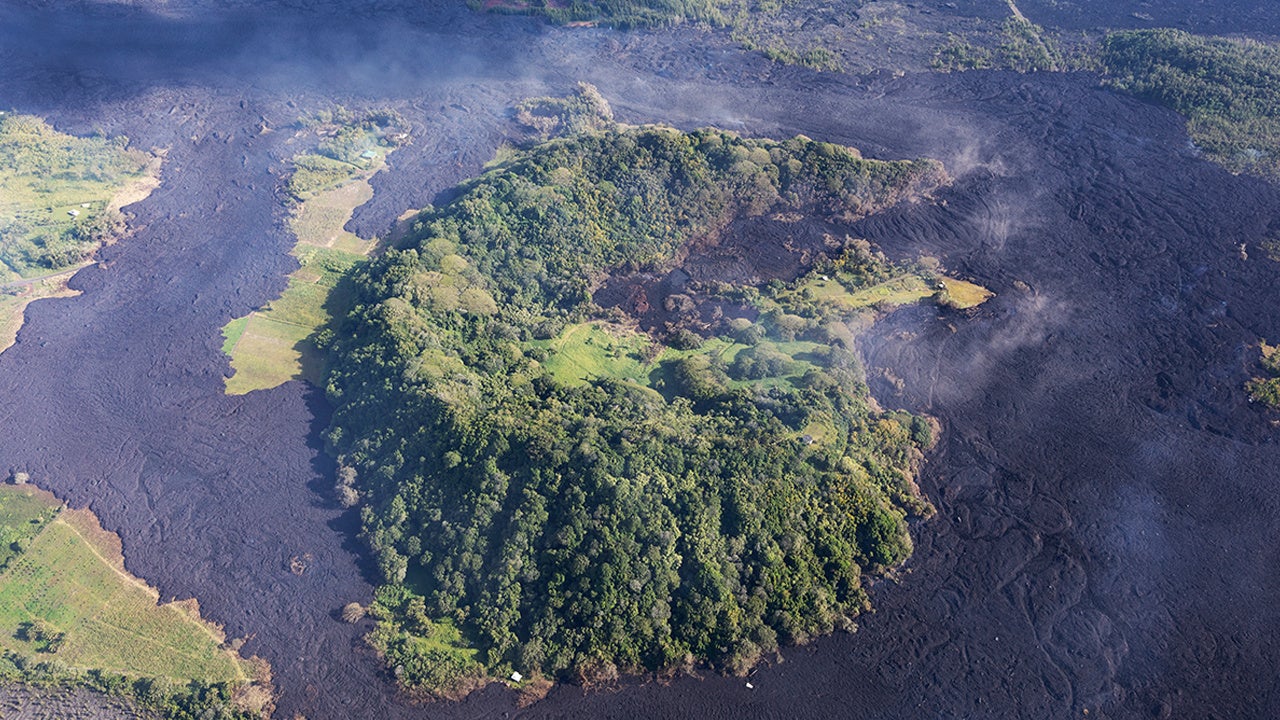 Aerial view of lava flows from the eruption of volcano Kilauea on Hawaii, May 2018. Frizi / iStock / Getty Images

Hawaii’s Kilauea volcano could be gearing up for an eruption after a pond of water was discovered inside its summit crater for the first time in recorded history, according to the AP.

Last year, the volcano spewed lava and destroyed homes on the archipelago’s Big Island. Then in the spring, a lava lake vanished from sight within the Halema’uma’u summit crater. Now, the lave is being replaced by a growing body of water that is likely rising from below, as the New York Times reported.

The U.S. Geological Survey reported that the pond was growing in a blog post. “We can now confirm the presence of water at the bottom of Halema’uma’u. [USGS Hawaiian Volcano Observatory] observers on the helicopter overflight saw reflections from the green pond — the ‘smoking gun’ for water,” the blog post said. “The pond has clearly enlarged since the earliest photos on July 25.”

“The question is what does this mean in the evolution of the volcano?” USGS scientist emeritus Don Swanson said to the AP. He added that Halemaumau has never had water since written observations began in 1823, so the pond is unusual. However, oral tradition suggests there was water there around 1500 and then again around 1650, according to the New York Times.

While scientists do not know what will happen next, they do know that when when lava interacts with water it can cause explosive eruptions.

“I am a bit surprised that water could accumulate to make a lake at Kilauea because the rocks are so permeable,” Michael Manga, professor of Earth and planetary science at the University of California, Berkeley, wrote in an email to CNN. “I would have guessed that the lake water would drain.”

Since the lave lake drained, the rocks are cool enough to allow water to exist as a liquid, but they are scorching hot. The water, acidified by escaping magmatic gas, is about 158 degrees Fahrenheit. It is flanked by several fumaroles, vents unleashing volcanic gas at temperatures as high as 392 degrees Fahrenheit, according to the New York Times.

Scientists are perplexed by the presence of water and can envision several different ways the water may affect Kilauea.

“Until we have a better understanding of where the water is coming from, it’s difficult to forecast what could happen next,” said Janet Babb, a geologist with the U.S. Geological Survey’s Hawaiian Volcano Observatory, in an email to CNN.

She said it was likely that lava would return. In one scenario, if the lava rises through the water, the two could react violently and create explosions, especially if the water column is deep, which is not yet known.

“Water plus heat (from magma/lava) makes steam, and steam can expand tremendously, which can break up lava into small bits and hurl them into the air,” Babb wrote to CNN. “However, there is no evidence that an explosion, under the current conditions, would increase risk to public safety (i.e., any explosion would be small).”

Swanson agreed with her assessment and noted that any imminent blasts will be confined to the crater itself. “There is a greater potential for explosions than we’d realized before,” he said to the New York Times, “but this is not going to affect public safety.”

And yet, Kilauea is a highly active volcano that alternates between explosive and effusive (slower, steady lava flows) periods. The presence of water means the next explosive period could result in a massive collapse of the crater floor, as CNN reported.

“Kīlauea remains an active volcano, and it will erupt again,” the Geological Survey wrote in a report July 31. “Although we expect clear signs prior to the next eruption, the time frame of warning may be short.”