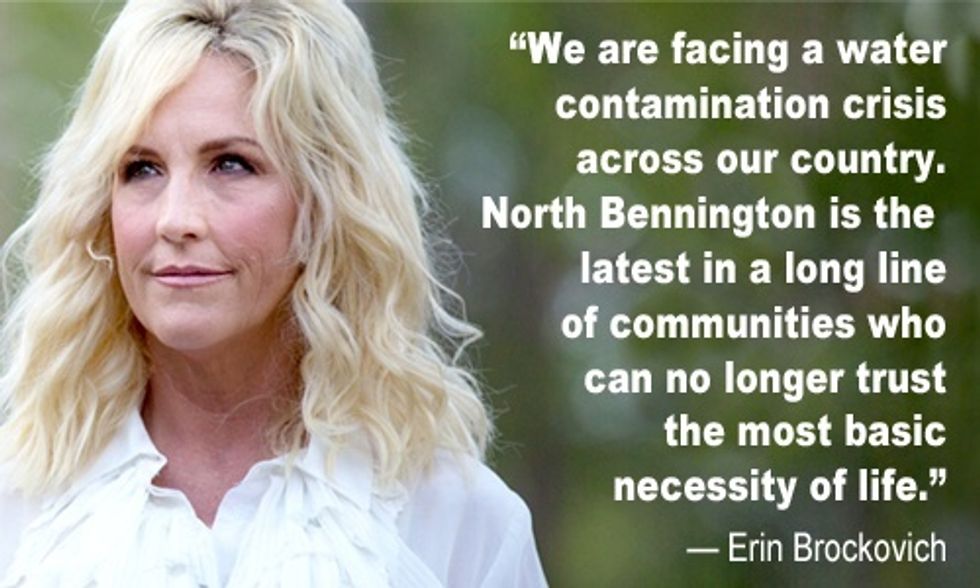 Consumer advocate Erin Brockovich and the law firm Weitz & Luxenberg announced today they are expanding their investigation into perfluorooctanoic acid (PFOA) water contamination to include North Bennington, Vermont. The announcement comes after new tests by the State of Vermont revealed several wells in the town contain the same chemical that was found in the Hoosick Falls, New York and Petersburgh, New York water systems.

“We are facing a water contamination crisis across our country," Brockovich said. “North Bennington is the latest in a long line of communities who can no longer trust the most basic necessity of life. I hope this investigation will help residents understand more about the size and scale of the problem."

The Vermont Department of Environmental Conservation announced it found elevated levels of PFOA in North Bennington within a mile-and-a-half of the former Chemfab factory after testing several wells in the area. Chronic PFOA exposure has been linked to testicular cancer, kidney cancer, thyroid disease, high cholesterol, ulcerative colitis and pregnancy-induced hypertension. Studies suggest other health consequences include a possible connection to pancreatic cancer.

“Drinking PFOA contaminated water can have a devastating impact on human health," said Robin Greenwald, head of the environmental and consumer protection unit at Weitz & Luxenberg. “We are undertaking this independent investigation to understand why this has occurred and the ways in which residents have been harmed. We will be talking to residents about their legal options and to the authorities about how the ongoing contamination can be stopped."

Brockovich and Weitz & Luxenberg recently filed a federal class-action lawsuit against Saint-Gobain Performance Plastics Corp. and Honeywell International Inc. on behalf of Hoosick Falls, New York residents who have been drinking water contaminated by PFOA. The case was filed after local residents reported falling ill after drinking and cooking with this water.