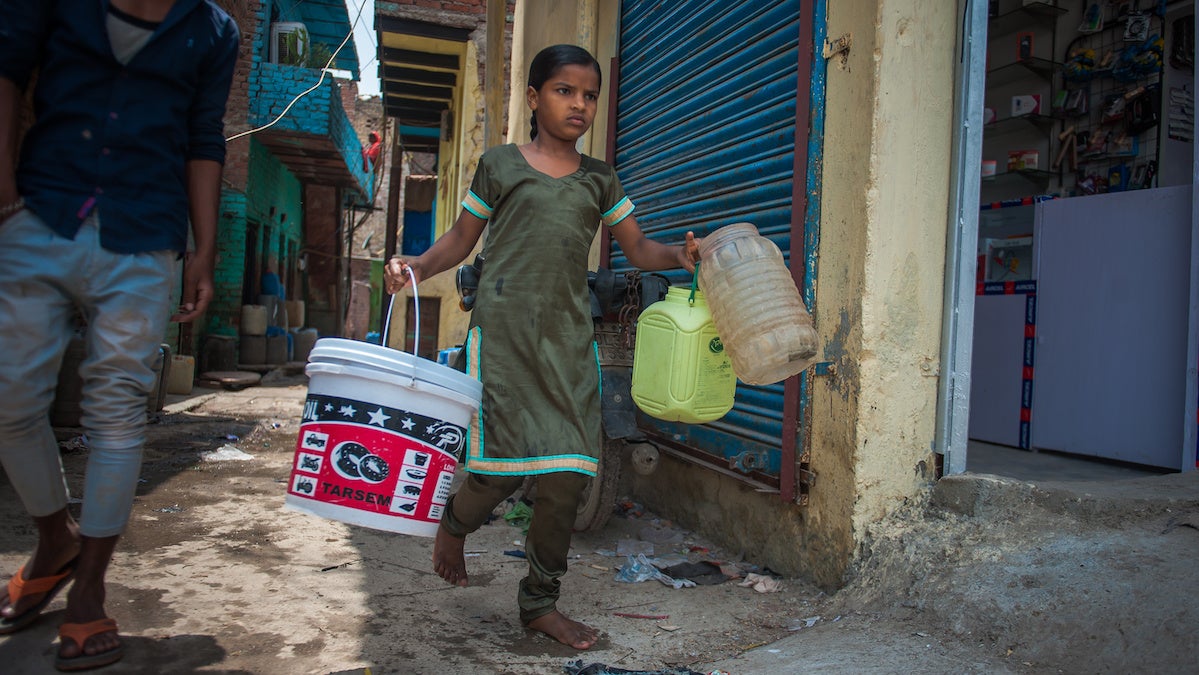 A girl makes a water run with empty buckets on May 17, 2017 in New Delhi, India. Shams Qari / Barcroft Media via Getty Images

Ever more of the world’s population is living with water insecurity and is unable to consistently access safe, clean drinking water.

A number of factors, including climate change and poor water management, are worsening water scarcity, which coupled with other social problems like rising inequality and ethnic tensions, are threatening conflict between states and within states.

Charles Iceland, director of global and national water initiatives at the World Resources Institute, spoke to DW about disputes over the essential resource and how it can be avoided, as well as the new Water, Peace and Security (WPS) tool that forecasts where water disputes are likely over the next 12 months, and how they might be avoided.

DW: What is a water conflict and what does it look like?

Charles Iceland: In many places throughout the world, there’s just more and more demand for water with respect to what’s available. Sometimes the conflicts are nonviolent — like in Australia or California where people go through the legal system or they work their issues out without violence. But in a lot of places, the problem is grave enough and the ability to resolve the problem is not well developed. So you can see the wrestling over these scarce resources develop in violent ways.

Where would you say are the regions and countries in which water, water scarcity, water quality are playing a role in conflict?

Populations are growing very quickly in sub-Saharan Africa — going up fourfold between 1960 and today. Resources have either stayed the same or you have a reduction in resources, because of climate change or because desertification is reducing arable land. So you have a lot of violent conflicts between these smallholder farmers and pastoralists wrestling over scarce land and water resources. We’ve seen over the past couple of years pastoralists massacring farming communities and retribution by farming communities.

We’re also seeing a lot of violent conflict play out in the Middle East. So, for example, in Iraq, a lot of the demonstrations that led to the prime minister’s resignation a few months ago. But part of the grievances entailed lack of services, which included lack of access to clean water and lack of access to electricity. They’re getting sick. About a year and a half ago, 120,000 people in Basra had to be hospitalized because they were drinking contaminated water.

And it’s [water scarcity] is also a problem in places like Iran, Afghanistan and India. So those are some of the hotspots.

So it could be an interstate conflict, but it could be intrastate as well between various stakeholders in society?

Will we see a future of water wars and water as the new oil?

Both, like a lot of metaphors, are not really accurate. Wars are rarely fought over water as a single issue. Rather, we see the problem as a threat multiplier. So it’s one issue in the background. If you have other issues leading to instability, maybe problems between ethnic groups or anything could trigger violence, the background of having water scarcity, has destabilized the society and made it less able to resolve problems amicably.

How much of a role does climate change play in water scarcity or water quality?

We have trouble attributing any particular drought or flood to climate change, but we are seeing very dramatic increases in the incidence and severity of drought in parts of sub-Saharan Africa and the Middle East. So we’re having a general decline in rainfall in some of these areas. In some of these areas the amount of rainfall stays the same but you have very large intermittent drought and flood periods. That’s what’s been predicted by climate change experts.

What other factors can lead to water scarcity?

The management of water resources is a critical factor. So people, in theory might have enough water in some places, but they’re mismanaging it. They’re losing water. They are polluting the water. And then there are upstream, downstream issues. There are many instances where the upstream users are accessing water, but downstream users suffer because they’re getting less water.

What exactly is the Water Peace and Security tool?

We’re a consortium of nine organizations in the U.S. and Europe that are working together to both try to identify hotspots of water insecurity and then try to help local people and the global community do something about this to either avoid conflict or minimize the impacts of conflict. So we’ve developed a machine learning-based model that tries to predict where conflict might break out in the next 12 months. We’re using a number of factors — political, economic, social, demographic — that might point at imminent conflict. And to that group of indicators, we add water and food insecurity indicators. We try to identify these hotspots, whether they are water-related conflicts and what are the drivers of the conflict.

How can you resolve a water conflict?

There are lots of examples on the subnational and international levels where either global or national entities have brought competing [water] users together.

A very good example of this was in 1960 — the World Bank brought the governments of India and Pakistan together to develop a treaty that divided up the water in the Indus River Basin. That treaty has come under pressure recently but it’s still been able to keep India and Pakistan from having problems boil over — at least to date.

Jennifer Collins conducted the interview, which has been shortened and edited for clarity.