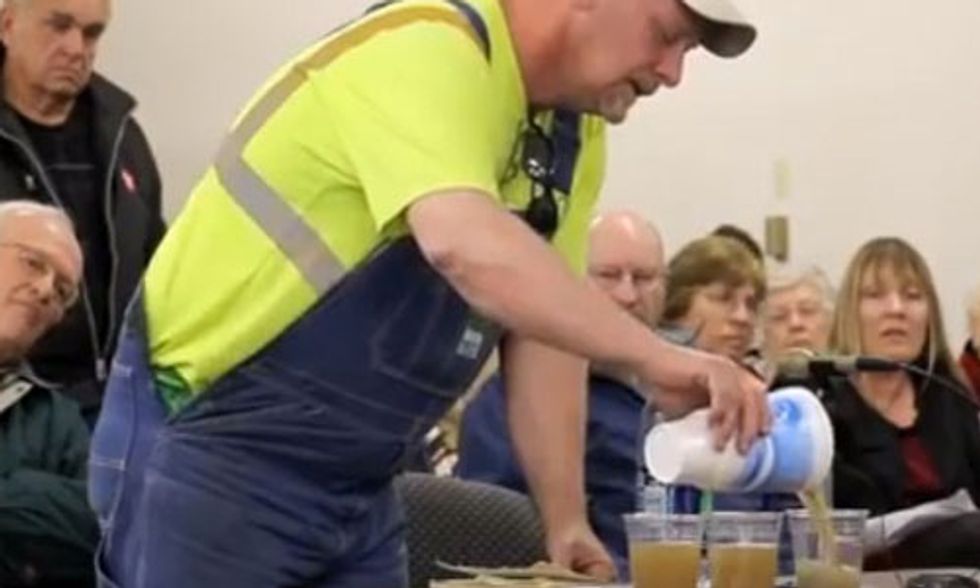 The Nebraska Oil and Gas Conservation Commission had a public hearing last week in Sidney, Nebraska about a fracking wastewater storage well proposed by Terex Energy Corp., which wants to store its fracking wastewater from other states in Nebraska. According to Bold Nebraska, the project would move "80 truckloads carrying 10,000 barrels per day of pollution destined to be dumped into a disposal well in Sioux County." The advocacy group uploaded videos of the public hearing to their site.

The issue is unsurprisingly very contentious for Nebraskans and obviously a deeply personal issue for the first speaker at the hearing, James Osborn. He says he has experience in the oil and gas field, having built pipelines all over the country, and his brother and two nephews have worked in the fracking industry.

But Osborn is very concerned about Nebraska's precious water supply: "Everything in Nebraska runs on water. Period." To make his point, he pulls out three plastic cups and fills them with water. Then he tops them off with a healthy dose of a mysterious brown sludge—allegedly fracking fluid—and says, "You told me this morning when I was in here ... that you would drink this water, so would you drink it?"

See how the Commission responds: