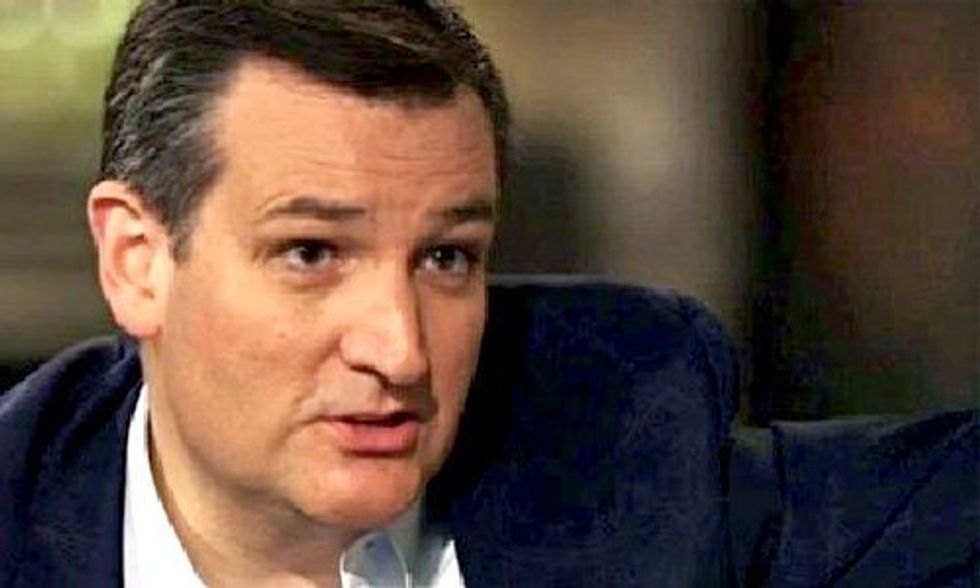 Republican presidential candidate Ted Cruz told Glenn Beck in a new interview that climate change is a religion, not a scientific position. According to the Texas senator, "global warming alarmists" (or the people who believe in climate change) don't have evidence to prove that the planet is warming.

What? It's a comment so baffling that you have to watch the exchange for yourself (via Right Wing Watch):

The card-carrying climate-denier was referring to his recent grilling of Sierra Club President Aaron Mair during a Senate hearing, in which Cruz pushed Mair for nearly 10 minutes on climate change.

Mair was at the hearing to explain how communities of color are disproportionately affected by pollution and climate disruption. However, Cruz used this time to push Mair on climate change with classic denier arguments, saying satellite data shows the Earth isn’t warming and that there has been a “pause” or “hiatus” in global warming, which NOAA, the National Oceanic and Atmospheric Administration, has refuted. Mair has also posted a response to Cruz’s attack, refuting these claims.

You know part of the reason he didn't know the facts? Because climate change is not science, it's religion.

Look at the language where they call you a "denier" Denier is not the language of science. Look, I'm the child of two scientists. My parents are both mathematicians, computer programmers. My dad was self-taught geophysicist. The essence of the scientific method is to start with a hypothesis, and then look to the evidence to disprove the hypothesis. You're not trying to prove it, you're trying to disprove it. Any good scientist is a skeptic, if he's not, he or she should not be a scientist.

The response from the Sierra Club, "We have decreed this is the answer, you must accept it." And so he didn't know his facts because he just knew his religion.

Earlier in the interview, Cruz said he does not understand why his fellow GOP candidates did not readily admit to being climate change skeptics when they were asked this question by CNN's Jake Tapper during the last Republican debate.

“For whatever reason, they were afraid to say yes and they sort of bobbed and weaved on that question. I tried to jump in I said ‘Jake [Tapper], you want a skeptic? I’m right here,'” Cruz said.

It's not the first time that a right-wing politician has compared climate change to religion, which has "become a go-to GOP talking point during the run-up to next year’s elections," according to a post from the University of Southern California's Religion Dispatches.

"The basic premise of these comparisons is that extreme environmentalists exhibit some hallmark features of religion: rituals and taboos (such as recycling or avoiding meat); apocalyptic beliefs (global ruin due to climate change); and ideals rooted in an Edenic past (Earth before humans)," the article says.

"The recent GOP strategy is to point out superficially religious elements of environmentalism and, by way of loose association, assign ideological bias to the incontrovertible scientific evidence of climate change."