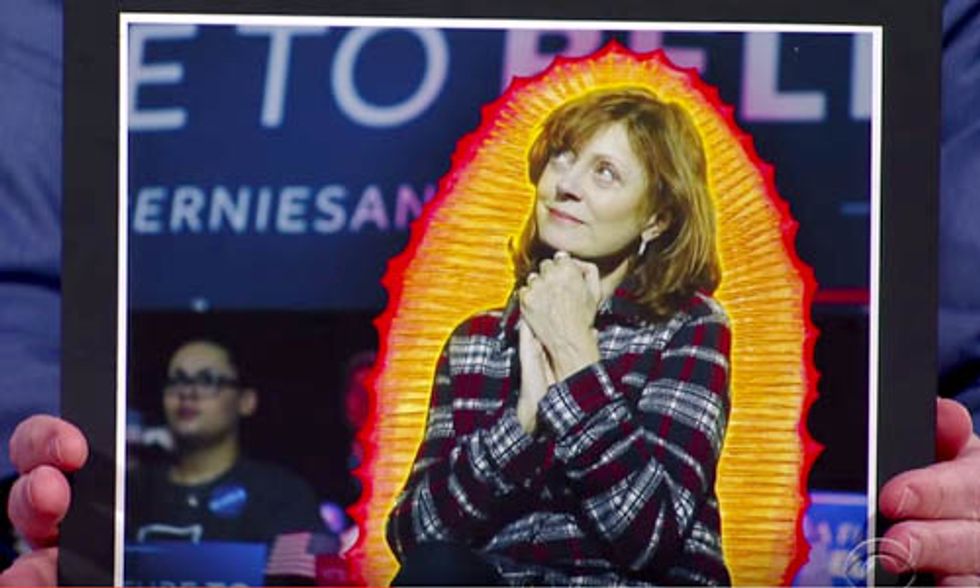 New voters may know Susan Sarandon as a surrogate of the Bernie Sanders campaign, but the actress actually used to be a strong Hillary Clinton supporter.

“I had to break up with her,” Sarandon joked. “I told her, don’t go in Iraq. I’m very upset about that.”

“So this was before 2003?” asked Late Show host Stephen Colbert.

“Absolutely," Sarandon confirmed. "And she went in. So I was like, who is this person, I can’t trust her. And then she became Secretary of State. I’m an environmentalist. Fracking is absolutely the worst thing you can do for the environment. ... She goes 'behind my back' and she’s selling it all over the world. ... She’s selling Monsanto. ... How can I trust her? And I’m a feminist. [Women] need a $15 minimum wage, right?”

“She’s changed her mind on that, right?” Colbert asked.

“No, she’s still saying that," Sarandon said. "We went ahead and did it in New York and she goes up next to [New York Gov. Andrew] Cuomo and signs it. How can I go back with her? I don’t trust her.”

Colbert was curious. “What is it you see in Bernie? What makes you look so moon-eyed at him?”

“He’s been consistently morally in the right place my entire life,” Sarandon said. “He’s always there before it becomes simple.”

But Sanders supporters are becoming increasingly worried, especially after a rough Tuesday in the Acela primary.

“He’s now 350 delegates behind,” Colbert said. "Even to win he’s got to get the superdelegates to come over to his side, which is an undemocratic thing according to him, so he would have to use the thing that he’s criticizing [Hillary] in order to beat her. That would be like the good guys using the ring in The Lord of the Rings!” Colbert exclaimed.

Still, she’s not ready to decide whether she''ll vote for Clinton in the general election if Sanders isn’t the Democratic nominee.

“I said, some people say that Trump might [bring the revolution faster]. I’m more afraid of actually Hillary Clinton’s war record and her hawkishness than I am of building a wall, but that doesn’t mean that I would vote for Trump," Sarandon said. "And I’m not sure Trump’s gonna get it. I think all kinds of crazy things could happen at those conventions."