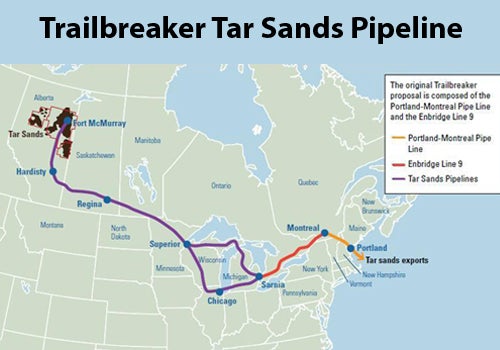 We’ve written before about Big Oil’s new playbook on tar sands: using stealth tactics to make it harder for the public to figure out what dangerous projects they have in mind and trying to pull one over on the public. Bearing locally-based labels like “Portland Pipe Line Corporation” and “Montreal Pipe Line Limited,” the proposed Trailbreaker tar sands pipeline is actually owned by ExxonMobil, via its Canadian Subsidiary Imperial Oil, with tar sands giant Suncor Energy having a minority stake in the company. 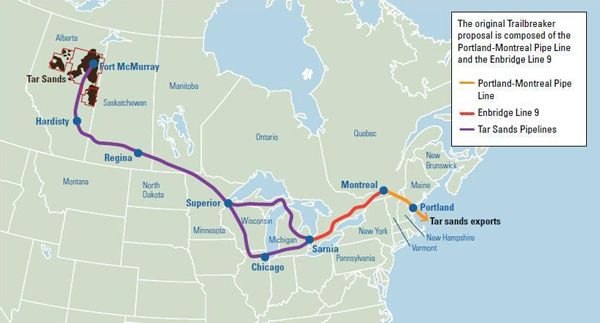 Imperial and Suncor are among the largest developers of Canadian tar sands oil. This convoluted corporate maze of oil behemoths is in bed with Enbridge, the company behind the Kalamazoo River oil spill, the most costly onshore spill in U.S. history. Now, it apparently wants to pump tar sands oil from Alberta through Vermont, New Hampshire and Maine to the port of Portland for overseas markets. Tar sands oil is a heavy, corrosive, diluted bitumen and is known as one of the dirtiest, most-polluting, hardest-to-clean-up fuels on the planet. The tar sands business is booming in Canada and the corporate hawks are positioning to pounce on the profits they see in this dirty product by using New England communities as conduits to export markets.

And the plot thickens. Exxon’s apparent partner in the Trailbreaker tar sands plot is Enbridge, the company that owns the line from Ontario to Montreal that could connect to the line to Portland. In 2010, an Enbridge pipeline rupture poured a million gallons of oil into Michigan’s Talmadge Creek and Kalamazoo River, an incident which an independent review found was due to extreme negligence.

The New England Trailbreaker project would reverse the flow of the current Portland-Montreal Pipe Line (PMPL) going from Portland, Maine to Quebec. Under the Trailbreaker scheme, tar sands would flow across Canada and through Vermont, New Hampshire and Maine through this pipeline. And this oil flowing to Portland would not help the people of those states even if they wanted it because the most likely would be exported or sent to refineries by ship. The people of New England would be left with all the harm—ruptures and pumping station breakdowns that could threaten thousands of clear lakes and rivers and unspoiled forests.

The people of Vermont, New Hampshire and Maine have a long history of valuing their forests, rivers and lakes. They deserve straight talk and full disclosure, not backroom deals shrouded in a complicated a corporate structure that hides the true identity and motives of the real players who see these states as just a “pass-through” to the coast and a pass-through to easy profits.

“This pipeline presents a double whammy. ExxonMobil’s apparent partner in this tar sands pipeline scheme is Enbridge, which has disastrous safety record and is responsible for the devastating Kalamazoo River tar sands spill in 2010,” said Jim Murphy, Vermont-based senior counsel with National Wildlife Federation. “Enbridge spilled a million gallons of tar sands oil into the Kalamazoo River, the most expensive domestic pipeline spill in history that will mar the river for years, maybe decades. Independent review found that extreme negligence led to the spill. Vermont doesn’t need this type of disaster.”

These oil giants have a dirty track record. Let’s not let them add to that record.

A new analysis released today by Natural Resources Defense Council (NRDC), National Wildlife Federation (NWF) and other environmental groups shows that ExxonMobil is the majority owner of the pipeline that cuts across New England—a pipeline that is the subject of an emerging proposal to transport tar sands. ExxonMobil’s Canadian subsidiary, Imperial Oil Limited, owns 76 percent of the pipeline, while Canadian oil giant Suncor Energy owns the remaining 24 percent. These companies are among the biggest developers of Canadian tar sands.

The report is being released in connection with an event in Portland, Maine, highlighting safety concerns that tar sands bring to New England. Tar sands is a carbon intensive, especially dirty source of oil that is mined in the sensitive and ecologically important boreal forest of Alberta. Its development has resulted in serious pollution in Alberta and threatens to sully an area the size of Florida.

In addition, the groups today released information obtained through a Freedom of Access Act request, submitted by NWF, showing that Maine Governor Paul LePage met with the Portland Pipe Line Corporation in October 2011 to talk about tar sands oil, though the company continued to publicly deny that the project was moving forward throughout 2012.

“With a corporate identity like the ‘Portland Pipe Line Corporation,’ it’s easy to lose sight of who is really driving this tar sands pipeline proposal,” said Dylan Voorhees, clean energy director for the Natural Resources Council of Maine. “But the company’s corporate family tree reveals that the vast majority of the pipeline is ultimately owned by the world’s largest company—ExxonMobil, and, unfortunately, Exxon does not have Maine’s interests in mind. They will act to maximize their tar sands profits with little regard to the risk poised to Maine’s people, environment or natural resource economy.”

The research released today finds that the pipeline between Portland, Maine and Montreal has two direct corporate owners: Montreal Pipe Line Limited (MPLL), which owns the stretch in Canada, from the U.S. border to Montreal and the Portland Pipe Line Corporation, which owns the U.S. section and is a wholly-owned subsidiary of MPLL. In turn a direct subsidiary of ExxonMobil, Imperial Oil Limited, holds a majority interest (76 percent) in the pipeline. A smaller portion (24 percent) is owned by the Canadian giant Suncor Energy. 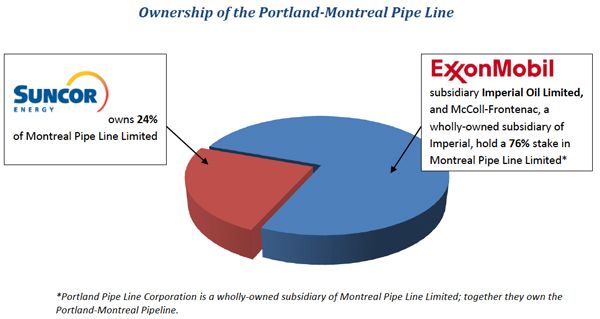 In addition, half of the ten-members of the Portland Pipe Line Corporation’s Board of Directors, work for oil companies in Alberta, home of the tar sands, while others are from Ontario or Texas. Only one board member is from Maine and he serves as president of the Portland Pipeline Corp.

“This information is a double whammy—not only is ExxonMobil, the largest oil company in the world, behind the plan to transport dangerous tar sands oil through Maine, but its local representatives have misled the public about the status of the project,” said Environment Maine director Emily Figdor.

For months ExxonMobil’s local subsidiary, the Portland Pipeline Corporation, has sought to deflect rising concerns in Maine about tar sands transport by denying that there is an “active” proposal to reverse the use the existing pipeline to transport tar sands. However, documents released today reveal that the company met with Governor LePage and the Maine Department of Environmental Protection last year specifically to discuss Canadian tar sands. That meeting happened in October 2011, several months after Enbridge submitted an application in Canada to reverse the Canadian portion of the project in order to carry dangerous tar sands oil eastward.

On the Canadian side of the border, advocates of the first phase of the project have repeatedly claimed that they want to bring tar sands east for Canadian use and denied that they are resurrecting the full tar sands reversal plan formerly known as “Trailbreaker.” But this just doesn’t fit the facts—including the fact that the Canadian consulate itself joined the Maine leadership meetings to talk about tar sands.

ExxonMobil, the company responsible for the disastrous Valdez oil spill that rocked the world in 1989, was also responsible for the July 2011 Silvertip Pipeline spill that dumped 42,000 gallons of oil into the pristine Yellowstone River in Montana. While that oil spilled happened to be conventional crude oil, the pipeline is also used to move corrosive tar sands “diluted bitumen,” which has proven nearly impossible to clean after it spills.

“Today’s revelation is doubly troubling because Exxon’s apparent partner in this tar sands pipeline scheme is Enbridge, the company that owns the line from Ontario to Montreal where it connects to Exxon’s line to Portland,” said Jim Murphy, an attorney with NWF. “Two years ago Enbridge spilled a million gallons of tar sands oil into the Kalamazoo River, with devastating impacts to the ecology, public health, recreation and property values. Independent review found that extreme negligence led to the spill. These aren’t the kind of companies we can trust with Maine’s natural resources.”

At the news conference, Environment Maine director Emily Figdor read a statement from Terri Young, a Bangor resident who worked on the Exxon Valdez civil case. Young explained, “It makes me just shudder to know that ExxonMobil is the owner of the pipeline in Maine and is now trying to bring dangerous tar sands oil in Maine. Their reckless disregard for safety and the environment caused untold damage in Alaska.”

“This pattern of misleading statements and trying to hide what is really going on is troubling,” said Glen Brand, executive director of Sierra Club Maine. “Clearly these pipeline companies are worried that if Maine people and others really see the full picture of what is going on to bring tar sands through the region, they will face even greater public opposition. Exxon and Enbridge have dirty track records with oil and tar sands, so it is understandable why they prefer their dealings to be behind closed doors.”

“Bringing dangerous, toxic tar sands oil through Maine is not in the interest of Maine’s people,” said Voorhees. “Not the people who drink water from Sebago Lake, not the people who fish and swim and paddle on the pristine rivers of Western Maine, not the households and businesses who rely on tourists and summer campers who visit Maine each year, nor the local businesses across the state who rely on a clean environment to produce and export, clean, healthy products, from clams or organic foods. Tar sands and the Maine brand don’t mix.”

“As a landowner and a businessman who depends on the clean waters along the Crooked River, I’ve very concerned about the possibility of tar sands running through this pipeline,” said Lee Margolin, owner of Pennesseewassee Brewing Company in Harrison, ME. “Ale has only four ingredients and one of them is clean water, so it is exceedingly important to quality of my product. I also happen to have a doctorate in biology and understand some of the chemicals involved in tar sands, and I’m a member of a local fishing club—no matter which hat I wear, this proposal makes me very worried.”

“These are companies that don’t have Maine’s interests in mind—to them Maine is just a pass-through on the way to global oil profits,” said Figdor.

Tar sand is a thick, sandy, oily substance being mined and drilled out of the rocks and soil of Alberta. Because of its physical properties, it must be diluted and then transported at very high temperatures and pressures. Even in its diluted form (“diluted bitumen”) tar sands is far more abrasive and corrosive than conventional oil, with a record of greater spills per mile of pipeline. The increased spill risk is compounded by the fact that if spilled, tar sands is more toxic and almost impossible to clean up—as evidenced by the on-going clean-up on the Kalmazoo. In addition, tar sands fuels create 20 percent more climate changing pollution than traditional oil. This is why tar sands is known as “the dirtiest oil on the planet.”