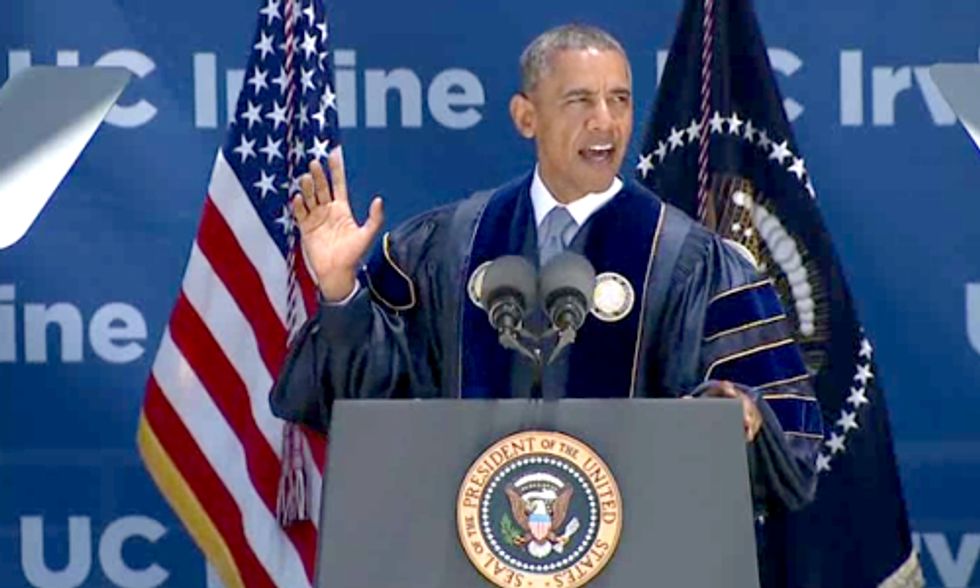 President Barack Obama's commencement address for the University of California, Irvine Saturday included a little of everything regarding climate change. He announced a $1 billion competitive rebuilding fund for communities hit by extreme weather, while challenging graduates to do their part in addressing what could be the largest issue of their lives.

The president also added in some sarcasm—lots and lots of sarcasm. For one, he compared climate deniers to people who told President John F. Kennedy that moon exploration was a waste of time. Today's crop of climate deniers are akin to people who would have told Kennedy in the ‘60s that the "moon wasn’t there or that it was made of cheese,” Obama said.

Obama begins speaking about climate change after the 7-minute mark of his 30-minute speech, uploaded in its entirety by The UpTake.

“The question is not whether we need to act,” the president told the crowd of 8,000 at Angel Stadium in Anaheim. “The overwhelming judgement of science, accumulated and reviewed over decades, has put the that to rest. The question is whether we have the will to act before it's too late.”

Obama also cleared up the confusion for those who wonder why some politicians hide behind the claim that they are not scientists.

"There are some who duck the question by saying, ‘Hey, I'm not a scientist,'" Obama said. "Let me translate that for you: What that means is, ‘I accept that manmade climate change is real, but if I admit it, I'll be run out of town by a radical fringe that thinks climate change is a liberal plot."

He can identify with them on not being a scientist, but Obama, instead, trusts the work of scientists, 97 percent of whom agree that climate change is real.

“I’m not a scientist either, but we’ve got some good ones at NASA," Obama said. "I do know the overwhelming majority of scientists who work on climate change, including some who once disputed the data, have put the debate to rest.”