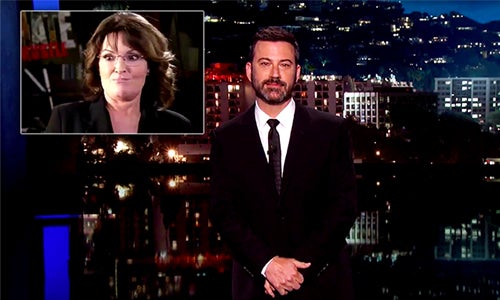 Jimmy Kimmel generally keeps things relatively light, comedy wise, on his late night show. But apparently, Sarah Palin’s appearance in a new climate change denial film called Climate Hustle got the host fired up enough to take up the dumb-dumbness that is both Palin and the entire climate change denial brigade, aka, the GOP. 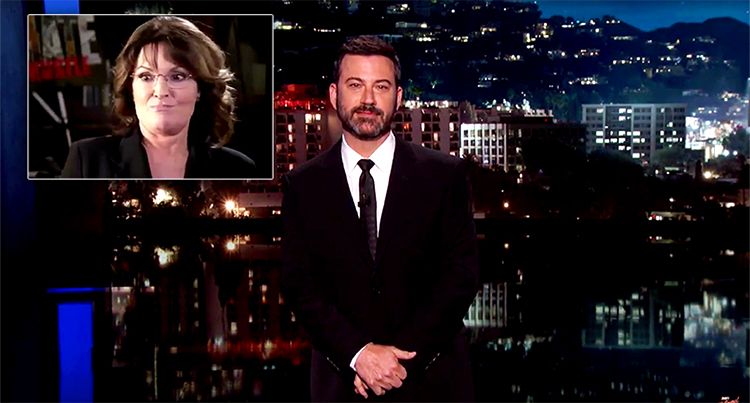 Kimmel shows two clips from the film of Palin who, in typical word-salad fashion, basically states that climate change is a big conspiracy that’s harming our kids most of all. She suggests that people are being deluded into not seeing through the whole sham just because 97 percent of scientists agree that it’s a real thing.

Again, this is brainiac Sarah Palin talking, telling you that you should took her word for it over pretty much every scientist on the planet.

“[T]he idea that she knows more than 97 percent of scientists is offensive. It’s dangerous,” Kimmel said. “No matter what Sarah Palin and these geniuses she surrounds herself with try to tell you, climate change is not a liberal-versus-conservative thing. But the people who profit from ignoring it want you to believe it is.”

The host kept going from there, weaving comedy with a pretty on-the-nail takedown of the entire climate-change-denial industry:

“A huge majority of climate scientists say climate change is happening. They say we’re causing it and we need to do something about it before it has a terrible effect on all of us. There’s no debate about the greenhouse effect, just like there’s no debate about gravity. It someone throws a piano off the roof, I don’t care what Sarah Palin tells you. Get out of the way, because it’s coming down on your head.

“Ninety-seven percent of climate scientists agree on this. And 97 percent of scientists don’t agree on much. Even one out of five dentists don’t believe in sugarless gum for their patients that chew gum. But almost half our representatives in Washington, apparently, know more about science than our scientists. Or they pretend to, because big corporations give them a lot of money to make sure they can keep doing the destructive things that they do.”

Kimmel offered a few more moments of levity (“What if I decided to deny the existence of yogurt? Think about it! I’ve seen the containers, I just don’t believe there’s anything in them.”) before turning the floor over to a bunch of actual scientists—people with actual degrees who can speak from a place of authority perhaps millions of miles beyond Palin—who reassure us, one by one, that they’re “not fucking with you.”

Good job, Jimmy Kimmel. It’s sad we have to keep saying this, but there you have it.

Check out the clip in its entirety here: