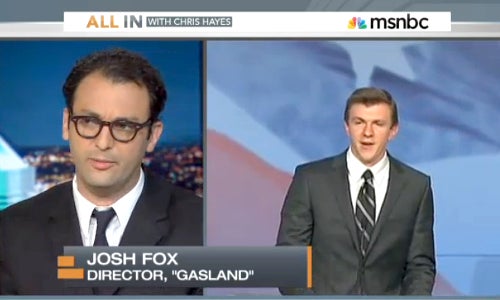 Gasland director Josh Fox recently found himself in a game of “Gotcha.” That is, until he turned the tables back around on the man who tried entrapping him.

Conservative activist James O’Keefe had loads of fun in recent years staging scams and releasing audio and video recordings of notable people who were supposedly caught in compromising or contradictory situations. He thought he had the perfect plan for Fox—an over-the-phone offer to fund a future project with so much oil money that even an environmentalist like Fox wouldn’t pass it up.

However, a listen to the recording lets you know just how poorly O’Keefe thought this thing out. He also didn’t anticipate that Fox would recording the conversation as well. That was perfect for exposing how O’Keefe edited the chat to give people the perception that Fox was a sellout.

MSNBC’s All In with Chris Hayes captures it all and lets Fox explain why he also recorded the odd conversation:

Fox reveals that representatives for O’Keefe’s fictitious financier had been sending emails for six months. He knew he was already involved in a “web of deception,” so hitting the record button once he received some phone time made a lot of sense.

“You do a brilliant job of setting that up, and it’s a laughing matter when you actually have the tape,” Fox told Hayes, “but let’s say I didn’t have it.

Gasland Part II: Our Democracy is On Fire