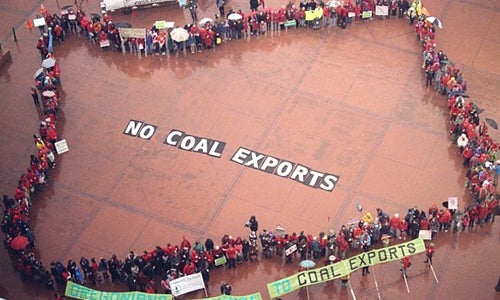 Momenta, a film which EcoWatch ranked as one of the 10 best documentaries of 2013, is now available online for free. The film brings awareness to a Pacific Northwest coal project that could threaten the global environment on a scale larger than the Keystone XL pipeline. A collaboration between Plus M Productions and Protect Our Winters, the documentary tells the story of those living along the coal export trail and the project’s global environmental implications. 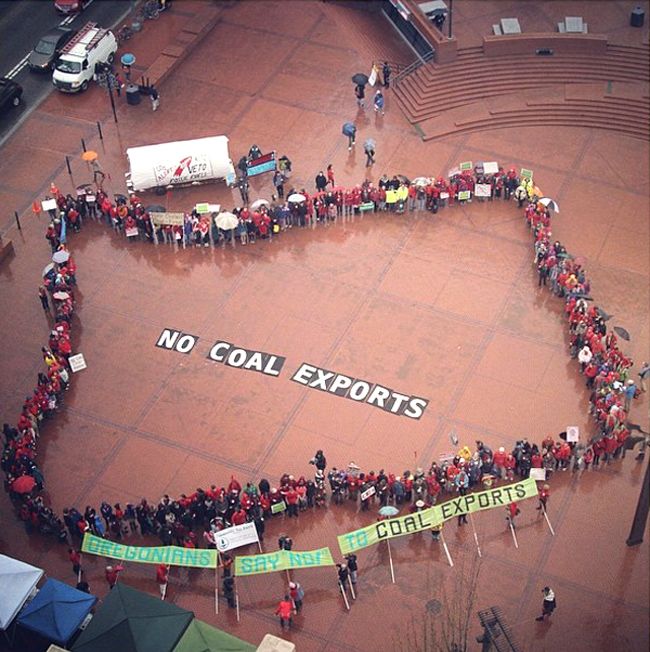 Protestors in Portland Oregon made the shape of the state of Oregon and voiced their opposition to coal exports. Photo credit: Momenta Project

The fight to stop these coal companies continues today. American demand for coal is declining so coal companies plan to extract 140 million pounds of coal per year from the Powder River Basin and ship it to rapidly expanding Asian markets via ports in Washington and Oregon, according to Spiltboard Magazine.

Each day, more than 18 mile-and-a-half-long trains, laden with Powder River coal, travel from Wyoming and Montana through hundreds of small towns to ports in the Pacific Northwest, leaving arsenic and mercury laden coal dust in their wake. The near-constant stream of escaping coal dust imposes toxic environmental pollutants and a myriad of health risks to nearby communities.

The film features interviews with prominent experts and environmental activists, including Bill McKibben and Jeremy Jones, a professional snowboarder, activist and founder of Protect our Winters. Through thoughtful interviews and breathtaking cinematography, the documentary unveils the coal project’s devastating potential.

The gravity of the crisis cannot be understated. “That coal has to stay in the ground,” said McKibben. “You can’t make the math of climate change work if you get the huge coal deposits of the Powder River Basin out and pour them into the atmosphere.”