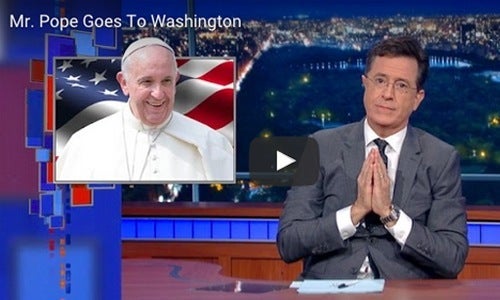 “As a Catholic, I couldn’t be prouder, except of course, for all the things I’m ashamed of,” joked Colbert. But Colbert admits not everyone is thrilled about the Pope’s visit and his strong stance on economic issues and climate change.

Colbert gets pretty worked up talking about Catholic Congressman Paul Gosar (R-AZ), who says he will boycott the Pope’s speech today to Congress.

Just a few weeks ago, Colbert participated in an interview with Salt and Light, in which he discussed Pope Francis’ upcoming visit, as well as matters of faith and politics. When asked the message that Congress most needs to hear when Pope Francis addresses a joint session, Colbert said:

The corrupting influence of money in politics because it reinforces not looking out for the poorest or the least of my brothers. I think that’s the one they need to hear the most because until you can control the money you won’t control the message of Congress, and so you won’t get action from Congress that looks out for average people.