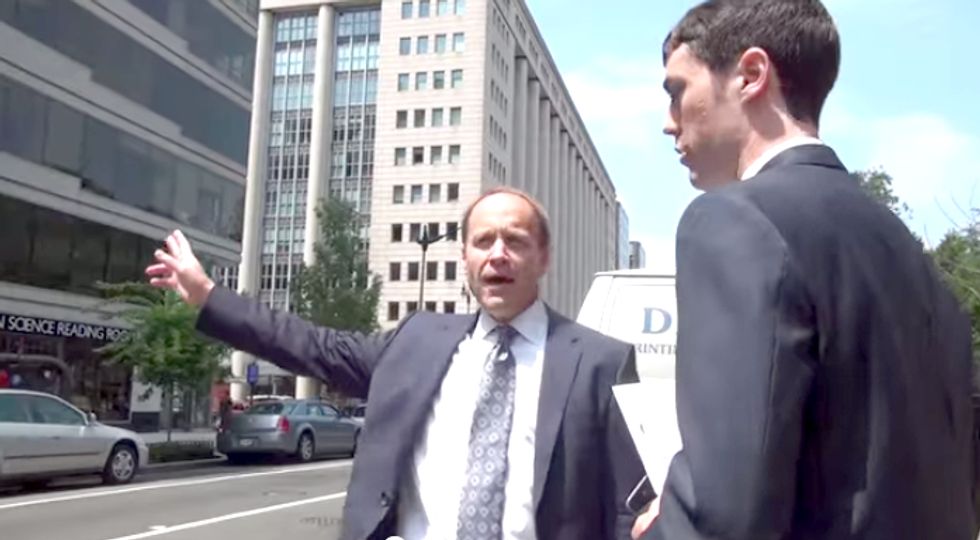 So, a Greenpeace activist and researcher approaches a coal industry lobbyist in an elevator and follows him out to the street during the hunt for a cab on a busy Washington D.C. street.

What could possibly go wrong?

The lobbyist is in question is Jeffrey Holmstead, a partner at Bracewell & Giuliani, a firm that the coal industry has given $17.5 million since 2007, according to Greenpeace's PolluterWatch project. The man doing the questioning is Connor Gibson, who three years ago was booted from an energy conference for confronting Holmstead about his work to block policy to control mercury when he worked for the U.S. Environmental Protection Agency under the Bush Administration.

This time, Gibson mainly wants to know why Holmstead and his clients, which include Southern Co. and Duke Energy, are more concerned with policing the EPA's carbon emissions proposal than investing more heavily in climate change solutions. Their elevator-and-street discussion, captured on video a week ago, is a telling display of question ducking, and a little humorous, too.

Holmstead never really answers Gibson's initial question, but he does attempt and fail to catch a cab, which ensures an uncomfortable conversation with Gibson and makes the video even more entertaining.

"My clients are dedicated to providing one of the most important things that people have and that is a supply of low-cost electricity," Holmstead explained.

When Gibson asked "at what cost" does that electricity come, Holmstead knew what the Greenpeace investigative researcher was hinting at—the dangers and pollution brought on by coal's emissions, spills and mountaintop removal. That could be why he passed the buck to other countries with high coal-energy concentrations with this response: "At a cost that seems to be reasonable all around the world."

A couple days after the conversation, Gibson took a step back and blogged about what had happened. He also embedded other video links that include Holmstead, like this one of a brief interview conducted by Gabe Elsner of the Energy and Policy Institute, who is basically shielded off from Holmstead when the questions become tough:

"With the science understood, with the financial stakes so high and with shocking estimates of the current human death toll from global warming, why does Jeffrey Holmstead make a career working for an industry that is killing people," Gibson asks in his blog. "I don’t have an answer, but I have sought one."