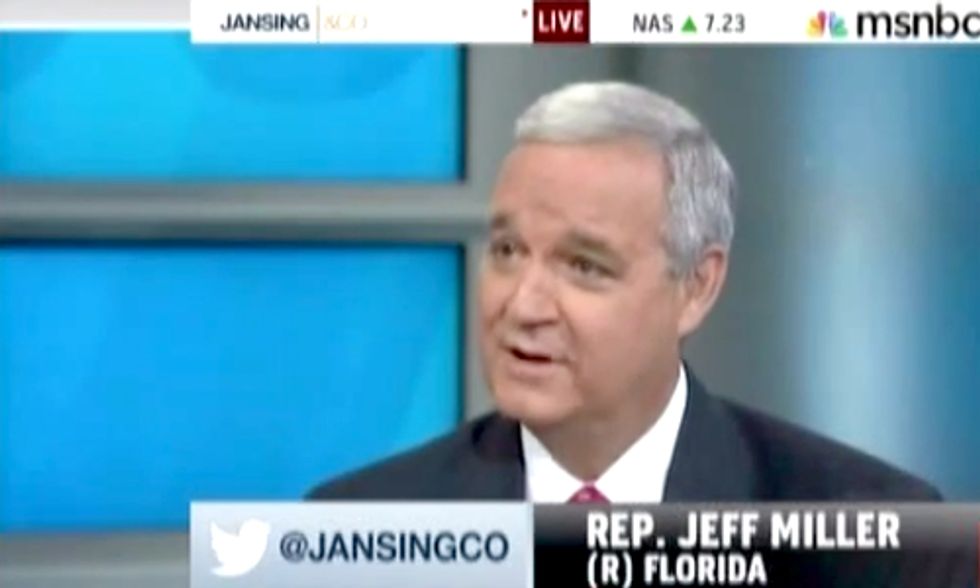 Sometimes you're just in too deep.

While there are exceptions, it appears that most Republicans have reached the point of no return when it comes to climate change. Unless a Congress member wants to go rogue from the party line, he or she is basically forced to deny the science of climate change. Anything different would hurt contributions from lobbyists and, in turn, the votes that would otherwise be counted on.

That's the only logical way to explain how we get statements like the latest from U.S. Rep. Jeff Miller (R-FL). His line of thinking—that humans don't cause climate change—is nothing new, but his approach to the argument is bizarre at best.

Strangely enough, some of the staunchest climate deniers come from Florida even though it's a state with a city (Miami) that will be threatened by a changing climate more than all others in the country, aside from New Orleans, LA, a 300-scientist governmental study found. Gov. Rick Scott darted questions about climate change last month, repeatedly saying he's not a scientist while not relying on information from actual scientists. Scott's bid for re-election is one of several targets of billionaire climate activist Tom Steyer, who plans on lobbying for the opponents of climate deniers around the country this November.

Meanwhile, U.S. Sen. Marco Rubio (R-FL) has questioned "the way these scientists are portraying it” and agreed with Miller that "our climate is always changing."

John Boehner: ‘I’m Not Qualified To Debate the Science Over Climate Change’