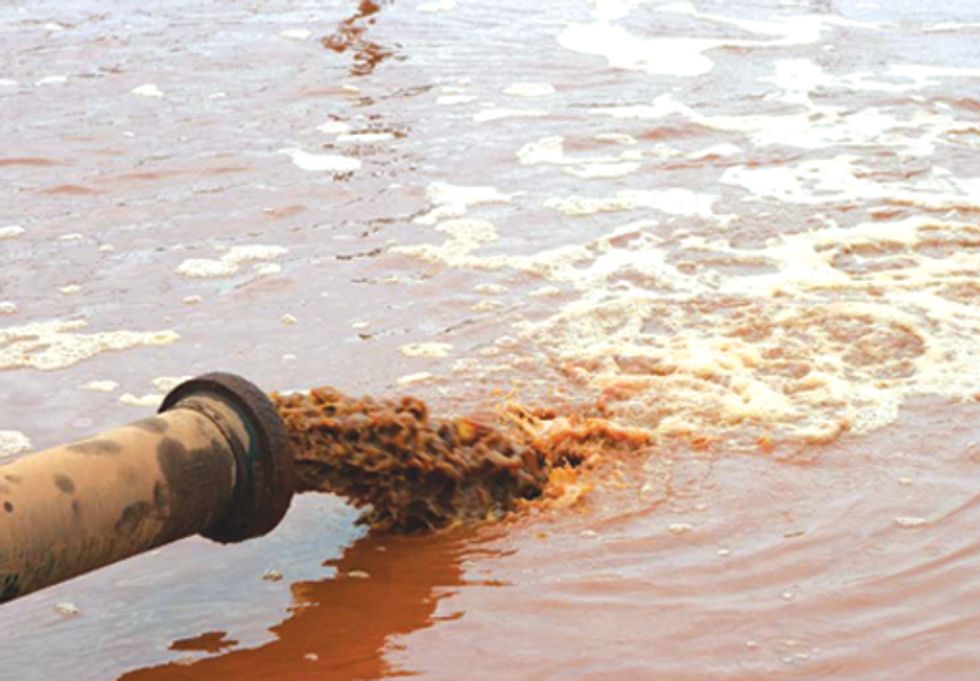 Industrial facilities continue to dump millions of pounds of toxic chemicals into America’s rivers, streams, lakes and ocean waters each year—threatening both the environment and human health. According to the U.S. Environmental Protection Agency (EPA), pollution from industrial facilities is responsible for threatening or fouling water quality in more than 14,000 miles of rivers and more than 220,000 acres of lakes, ponds and estuaries nationwide.

Industrial facilities dumped nine million pounds of toxic chemicals into Ohio’s waterways, making Ohio the ninth worst in the nation, according to a new report—Wasting Our Waterways: Industrial Toxic Pollution and the Unfulfilled Promise of the Clean Water Act—released in March by Environment Ohio.

Industrial facilities discharged approximately 3,700 pounds of chemicals linked to developmental disorders and reproductive problems into the Cuyahoga River. The Ohio River is ranked first in the nation for highest amount of total toxic discharges, with 32 million pounds discharged in 2010.

“Our city and region’s biggest asset is Lake Erie and its tributaries,” said Cleveland City Councilman Brian Cummins of Ward 14. “Water quality is critical to the health of the lake and our waterways and, although much progress has been made, there is still a lot to be done in enforcing and strengthening our existing laws.”

The continued release of large volumes of toxic chemicals into the nation’s waterways shows that the nation needs to do more to reduce the threat posed by toxic chemicals to our environment and our health and to ensure that our waterways are fully protected against harmful pollution.

Industrial facilities dumped 226 million pounds of toxic chemicals into American waterways in 2010, according to the federal government’s Toxic Release Inventory.
• Toxic chemicals were discharged to more than 1,400 waterways in all 50 states. The Ohio River ranked first for toxic discharges in 2010, followed by the Mississippi River and the New River in Virginia and North Carolina.
• This represents a small (2.6 percent) decrease in the overall volume of toxic releases since the previous edition of this report, released in 2009 and based on data from 2007.
• Nitrate compounds—which can cause serious health problems in infants if found in drinking water and which contribute to oxygen-depleted “dead zones” in waterways—were by far the largest toxic releases in terms of overall volume.
• Small as well as large waterways received heavy doses of toxics. Because of a large release of arsenic and metal compounds from a gold mine, combined discharges of developmental toxicants to three small creeks in Nevada were larger than combined discharges of such toxicants to the Ohio and Mississippi Rivers.
• Toxic releases continued in already damaged waterways.  The Calumet River system in Indiana and Illinois—home to five different Superfund toxic waste sites, and at one time so polluted that not even sludge worms could live there—ranked high on the list of developmental and reproductive toxic releases due to ongoing discharges from steel mills and an oil refinery.

Toxic chemicals linked to serious health effects were released in large amounts to America’s waterways in 2010.
• Industrial facilities discharged approximately 1.5 million pounds of chemicals linked to cancer to more than 1,000 waterways during 2010. Nevada’s Burns Creek received the largest volume of carcinogenic releases, with a small neighboring creek placing third. The Mississippi River, Ohio River and Tennessee River also suffered large releases of carcinogens. Pulp and paper mills, gold mines and chemical manufacturers were the industries that released the greatest volume of carcinogenic chemicals in 2010.
• About 626,000 pounds of chemicals linked to developmental disorders were discharged into more than 900 waterways. Burns Creek in Nevada, a small waterway near a gold mine, received the greatest amount of developmental toxicant discharges, followed by the Kanawha River in West Virginia and the Mississippi River. Gold mining was the largest source of developmental toxicants, followed by pesticide manufacturing and fossil fueled power generation.
• Approximately 342,000 pounds of chemicals linked to reproductive disorders were released to more than 900 waterways. West Virginia’s Kanawha River received the heaviest dose of reproductive toxicants, followed by the Mississippi, Ohio and Brazos rivers.
• Discharges of persistent bioaccumulative toxins (including dioxin and mercury), organochlorines and phthalates are also widespread. Safer industrial practices can reduce or eliminate discharges of these and other dangerous substances to America’s waterways.

To protect the public and the environment from toxic releases, the U.S. should require industries to reduce their use of toxic chemicals, plus restore and strengthen the Clean Water Act protections for all of America’s waterways and improve this landmark law’s enforcement.
• The Obama administration should clarify that the Clean Water Act applies to headwaters streams, intermittent waterways, isolated wetlands and other waterways for which Clean Water Act protection has been called into question as a result of recent U.S. Supreme Court decisions.
• EPA and the states should strengthen enforcement of the Clean Water Act by, among other things, ratcheting down permitted pollution levels from industrial facilities, ensuring that permits are renewed on time, and requiring mandatory minimum penalties for polluters in violation of the law.
• EPA should eliminate loopholes—such as the allowance of “mixing zones” for persistent bioaccumulative toxic chemicals—that allow greater discharge of toxic chemicals into waterways.

The U.S. should revise its strategy for regulating toxic chemicals to encourage the development and use of safer alternatives. Specifically, the nation should:
• Require chemical manufacturers to test all chemicals for their safety and submit the results of that testing to the government and the public.
• Regulate chemicals based on their intrinsic capacity to cause harm to the environment or health, rather than basing regulation on resource-intensive and flawed efforts to determine “safe” levels of exposure to those chemicals.
• Require industries to disclose the amount of toxic chemicals they use in their facilities—safeguarding local residents’ right to know about potential public health threats in their community and creating incentives for industry to reduce its use of toxic chemicals.
• Require safer alternatives to toxic chemicals, where alternatives exist.
• Phase out the worst toxic chemicals.