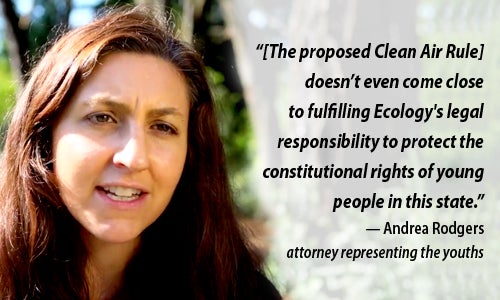 The Inslee administration released its revised Clean Air Rule Wednesday, which defies an unprecedented May 16 court order issued by King County Superior Court Judge Hollis R. Hill and fails the children of Washington. Judge Hill ordered the state to adopt a rule “to limit greenhouse gas emissions in Washington” by the end of the year. 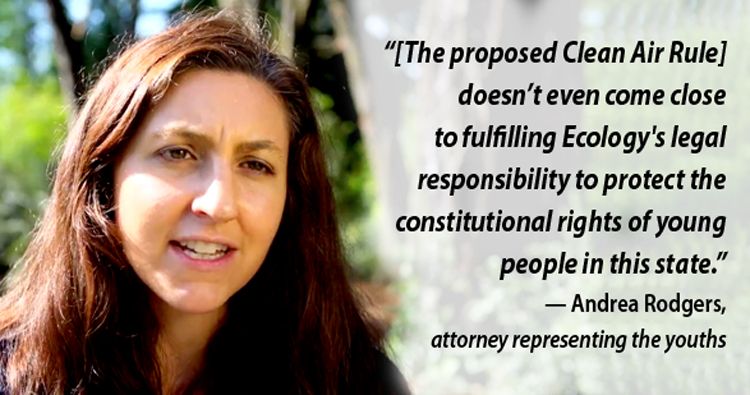 The proposed Clean Air Rule, however, is based on outdated emissions data and only requires emissions reductions of a mere 1.7 percent annually, completely disregarding current science that would put Washington on a path toward climate stability.

Further, loopholes in the proposed rule may actually foster an increase in greenhouse gas emissions within the state. For example, a third of instate emissions are not even covered under the proposed rule. Also, Washington polluters may obtain emission reductions from out-of-state emissions market programs and certain sectors (imported petroleum) don’t have to reduce emissions for several years.

“We are extremely disappointed with Ecology’s revised Clean Air Rule,” Andrea Rodgers, the Western Environmental Law Center attorney representing the youths in their lawsuit against the state, said. “This doesn’t even come close to fulfilling Ecology’s legal responsibility to protect the constitutional rights of young people in this state. The youths will participate in the rule making process and will continue to hold Ecology accountable for complying with the law.”

Inslee ignored the youths’ requests to meet with him to discuss the state’s responsibility to protect the constitutional rights of young people in Washington.

“Emission reductions of only 1.7 percent per year are not much different than business as usual,” Dr. James Hansen, director of the Climate Science, Awareness and Solutions program at Columbia University, said. “They would leave young people with an intolerable burden to somehow suck enormous quantities of CO2 from the air if they are to avoid a climate system running out of control. The state should live up its obligations to young people, reducing emissions 8 percent per year, which is what the science indicates is needed to stabilize climate.”

The young plaintiffs, who are all members of Plant for the Planet Academy, are asking their supporters to submit a public comment on the proposed rule to let the Inslee administration know that paltry 1.7 percent emission reductions aren’t based on science or reason.

“All developed nations and states should be doing no less than the global average emission reductions required to return to a safe level of 350 ppm by 2100,” Julia Olson, executive director and chief legal counsel at Our Children’s Trust, said. “In fact, those who have caused the lion’s share of the problem and have the wealth to transition more quickly, should be declining at a more rapid pace.”

This case is one of several similar state, federal, and international cases, all supported by Our Children’s Trust, seeking the legal right to a healthy atmosphere and stable climate.