Was Bill Nye Paid by Monsanto to Change His Mind on GMOs? 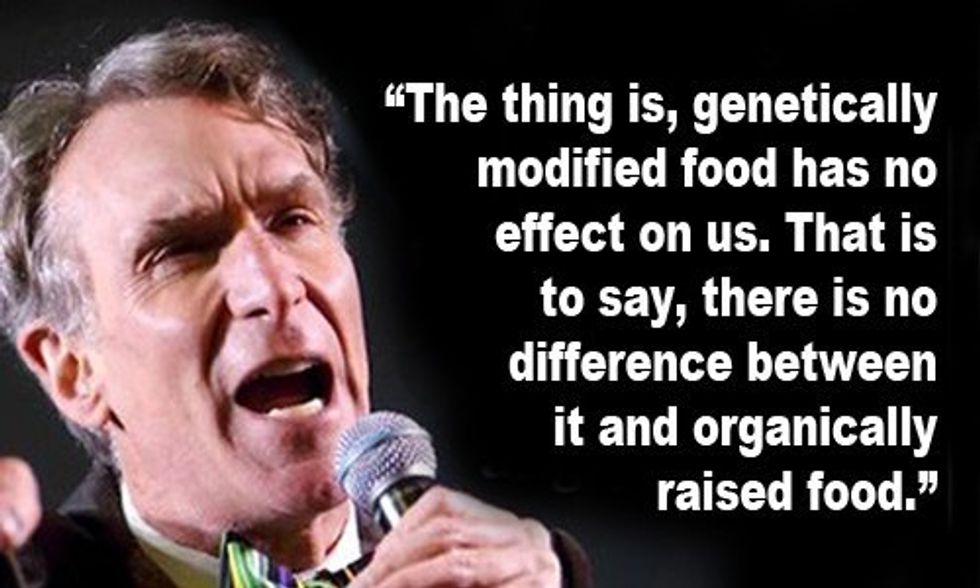 Of the many controversies surrounding genetically modified organisms (GMOs), one of the biggest shockers was when Bill Nye changed his mind and came out in favor of GMOs. Now, in a new podcast, Bill Nye the Science Guy answers his fans' burning questions about his GMO flip-flop, including whether or not he's actually a hired gun for Monsanto.

Why yes, I have changed my opinion on GMOs and you can hear all about on @StarTalkRadio right now: http://t.co/72QCAukpkL

Nye temporarily took over hosting duties on Neil DeGrasse Tyson's radio show StarTalk to make his position about GMOs absolutely clear. Here are some interesting things he said during the one-hour podcast:

After meeting with Dr. Robert T. Fraley, the executive vice president and chief technology officer at Monsanto, and the winner of the 2013 World Food Prize, Nye said, "In my opinion, [he's] really not such a bad guy. He believes that we can raise more food than ever on less land. In other words, we have almost 7.2, almost 7.3 billion, people on earth today. His colleagues believe they can raise food for 9 billion people on 2 percent less land ... That's a noble goal."

"[Fraley] argues that glyphosate's really is not such a bad thing. Compared to all the other herbicides, glyphosate's pretty benign, which I've done research on and I've decided that's true. I've changed my mind about genetically modified foods, that's the top line."

On the health risks of genetically modified food

"I looked into it. There's no difference between allergies among GMO eaters and non-GMO eaters. There is a big difference in inputs from an agricultural standpoint. Organic farming takes a lot more water, takes a lot more tillage. Actually you end up with less diversity of microbes in the soil with modern Roundup-ready crops because you don't have to till, you don't have to turn the soil over to kill the weeds."

"The thing is, genetically modified food has no effect on us. That is to say, there is no difference between it and organically raised food. This is scientifically provable. It's certainly provable to my satisfaction, and that's the most straightforward thing about it, to see if it's still nutritious and see if it has any allergic effect, and it absolutely does not. In fact, in general, all of these foods are more nutritious."

On the public's negative perception of GMO companies

"This is what humans do. We hybridize plants either the old fashioned way ... or the modern way with biotechnology. So what has happened at companies like Pioneer Seeds (which is part of DuPont) ConAgra and especially Monsanto, they have made the transition from being industrial chemical manufacturers—fertilizers and pesticides—into biotech firms."

Companies like "Monsanto used to make Agent Orange, so did Dow Chemical … But in general it is part of a dark past. They were hired by the government to make this stuff and they did and they don't do it anymore."

On the evolution of farming itself

"What they are able to do now … they can sequence the gene of an individual plant at extraordinary speed. So 20 years ago it would take you a month to get the gene sequence of lets say a soybean plant. Now they can get a hundred thousand in 10 minutes … They can do it 10 million times faster than they did 20 years ago. They can assay 10 million genes in a morning, and so then they are able to select which ones are definitely not promising and eliminate [ones that] are the most susceptible to diseases just by genetic analysis."

On what else he learned during his Monsanto tour

"Then they plant the promising ones in super-controlled sterile greenhouses, and the ones that have suitable qualities they propagate and it takes about five years of that and then the FDA or the Department of Agriculture does another three years, sometimes five years, then they agree it's worth planting."

"I think it's well substantiated by the [genetically modifying companies] …. They claim—very reasonably—that they can make crops that are drought-tolerant. They can hold their water, they don't let it evaporate through their leaves or stems the extent native plants might and they strongly believe they can reduce the amount of water needed."

On the rumors that Monsanto is paying him

"No!" Nye then described a dinner meeting with Monsanto and how everyone bought their own dinner. "However when I visited Monsanto, they offered me a sandwich and a cup of coffee and I enjoyed both. But I flew myself there."

On the public's charges against Monsanto

"By the way, I went to an anti-Monsanto rally in New York City and I was really impressed by how thoughtless and short-sighted the people there were ... It got to the point where they wanted you to believe the President of the United States is controlled by Monsanto."

"I think it's fine. I've said to those guys at Pioneer and Dow and Monsanto, I told them why don't you put 'Proudly GMO' on them and see what happens. Let the market sort it out, if the people don't want it we'll see what happens."