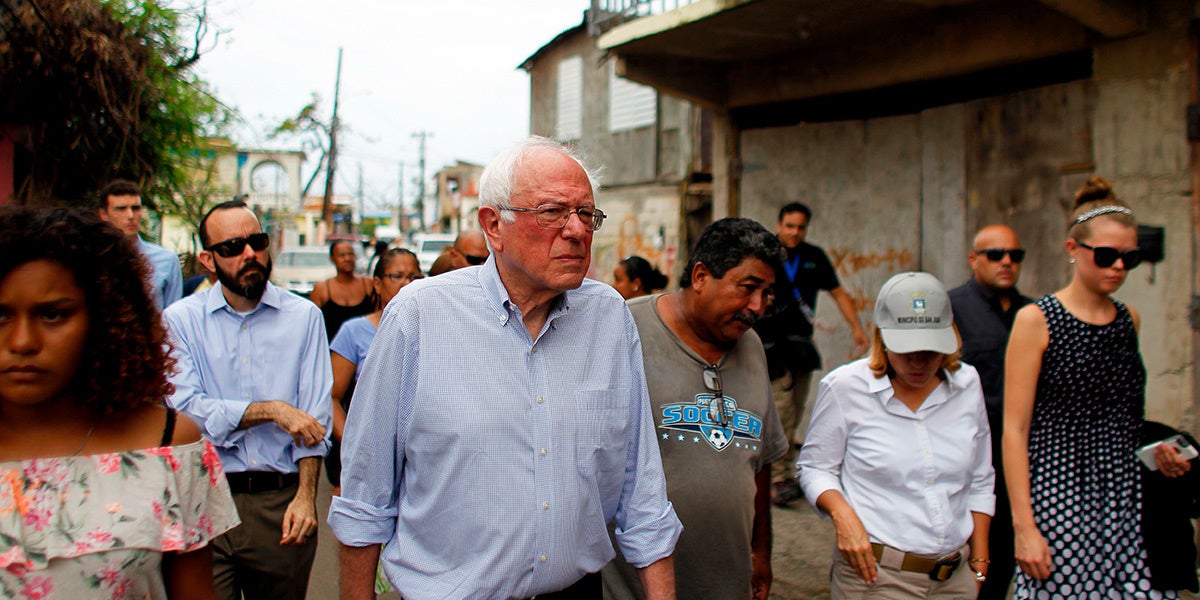 As advocacy groups urgently warn that Wall Street firms are moving to capitalize on Puerto Rico’s plight in the aftermath of Hurricane Maria by extracting debt payments and pushing for the privatization of public services, Sen. Bernie Sanders (I-Vt.) joined Sen. Elizabeth Warren (D-Mass.) and several other Democratic senators on Wednesday to introduce a bill that would “provide an avenue to comprehensive debt relief” for the island.

“Greedy Wall Street vulture funds must not be allowed to reap huge profits off the suffering and misery of the Puerto Rican people for a second longer,” Sanders said in a statement on the new bill, which would also provide debt relief for the U.S. Virgin Islands and other territories ravaged by recent hurricanes. “It is time to end Wall Street’s stranglehold on Puerto Rico’s future, return control of the island to the people of Puerto Rico, and give the territory the debt relief it so desperately needs to rebuild with dignity.”

Puerto Rico is trying to rebuild after Hurricane Maria, but it's being crushed by debt. @SenSanders & I have a new bill to give territories that have suffered a major crisis a route to comprehensive debt relief and a chance to get back on their feet. https://t.co/axsXI4rfIL

As reporter David Dayen noted in The Intercept, the senators’ new legislation is a striking departure from efforts to address Puerto Rico’s debt crisis under President Barack Obama, who in 2016 signed legislation that “led to punishing austerity proposals, mass protests and a wave of privatization, with assets sold off to finance interest payments.”

The legislation introduced by Sanders, Warren, and other prominent Senate Democrats would partially lift the island’s massive burden by making most of its $73 billion in debt eligible for cancellation.

“Puerto Rico was already being squeezed before Hurricane Maria hit and will now have to rebuild under the weight of crushing debt. Our bill will give territories that have suffered an extraordinary crisis a route to comprehensive debt relief and a chance to get back on their feet,” Warren said in a statement. “Disaster funding and the other resources in struggling territories’ budgets must not go to Wall Street vulture funds who snapped up their debt. Congress should pass this legislation right away—our fellow U.S. citizens are counting on us.”