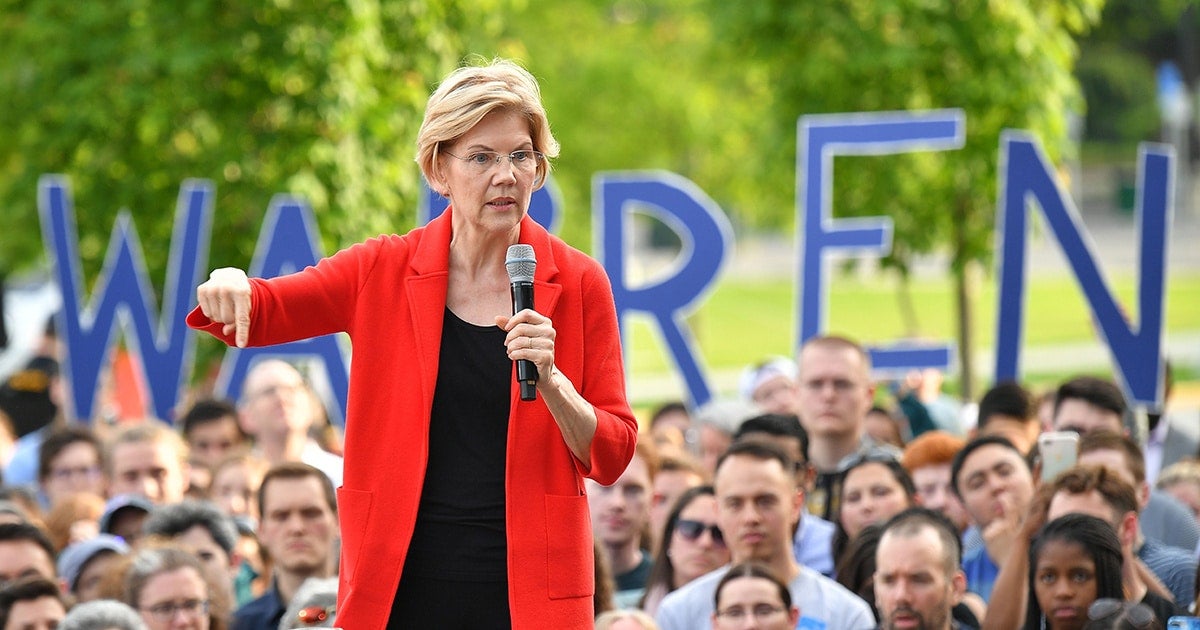 As new polling showed Tuesday that public support for Sen. Elizabeth Warren’s presidential campaign has continued to rise as she’s introduced a series of ambitious policy proposals, the Democratic candidate unveiled a $2 trillion renewable energy and green manufacturing plan welcomed by climate campaigners as a boon for both the planet and U.S. workers.

“With this plan, Elizabeth Warren is seizing the enormous opportunity that transitioning to 100 percent clean energy represents for people across the country,” Greenpeace USA senior climate campaigner Jack Shapiro said in a statement. “The renewable energy economy is a win-win for our climate and communities, and should be at the core of any plan to create jobs and spur innovation.”

In a Medium post published Tuesday, Warren detailed her green manufacturing plan, which she described as “part of how I’ll implement my commitment to a Green New Deal” and just the first of several proposals under her new economic patriotism agenda.

With bold investments, we can fight climate change, achieve the ambitious targets of the Green New Deal, and create more than a million good jobs here at home. I have a plan to invest at least $2 trillion in green research, manufacturing, and exporting: https://t.co/d4Nke32oE1

My green manufacturing plan rewards American companies who invest at home. It's funded by my Real Corporate Profits Tax on giant companies who try to dodge their fair share in taxes. It'll create 1M new jobs & make the U.S. the leader in the global fight against climate change.

One area where the Green Manufacturing Plan could be stronger is the scale of the Green Marshall Plan. While $100 billion dollars is a good start, an independent analyses show that we should be going even further to help other countries transition. See: https://t.co/CkFRBLjGh2 pic.twitter.com/f5td3uc19w

Some big, “American” companies will ship jobs overseas and hollow out our cities if it'll save them a nickel. And many already have. I've got a plan to make sure a Warren administration will defend and create good American jobs. pic.twitter.com/mztmtUHwGW

Zach Carter, in a piece for HuffPost Tuesday, pointed out that Warren’s broad economic platform follows a series of “ambitious, meticulously detailed” plans on everything from breaking up big tech giants like Amazon and Google to forgiving student debt and establishing universal childcare. However, he argued, the economic platform that she discussed in Detroit Tuesday “is a little different.”

The Massachusetts Democrat’s economic agenda for the nation “retains Warren’s wonk-flair,” Carter wrote, “but the heart of her proposal is ideological rather than technical. Warren is making a crystal-clear statement of principles, and an equally plain break with the past 30 years of American trade policy ― up to and including the presidency of Donald Trump.”

The presidential hopeful’s “astonishing plan for economic patriotism” was celebrated by Robert Kuttner, co-founder and co-editor of The American Prospect, as “in a class by itself, even for Warren.”

“Warren’s proposal does nothing less than turn inside out the globalist assumptions pursued by the past several administrations, Democrat and Republican alike,” Kuttner wrote Tuesday. “With this plan, Warren has begun an overdue debate that she deserves to win, both intellectually and politically. And she has demonstrated once again her potential as a powerful force against Donald Trump.”