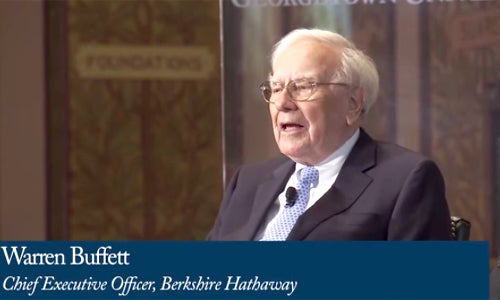 Big money will mean a bigger, quicker transition to renewable energy in the U.S., and few statements are larger than the one Warren Buffett made Monday.

Speaking at the Edison Electric Institute’s annual convention in Las Vegas Monday, Buffett, the $65.6-billion man, proclaimed that he would double his investment into strengthening renewable energy across the country. With wind and solar farms in Iowa, Wyoming, California and Arizona, Buffett admittedly had trouble recalling just how much he had already invested, according to Bloomberg. One of his deputies, Greg Abel, told him the amount was $15 billion.

“There’s another $15 billion ready to go, as far as I’m concerned,” Buffett responded. 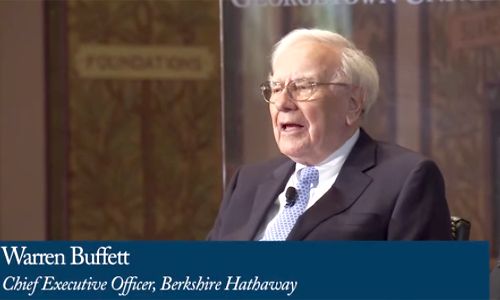 One of the wealthiest men in the U.S., Warren Buffett said Monday that he would double his renewable energy investments. Video screenshot: Georgetown University/YouTube

Buffett recently received praise from clean energy advocates all over when his company announced that it would close Reid Gardner, a 557-megawatt, coal-fired energy plant near Las Vegas known as one of the nation’s dirtiest. Buffett’s Berkshire Hathaway inherited the plant as part of its acquisition of Nevada’s largest utility, NV Energy.

Buffett also owns natural gas pipelines across the country, but Bloomberg believes that Buffett keeps an eye far into the future when it comes to his investments. With renewables positioning themselves as the energy choice of the future, Buffett likely prefers the reinvestment and acquisition opportunities that will accompany solar and wind for years to come. His investments will also play a key role in the government’s desire to decrease carbon emissions by 30 percent, compared to 2005 levels.

“We’re going to keep doing that as far as the eye can see,” Buffett said. “We’ll just keep moving.”

“If he says it, he means it,” Matthews said. “The whole complexion of the company has changed.”