Warning: Climate Change Is Hazardous to Your Health 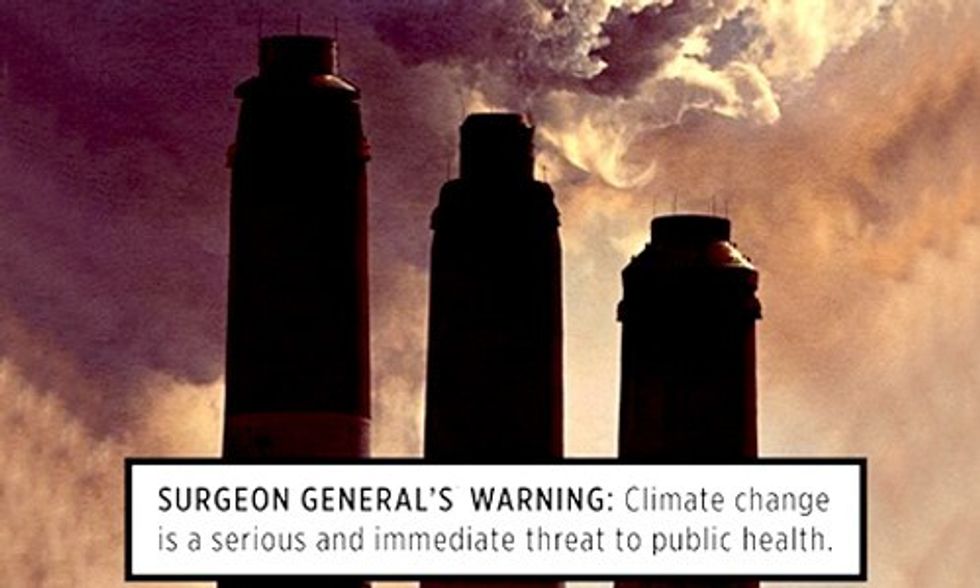 As 100-degree temperatures broke Washington, DC records on Tuesday, I was pleased to be at the White House Public Health and Climate Summit listening to Surgeon General Murthy tell the American people that climate disruption poses an extremely dangerous risk to Americans’ health. If this sounds familiar, it should. Fifty years ago Americans received a similar warning from then Surgeon General Terry, on the terrible health risks of smoking tobacco.

Yesterday the @Surgeon_General made clear the public health need to #ActOnClimate: http://t.co/7OycIIr1ip pic.twitter.com/djvw6nJiW4

With Surgeon General Terry’s warning, our country was made bluntly aware of the dangers of cigarettes and Tuesday, Surgeon General Murthy was just as direct about the severe health consequences of climate disruption. Climate disruption is fueled primarily by carbon pollution coming from fossil fuels and fossil fuel power plants contribute 40 percent of all U.S. carbon emissions. Therefore, it’s logical to think dirty fossil fuel burning power plants now deserve a bold-print warning label that lets Americans know of the dire consequences similar to a pack of cigarettes.

As climate policy director at Sierra Club, people often ask me if I still use my public health degree and today the Surgeon General answered that question for me by making it abundantly clear that good climate policy is good health policy. The reverse is also true: if we keep burning fossil fuels like we are today, we will destroy our health and the health of our children. This message connecting two important facets of good government is what attracted pillars of the American medical community to the summit including the American Lung Association, the American Public Health Association and the American Academy of Pediatrics. It goes without saying that I was honored to be there with them and join them in celebrating the historical significance of Surgeon General Murthy’s words.

VIDEO: conversation between the President and @Surgeon_General on climate change and public health http://t.co/K52r1QHs3m

The event itself united health professionals, academics, the environmental community and other important stakeholders to discuss the important role the public health community has in communicating and preventing health-related climate impacts. Also this week, one of the most respected medical journals, the Lancet, released a report which found that by acting to stop climate disruption the world can save countless lives, reduce the spread of disease and ensure a secure food supply by moving to clean energy and creating a healthier future for people in every part of the world.

However, despite all of this evidence and just days after the release of the Pope’s powerful encyclical saying that climate inaction is immoral, Congress has once again voted to block climate action. Today, the U.S. House of Representatives passed H.R. 2042, Rep. Whitfield’s Polluter Protection Act, and voted to block the Obama administration's Clean Power Plan, the first-ever limits on carbon pollution from power plants. Also today, in the Senate, the Subcommittee on Clean Air and Nuclear Safety of the U.S. Senate Committee on Environment and Public Works is holding a hearing on S. 1324, the Senate version of the Polluter Protection Act, sponsored by Sen. Capito and the climate denier in chief, Senator James Inhofe, who hopes to move this legislation to the floor of the Senate in July.

Climate change deniers in Congress need to stop acting as pawns in industry’s game while the severe effects of climate disruption wreak havoc on the health of our families and our communities. Make no mistake, industry-funded scientists are simply giving excuses for members of Congress to oppose climate action just like they were used years ago to protect the tobacco industry. All this is happening while most Americans, including a majority of Republicans, support taking action on global warming.

This is why the Surgeon General Murthy’s warning speech is so significant. Just as his distant predecessor initiated the push to stomp out the normalcy of cigarette smoking in American life, Surgeon General Murthy did the same today with our everyday use of coal, gasoline and natural gas. With his leadership, we can overcome the denier campaigns that attempt to twist and augment scientific fact, and take the necessary steps to protect our planet from climate disruption. When I left the cool air conditioning of the summit and walked back out into the 100-degree swelter of Washington, DC in summer, I breathed a sigh of relief knowing that something is really being done to protect my kids and future generations from climate disruption.