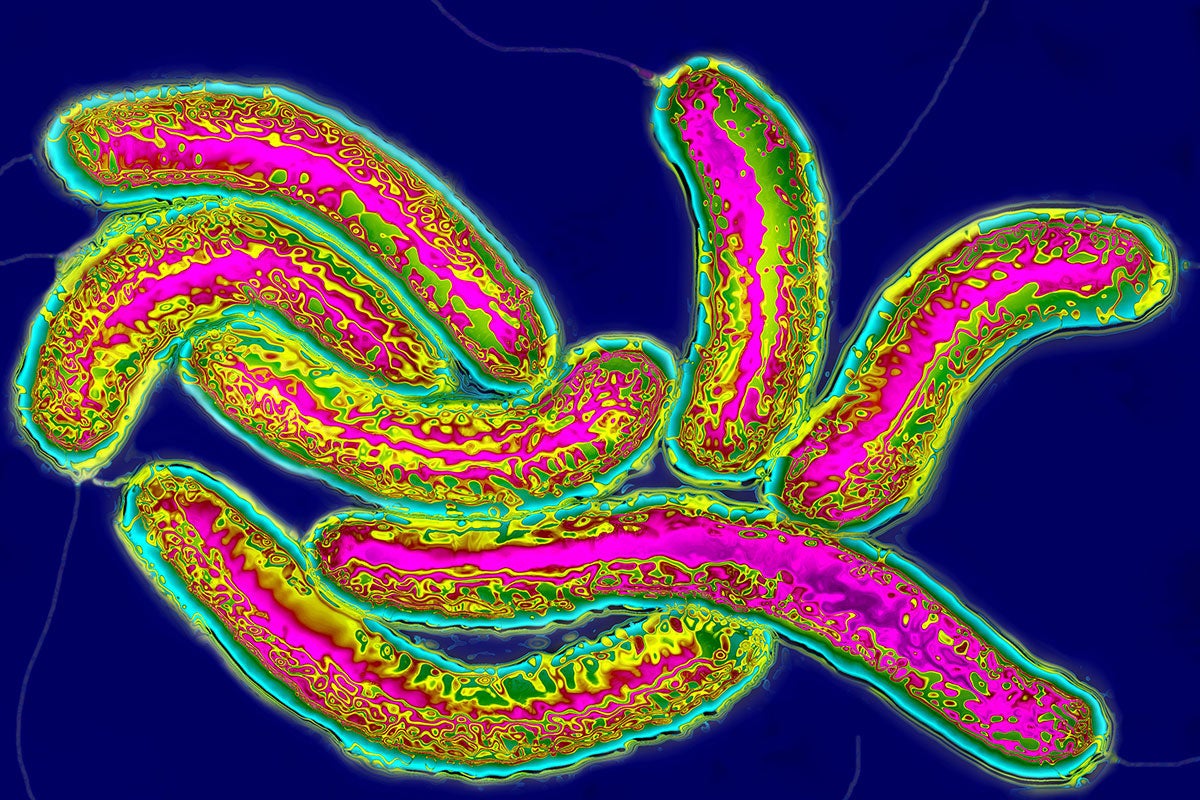 Rising sea surface temperatures in the North Atlantic are likely to be behind a recent surge in cases of diarrhoeal diseases from marine bacteria in northern Europe and the U.S. East Coast, a new study says.

In their analysis that goes back to 1958, the researchers show that levels of Vibrio bacteria—which can cause illness in humans and even death—have been increasing as sea surface temperatures rise. 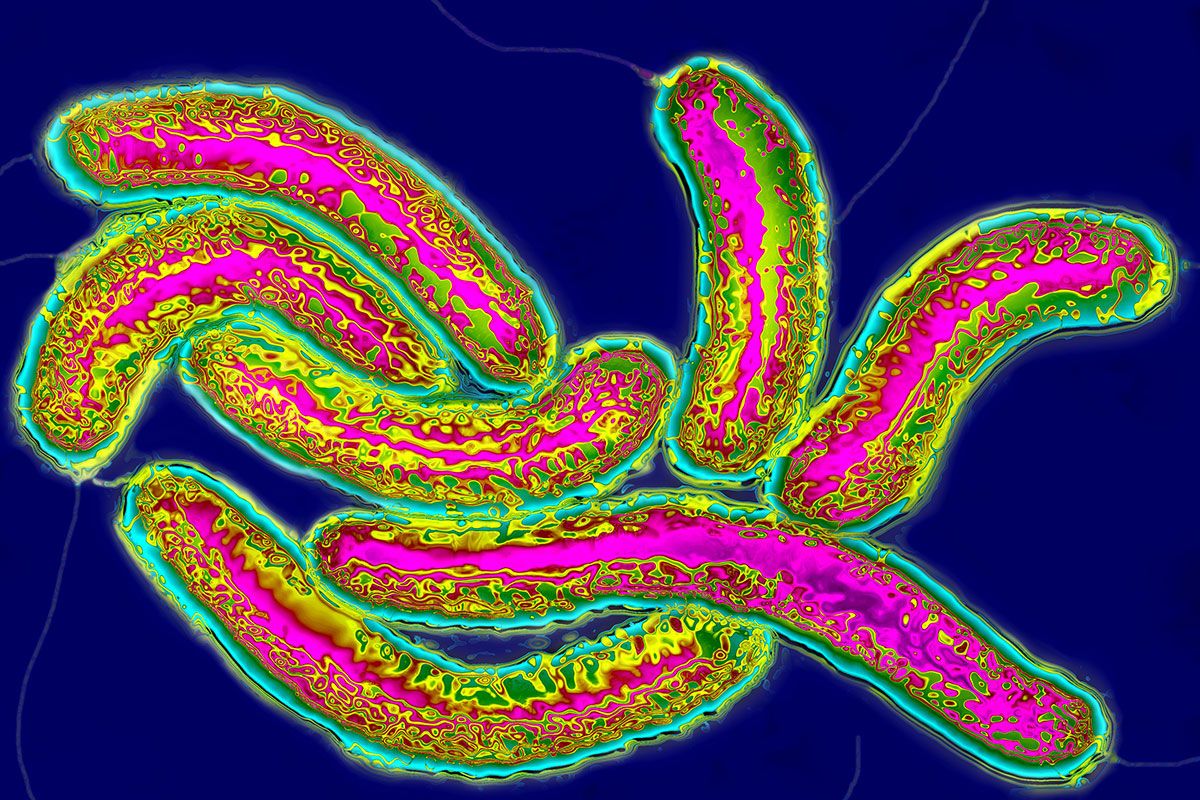 Further ocean warming as a result of climate change could exacerbate this spread of marine bacteria, the researchers say, potentially bringing more human infections in future.

There are around 110 different types of Vibrio bacteria floating around in our oceans. They are typically found in warm, slightly salty coastal waters and river estuaries.

Some of these bacteria cause sickness in people and animals. Humans pick them up by consuming water or seafood that carries the bacteria or through cuts in the skin when swimming.

The most well-known Vibrio is cholera, a diarrhoeal disease that can cause severe dehydration and death if not treated.

This study considers other strains of Vibrio bacteria, such as Vibrio vulnificus and Vibrio parahaemolyticus, which cause similar, though usually less severe, symptoms. These types of illness are known collectively as “vibrosis,” which can lead to complications, such as blood poisoning.

Previous research has linked outbreaks of Vibrio infections around the world to warm sea surface temperatures. Warmer conditions mean a longer summer window for Vibrio bacteria to grow and a greater chance of their survival. This conclusion has been reached in studies of Chile, Peru, Israel and the Baltic states.

The new study, just published in Proceedings of the National Academy of Sciences, says that a warming Atlantic Ocean is the main reason for an “unprecedented” number ofVibrio cases in North Atlantic countries in recent years. This includes a spate of cases contracted by swimmers during the European summer heat wave in 2006.

One of the main limitations for scientists trying to work out how ocean warming is affecting Vibrio bacteria is the availability of data.

Bacteria are typically measured by microbiologists by collecting and analyzing water samples, said lead author Dr. Luigi Vezzulli, an associate professor in microbiology at the University of Genoa. However, as he explains to Carbon Brief, this isn’t without difficulty:

“This approach is costly and time consuming and historical Vibrio data are generally lacking.”

Vezzulli and his colleagues found a way round this problem by instead analyzing samples of tiny marine creatures called zooplankton, on which Vibrio bacteria tend to hitch a ride.

Scientists have been collecting samples of plankton in the North Atlantic since 1958 via the Continuous Plankton Recorder (CPR) survey. The CPR actually gets its name from the instrument that, when towed behind ships, collects plankton over huge areas of ocean.

Using the samples from nine locations—shown in the map below—the researchers analyzed the DNA of the preserved plankton to create a record of how Vibrio bacteria numbers have changed over the past six decades. 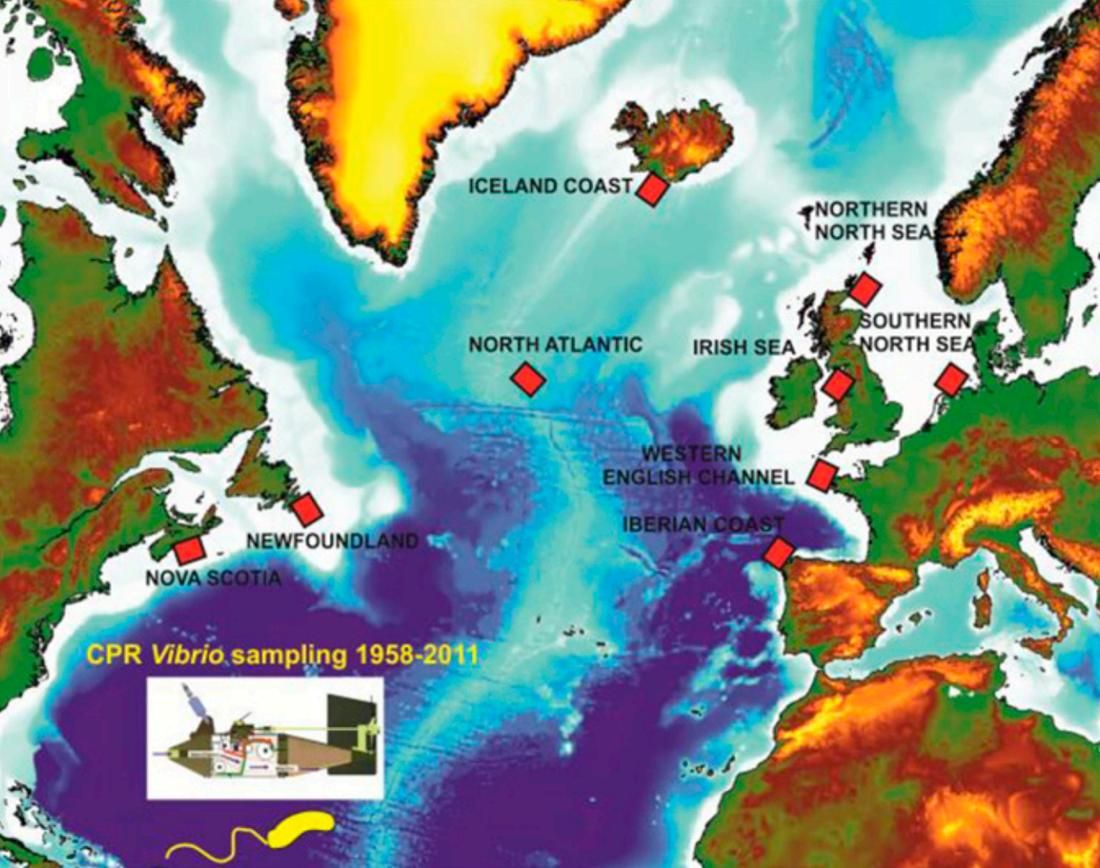 Vibrio sampling areas in the North Atlantic. Each red rectangle indicates where samples were collected over the period 1958-2011. The inset image shows the CPR instrument.Vezzulli et al. (2016)

The findings show that concentrations of the different Vibrio bacteria have increased in line with rising sea surface temperatures (SSTs) for eight of the nine North Atlantic locations.

The only exception was at Newfoundland. This is likely because, despite a warming ocean, SSTs in this region still average around 7C, the paper says, which is a bit cold for most Vibrio bacteria.

You can see how sea surface temperatures in the North Atlantic have changed over the 21st century in the map below. Coastal regions of western Europe and Canada have warmed the most—by as much as 1.5C in some places, as shown by the red shading. Vezzulli said it’s clear that SSTs and Vibrio bacteria are linked:

“From long-term data it is apparent that the level of these pathogens is rising in the ocean as a result of global warming.” 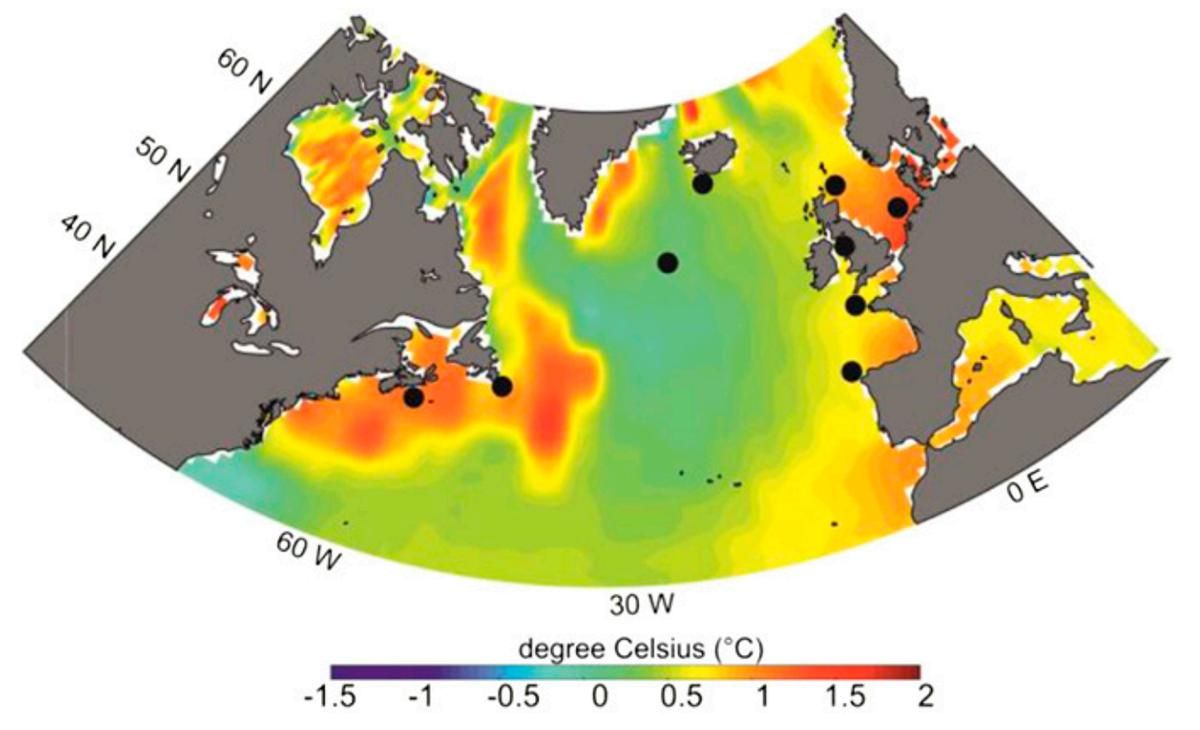 Change in North Atlantic sea surface temperatures, calculated as the difference between the averages over the years 1890-1958 and 2000-11. Red and orange shading indicate areas of particular warming. The black dots show the Vibrio sampling areas.Vezzulli et al. (2016)

Marine Bacteria in a Time of Climate Change

As the North Atlantic has warmed and concentrations of Vibrio bacteria have increased, the number of Vibrio infection cases in northern Europe and the U.S. Atlantic coast have also risen, the paper says.

There could be several reasons for this, the researchers note, such as people being more likely to go out swimming in warm conditions. But the data suggest that the number and spread of Vibrio bacteria in the water is a strong factor.

This means the rising SSTs could be leading to more Vibrio infections in humans, the paper says:

“The evidence is strong that ongoing climate change is influencing outbreaks of Vibrio infections on a worldwide scale.”

Therefore, the continued rise in global SSTs in future years may exacerbate the growth and spread of Vibrio bacteria, the researchers conclude.

The study is a “stunning collaboration that integrates major disciplines, including climate, oceanography, microbiology and public health,” said Prof. Drew Harvell, a professor in the department of ecology and evolutionary biology at Cornell University, who wasn’t involved in the study. She tells Carbon Brief:

“The implications of these finding are that warming events will increase risk to human health from ocean-based Vibrio bacteria.”

Another conclusion from the study is that better monitoring for Vibrio infections may be necessary, Vezzulli said:

“This is particularly true for Northern Europe where, despite the substantial increased in the number of Vibrio infections—including many fatalities—in recent years, vibrosis [except cholera] are not notifiable diseases.”

This means that doctors and hospitals in European countries are not currently required to inform their government when they treat someone with a Vibrio infection. More comprehensive data collection on Vibrio cases would help scientists keep tabs on how these diseases are being affected by climate change, Vezzulli concludes.

This article was reposted with permission from our media associate Carbon Brief.