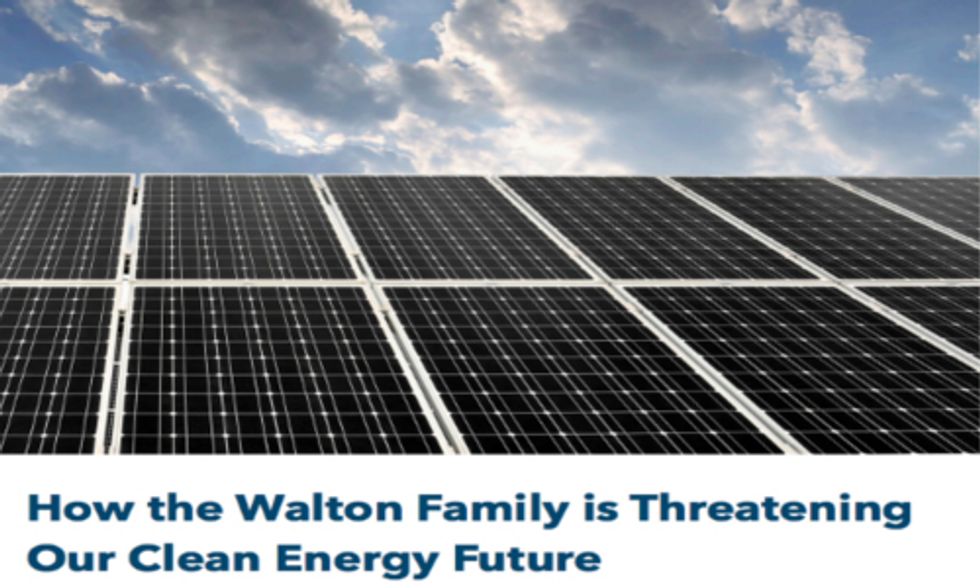 Although Walmart has installed more solar power capacity than any other U.S. company, its owners, the Walton family, have invested millions in groups that are fighting to limit the development of solar power, according to a new report from the nonprofit Institute for Local Self-Reliance (ILSR).

The Waltons claim to have a deep commitment to sustainability, but their support for anti-solar initiatives tells a different story. Photo credit: Institute for Local Self-Reliance

The report, How The Walton Family Is Threatening Our Clean Energy Future, resolves the contradiction by pointing to the multibillionaires' main motivation: profit.

According to the report, "The Walton family—majority owners of Walmart—are impeding America’s transition to a clean energy future. At a time when more than 500,000 households and businesses are generating their own solar electricity, and the U.S. solar industry is employing 143,000 people, the Waltons are funding nearly two dozen organizations working to roll back renewable energy policies, while a Walton-owned company is pushing for regulations aimed at hindering the growth of rooftop solar power."

As solar energy generation has spread across the country, traditional fossil fuel-based utilities have been campaigning to weaken state policies that encourage the growth of clean energy, including solar. They've especially taken aim at anything that would bolster the spread of rooftop solar installations, which threatens their profits. They've been backed by anti-environment groups like the American Legislative Exchange Council (ALEC), Americans for Prosperity and American Enterprise Institute. The Waltons have donated more than $4.5 million to more than 20 such groups, including all three of those. The study also found that the bulk of Walmart's and the Waltons' contributions to individual politicians favor those who oppose legislation reducing energy pollution to address climate change.

ALEC's list of sponsors for its 2011 annual meeting shows The Walton Family Foundation as a Chairman level sponsor, an estimated donation of $50,000, the sponsorship cost for that level in 2010.

The anti-renewables groups have had some successes in rolling back the energy future in Ohio and Arizona. Arizona, for instance, gave the state's largest utility, APS, the right to charge a fee to homes with rooftop solar. Since then, according to the ILSO study, rooftop solar installations are declining, and so is the number of jobs in the solar industry.

What's Walmart's dog in this fight? Let the report explain:

"A Walton-owned solar company, First Solar, was instrumental in helping APS win in Arizona, backing the utility even as the rest of the solar industry joined environmental and consumer groups in opposing the new fees. First Solar builds solar arrays for utilities and, as such, stands to benefit if households are blocked from generating their own electricity, even if it means slowing the overall growth of solar."

First Solar instigated a proceeding at the World Health Organization that could force several states to repeal solar incentives that encourage job creation there. First Solar does most of its manufacturing in Malaysia, minimizing its contribution to U.S. job creation.

The report tears the veil off the corporate sleight of hand known as "greenwashing," where a company publicly touts its environmentally friendly initiatives while acting against environmental interests behind the scenes.

“The Waltons claim to have a deep commitment to sustainability, but their support for anti-solar initiatives tells a different story," said Stacy Mitchell, a senior researcher at ILSR and author of the new report. "The Waltons are investing in efforts that both undercut clean energy and prevent average Americans from benefitting economically from solar power."

In addition to highlighting the extent of the Waltons' campaign against rooftop and small solar installations to protect their own investment in utility-scale arrays, ISLR found that since Walmart began its environmental public relations campaign in 2005, its self-reported greenhouse gas emissions have grown 14 percent. The company pledged to go 100 percent renewable but it's going in the wrong direction. The share of its energy generated by wind and solar has actually dropped and now stands at three percent.

"Rooftop solar offers an enormous opportunity to accelerate the transition to renewable power, broaden the ownership of electricity generation and create tens of thousands of good jobs," says the report. "We can't let the Waltons snatch that future from us."