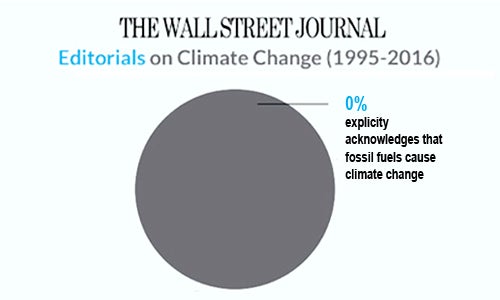 The Wall Street Journal’s opinion page is perhaps the most influential outlet for climate denial and rarely gives its readers accurate information about how fossil fuels cause global warming. 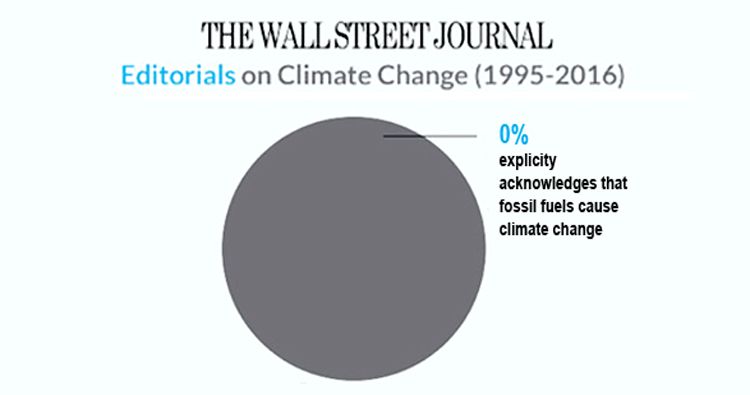 The WSJ has written 201 editorials on climate change since 1997. Exactly zero acknowledge the cause.

A new ad campaign from The Partnership for Responsible Growth seeks to fix that, giving readers real facts on climate change and driving them to pricecarbon.org to learn about solutions. Yesterday, they kicked off the campaign with a quarter-page ad in the Journal’s opinion section featuring the headline: “Exxon’s CEO says fossil fuels are raising temperatures and sea levels. Why won’t the Wall Street Journal?” (Good question!)

The Washington Post has the ad for you to see, as well as the inside scoop, revealing tidbits such as how the paper charged nearly $10,000 more for the first ad that calls out the Wall Street Journal than it did for the next dozen that don’t explicitly reference the paper. (The Wall Street Journal disputes that claim, responding that the first ad is simply full price while the rest are discounted … )

The Washington Post story also points to a white paper that underpins the claims in the ad that the Wall Street Journal’s editorial board has never acknowledged the reality of climate change. Turns out that in at least 201 editorials going back to 1997, not once has the editorial board explicitly admitted fossil fuels cause climate change. And not only are pieces usually scientifically inaccurate, the Wall Street Journal also routinely fails to disclose to readers that op-ed authors work for fossil-fuel funded think tanks. So not only are there errors, but given the funding bias of authors, those frequent errors might not be accidents …

The white paper is an analysis of more than 600 pieces of content on the Wall Street Journal’s opinion page, each judged according to whether or not it provides the reader with mainstream climate science or fringe denial. Out of the 602 editorials, columns and op-eds, only 44 reflect the consensus or call for climate action. So while 97 percent of climate scientists agree fossil fuels cause climate change, readers of the Journal’s opinion page get the opposite impression as 93 percent of its content runs counter to the consensus.

So while it’s no surprise that the Wall Street Journal’s opinion page is a hotbed of climate inaccuracies, this sort of quantification lays bare their pro-pollution bias.

But the ads also show the Journal is willing to print the truth about climate change … So long as you pay them something like $30,000.