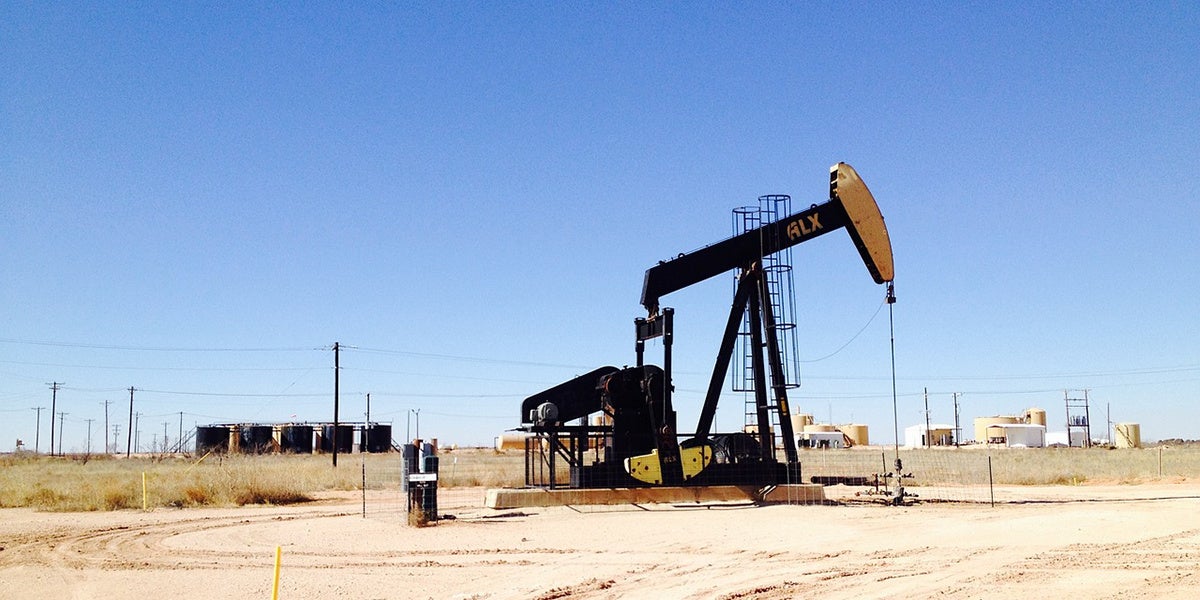 The U.S. shale oil industry hailed as a “revolution” has burned through a quarter trillion dollars more than it has brought in over the last decade. It has been a money-losing endeavor of epic proportions.

In September 2016, the financial ratings service Moody’s released a report on U.S. oil companies, many of which were hurting from the massive drop in oil prices. Moody’s found that “the financial toll from the oil bust can only be described as catastrophic,” particularly for small companies that took on huge debt to finance fracking shale formations when oil prices were high.

And even though shale companies still aren’t turning a profit, Wall Street continues to lend the industry more money while touting these companies as good investments. Why would investors do that?

David Einhorn, star hedge fund investor and the founder of Greenlight Capital, has referred to the shale industry as “a joke.”

“A business that burns cash and doesn’t grow isn’t worth anything,” said Einhorn, who often goes against the grain in the financial world.

Aren’t investors supposed to be focused on putting money toward profitable companies? While, in theory, yes, the reality is quite different for industries like shale oil and housing.

If the U.S. financial crisis of 2008 has revealed anything, it is that Wall Street isn’t concerned with making a “shitty deal” when it means profits and bonuses for its traders and executives, despite their roles in the crash.

Wall Street makes money by facilitating deals much like a Vegas bookie makes money by taking bets. As the saying about Las Vegas goes: “The house always wins.” What’s true about casinos and gambling also holds true for Wall Street.

Wall Street caused the 2008 financial crisis, with some of its architects personally benefiting. However, while a few executives profited, the result was a drop in employment of 8.8 million people, and according to Bloomberg News in 2010, “at one point last year [2009] the U.S. had lent, spent or guaranteed as much as $12.8 trillion to rescue the economy.”

JP Morgan (along with much of Wall Street) required large sums of money in the form of bailouts to survive the fallout from all of the bad loans made, which brought about the housing crisis. Is JP Morgan steering clear of making loans to the shale industry? No. Quite the opposite.

As shown in this chart of which banks are loaning money to shale company EOGResources, while all of the big players in Wall Street are in on the action, JP Morgan has the biggest bet. 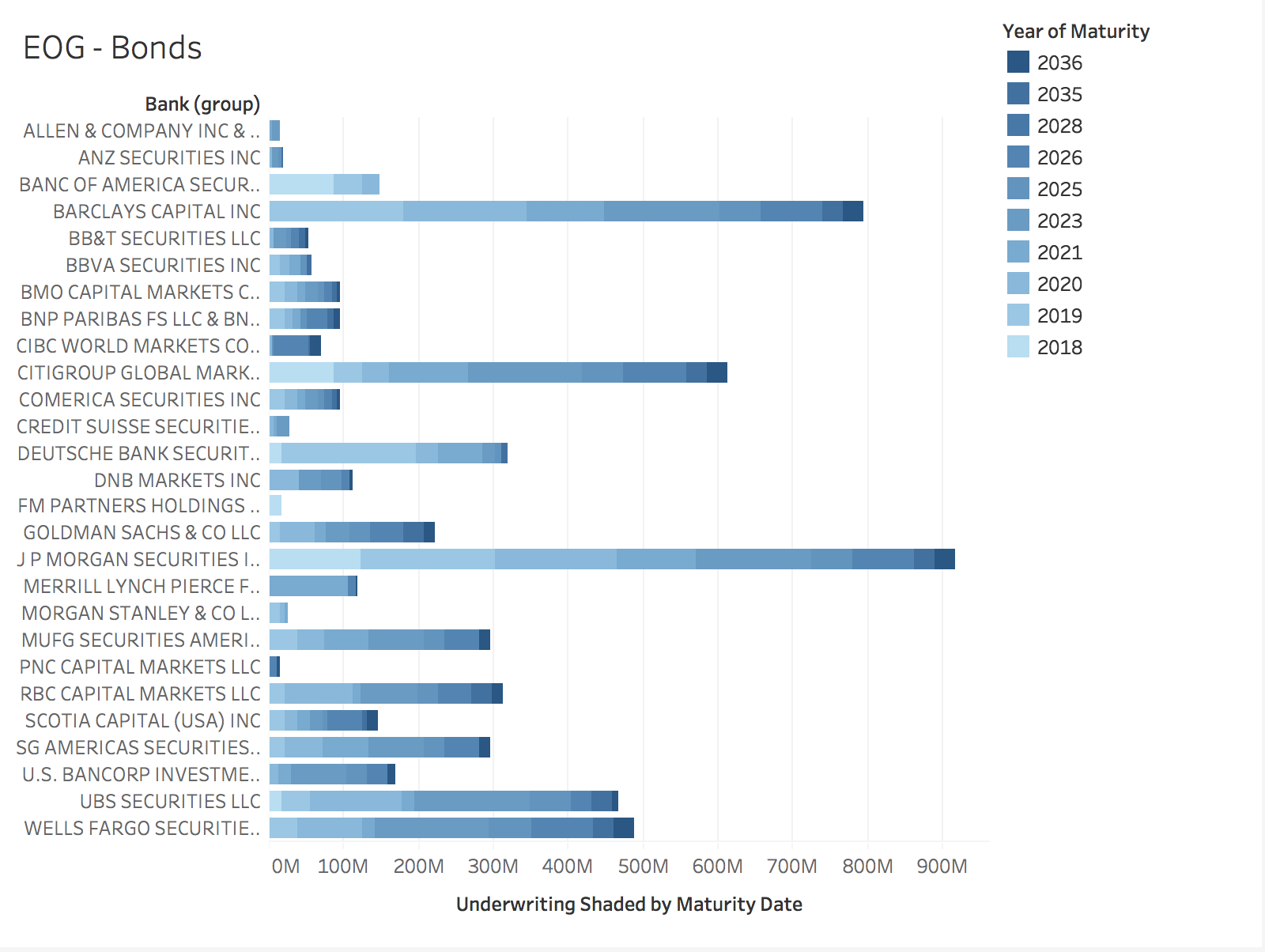 To understand why JP Morgan and the rest of these banks would loan money to shale companies that continue to lose it, it’s important to understand the gambling concept of “the vigorish” or the vig. Merriam-Webster defines vigorish as “a charge taken (as by a bookie or a gambling house) on bets.”

Wall Street makes money by taking a cut of other people’s money. To a gambling house, it doesn’t matter if everyone else is making money or losing it, as long as the house gets its cut (the vig)—or as it’s known in the financial world—fees.

Trent Stedman of the investment firm Columbia Pacific Advisors LLC explained to The Wall Street Journal at the end of 2017 why shale producers would keep drilling more oil even when the companies are bleeding money on every barrel produced:

“Some would say, ‘We know it’s bad economics, but it’s what The Street wants.'”

And “The Street” generally gets what it wants, even when it is clear that loaning money to shale companies that have been losing money for a decade and are already deep in debt is “bad economics.” But Wall Street bonuses are based on how many “fees” an employee can bring to the bank. More fees mean a bigger bonus. And loans—even ones that are clearly bad economics—mean a lot more fees.

Shale Oil Companies Are “Creatures of the Capital Markets”

In 2017 “legendary” hedge fund manager Jim Chanos referred to shale oil companies as “creatures of the capital markets,” meaning that without Wall Street money, they would not exist. Chanos is also on record as shorting the stock of heavily leveraged shale oil giant Continental Resources because the company can’t even make enough money to pay the interest on its loans.

And he has a point. In 2017 Continental spent $294.5 million on interest expenses, which is approximately 155 percent of its 2017 adjusted net income generation. When you can’t even pay the interest on your credit cards, you are broke.

And yet in 2017, investor capital was still flowing, with Continental Resources among those bellying up to the Wall Street trough for another billion in debt.

“In 2017, U.S. [exploration and production] firms raised more from bond sales than in any year since the price collapse started in 2014, with offerings coming in at around $60 billion — up nearly 30 percent from 2016, according to Dealogic. Large-cap players like Whiting Petroleum, Continental Resources, Southwestern, Noble, Concho and Endeavor Energy Resources each raised $1 billion or more in the second half of 2017.”

How big of a problem is this business of loaning money to an industry burning through billions and burying itself in debt? So big that the CEO of shale company Anadarko Petroleum is blaming Wall Street and asking its companies to please stop loaning money to the shale oil industry. Yes, that’s right.

In 2017, Anadarko CEO Al Walker told an investor conference that Wall Street investors were the problem:

“The biggest problem our industry faces today is you guys. You guys can help us help ourselves. It’s kind of like going to AA. You know, we need a partner. We really need the investment community to show discipline.”

The Wall Street Journal reported that Walker maintains: “Wall Street has become an enabler that pushes companies to grow production at any cost, while punishing those that try to live within their means.”

Imagine begging banks to stop loaning you money. And being ignored.

Growing production at any cost is the story of the shale “revolution.” The financial cost paid so far has been the more than $280 billion the industry has burned through—money that its companies have received from Wall Street and, despite the plea from Al Walker, continue to receive.

The Economist summarized the situation in 2017:

“It [the shale industry] has burned up cash whether the oil price was at $100, as in 2014, or at about $50, as it was during the past three months. The biggest 60 firms in aggregate have used up $9 billion per quarter on average for the past five years.”

Higher oil prices are now being touted as the industry’s savior but, as The Economist noted, the shale industry was losing money even when oil was $100 a barrel.

Still Wall Street keeps giving the shale industry money and the shale industry keeps losing it as it ramps up production. To be clear, this arrangement makes shale company CEOs and financial lenders very rich, which is why the trend is likely to continue. And why Continental Resources CEO Harold Hamm will continue to repeat the myth that his industry is making money, as he did at the end of 2017:

“For anybody to even put forth the suggestion we haven’t had great expansion and wealth creation in this industry with horizontal drilling and all the technology that’s come about the last 10 years, I mean, it’s totally ridiculous.”

No one will argue that Hamm and his partners on Wall Street are not extremely wealthy. That has happened despite Hamm’s company and the rest of the fracking industry losing epic sums of money. The same year Hamm made that statement, his company couldn’t even cover its interest expenses. To put that in perspective, Continental Resources couldn’t even make the equivalent of the minimum payment on its credit card.

Watch What the Industry Does, Not What It Says

As reported on DeSmog, the industry certainly got a huge boost from the recent tax law, which will help its companies’ short-term finances. Continental Resources alone took home $700 million in tax relief.

Recent reports in the financial press detail how the new approach in the shale industry will be to focus only on profitable oil production, not just producing more barrels at a loss. As The Wall Street Journal put it in a headline: Wall Street Tells Frackers to Stop Counting Barrels, Start Making Profits.

In that very article, Continental CEO Hamm assures that he is on board with this new approach, saying, “You are really preaching to the choir.”

But has Continental actually embraced this new approach of fiscal responsibility and restraint?

The fracking firm appears to have done the opposite, increasing production to record levels along with the rest of the shale industry. Continental recently reported plans to drill 350 new wells at an estimated cost of $11.7 million per well, which adds up to over $4 billion in total costs on those wells. The company currently holds more than $6 billion in debt and less than $100 million cash.

Why would Hamm say one thing and do another? Well, he personally has accrued billions of dollars while his company has burned through billions.

Despite leading Continental to another money-losing year in 2017, Hamm took home a fat raise.

Correction: This article initially estimated the cost for 350 new wells at $400 million. The correct number is $4 billion.