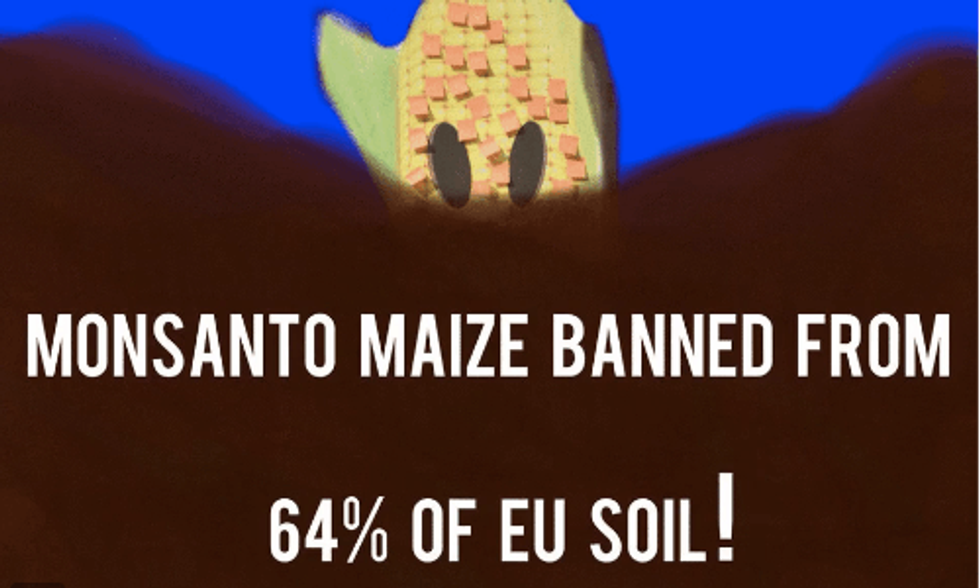 Like falling dominoes, more and more European Union countries have decided to stamp out the growth of genetically modified (GMO) crops within their borders.

According to Greenpeace, as the Oct. 3 deadline to notify the European Commission approaches, at least 14 European Union countries and three regions—which represent 65 percent of the EU’s population and 66 percent of its arable land—are in the process of banning the cultivation of GMO crops in its territories.

As of today, Austria, Croatia, France, Greece, Hungary, Latvia, Lithuania, the Netherlands and Poland as well as one regional administration (Wallonia, in Belgium) have formally notified the commission of their intention to ban GMO crop cultivation, Greenpeace said.

There are impending notifications from Bulgaria, Denmark, Germany, Italy and Slovenia, as well as and three regional administrations—Scotland, Wales and Northern Ireland in the UK, Greenpeace noted.

These governments have chosen the “opt-out” clause of a European Commission rule passed in March that allows its 28-member bloc to abstain from growing GMO crops, even if they are already authorized to be grown within the union. Wales and Bulgaria were the most recent to join the growing ranks.

This wave of GMO-bans across Europe signify a distrust of EU GMO crop approvals, Greenpeace noted.

“At least half of the EU’s governments are rejecting the commission’s drive for GMO crop approvals. They don’t trust EU safety assessments and are rightly taking action to protect their agriculture and food." Greenpeace EU food policy director Franziska Achterberg explained in a statement.

"The only way to restore trust in the EU system now is for the commission to hit the pause button on GMO crop approvals and to urgently reform safety testing and the approval system,” Achterberg concluded.

Many of these countries already have stringent laws against GMOs out of public health and environmental concerns. All 28 nations in the EU require GMO labeling, for instance.

After Scotland decided to take the opt-out (the first in Europe to do so), Scotland's Rural Affairs Secretary Richard Lochhead spoke about the state of Europe's GMO-distrust.

“The Scottish Government has long-standing concerns about GMO crops—concerns that are shared by other European countries and consumers, and which should not be dismissed lightly,” he said in a statement.

In another example, France is already strongly against GMOs and prohibits the cultivation of any variety of genetically modified maize. When France (which happens to be Europe's largest grain grower and exporter) announced it was also opting out of GMO cultivation, the mostly symbolic move appeared to be singling out Monsanto’s MON 810 maize, the only GMO crop grown in Europe, and is currently under review at the European level.

Monsanto has faced a spate of bad press in recent months. Six months ago, the World Health Organization's cancer arm famously classified that the chemical glyphosate in Monsanto's flagship herbicide, Roundup, was a possible carcinogen. In recent news, the company was also slapped with two lawsuits, with the plaintiffs both claiming that the weedkiller caused their cancers.

Monsanto maintains the safety of its products and has also spoken out on the anti-GMO EU wave. After Latvia and Greece requested to not grow GMO-crops earlier this month, the biotech giant told Reuters that the two countries were ignoring science and refusing GMOs out of “arbitrary political grounds.”

In a statement, Monsanto said that the move from the two countries “contradicts and undermines the scientific consensus on the safety of MON810.”

Greenpeace said in its press release that it expects several more EU countries to follow in the GMO-ban wave as the deadline approaches.

Although it is not a part of the EU, Russia, as we previously covered, decided to stamp out any GMOs in its entire food production.