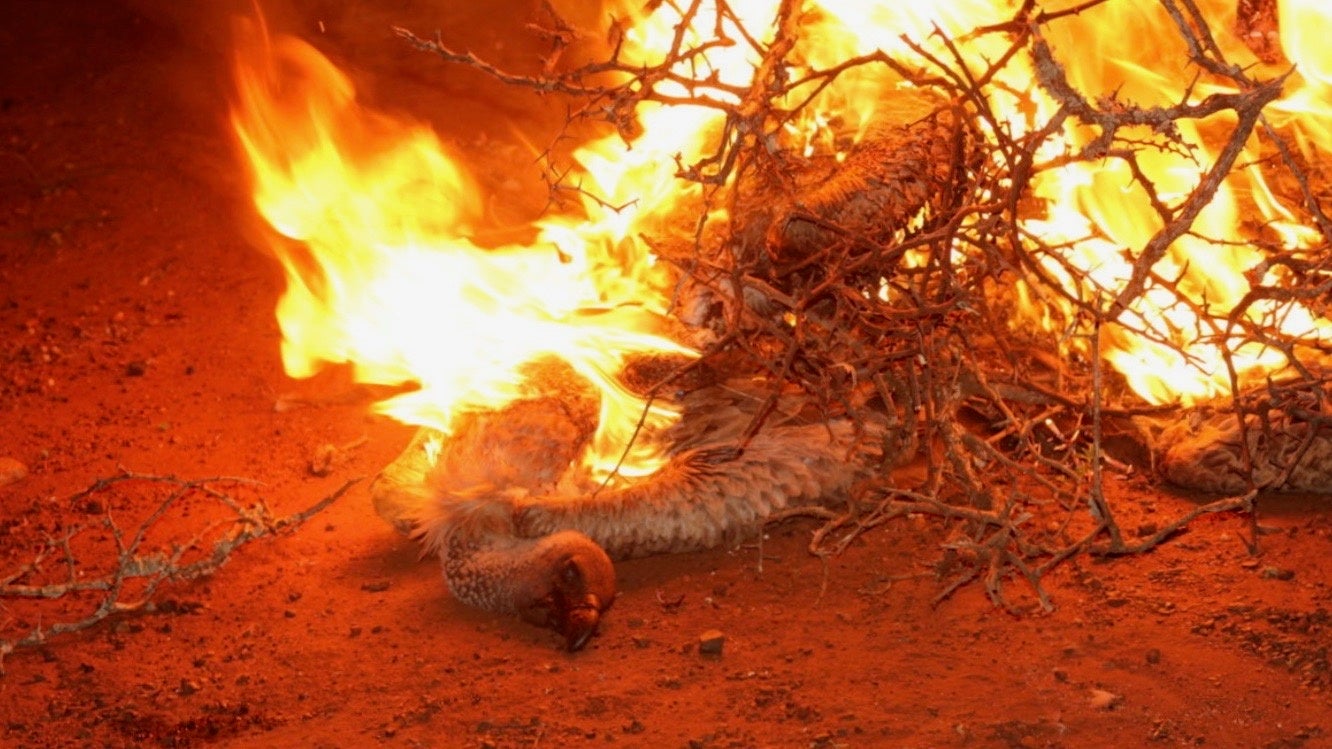 Another mass vulture poisoning incident has ended the year on a sour note for Wildlife ACT rangers in the South African province of KwaZulu-Natal.

Soon after releasing two rehabilitated vultures, rescued from a different poisoning scene earlier this year, WildLife ACT was alerted to another incident on Dec. 23, on Rolling Valley Ranch, located between Pongola and Mkuze in the far north of the province.

“Arriving at a scene like this with everything so fresh, but too late to assist in saving any poisoned birds is heartbreaking. Losing one vulture is always a tragedy. Losing at least 16 birds at one feeding is a crisis,” said PJ Roberts, manager of Wildlife ACT’s Emergency Response Team.

The first bird found, a white-backed vulture (Gyps africanus), hinted at Roberts’s worst fears: “It had a full crop (still containing undigested food), contorted feet and many dead flies were scattered around its remains — all clear signs of fast-acting poison.”

The team swept the area, but it took an aerial search to locate more victims. “We landed to find the devastating remains of multiple birds hidden at the base of the tree. Included in this discovery was the removed, yellow, wing tags of H065; a young lappet-faced vulture (Torgos tracheliotos) tagged in Hluhluwe-iMfolozi Park in October 2017 as a fledgling,” said Roberts.

“No more than 30m away, the morbid discovery of 13 processed and harvested white-backed vultures, with their heads and feet removed, were found very purposefully hidden in a thick bush,” added Roberts. 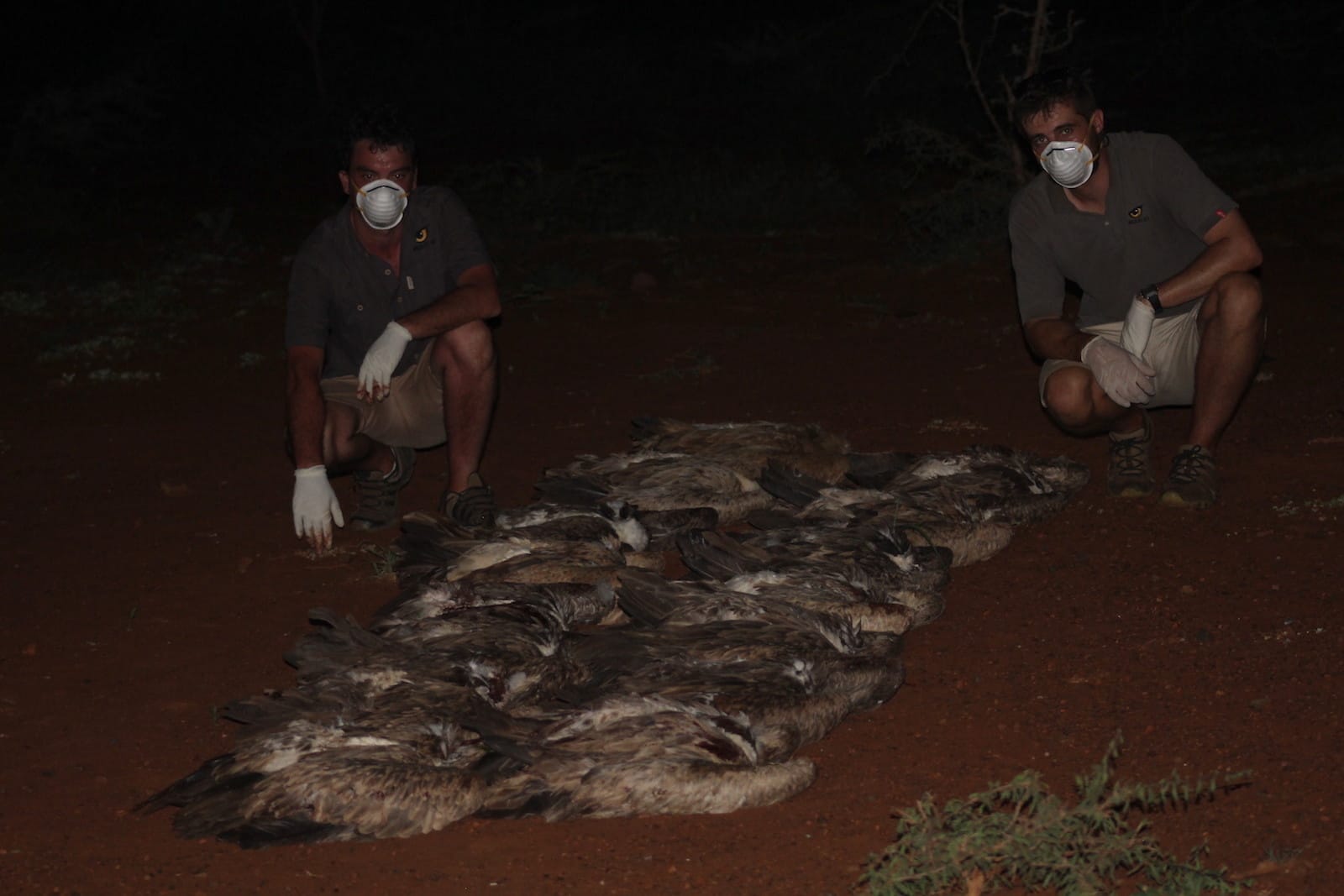 Nearby was the body of an impala — snared, killed, and laced with poison. The rangers burned all the contaminated carcasses to ash to remove the poison from the ecosystem.

It is the fourth vulture poisoning incident in northern Zululand this year, bringing the total recorded number of vultures harvested for body parts in this region alone to 53. The actual number of birds killed is believed to be much higher as many incidents are never detected.

The Endangered WildLife Trust’s (EWT) Vultures for Africa Programme manager, Andre Botha, said it was difficult to quantify how many vultures are deliberately poisoned for body parts.

According to records kept by EWT, more than 1,200 vultures have been deliberately poisoned in Southern and Eastern Africa this year. Culprits include poachers who poison the carcasses of elephant and other game in an apparent effort to conceal illegal activities from rangers. These poisonings are referred to as “sentinel poisonings”, as vultures circling over poached animals alert rangers to the killings.

Africa’s vulture populations have already declined by an average 62 percent over the past three decades — with seven species crashing by 80 percent. Experts recently warned that the continent’s vulture populations face the prospect of collapsing, in much the same way as vulture species did in Asia thirty years ago.

In the early 1990s, millions of Asian vultures died after eating the remains of cows in carcass dumps; India has 500 million cows raised for milk, but not eaten by the majority Hindu population. Scientists identified the culprit: diclofenac, an anti-inflammatory used by vets. Vultures feeding on carcasses containing the drug died swiftly of kidney failure.

The reasons for the African vulture crisis are vastly different. They include habitat loss, ingestion of lead ammunition, collisions with power lines, accidental drownings in farm water reservoirs, and the use of poisoned bait by livestock owners to kill predators like jackals. Vultures feeding off the carcasses subsequently die, often in significant numbers.

But many more are poisoned deliberately to harvest body parts for belief-based use.

“The vultures are killed for their heads and feet and other parts,” said Chris Kelly, a species director at Wildlife ACT. “This is definitely the single biggest threat to diminishing vulture populations in this province,” said Kelly.

In many parts of Africa, vultures are believed to have psychic powers, including an ability to see into the future.

According to a fact sheet from EWT, the brains of the bird are dried, rolled and smoked as joints or simply burnt and the fumes inhaled. Users believe this improves their odds when they gamble on the lottery or place bets on sport. Students take it when preparing for exams. Other reported uses of vultures include consuming their eyes to improve eyesight, their beaks for protection, or their feet to heal fractured bones or make a person run faster.

In 2014, EWT estimated that 130,000 traders, hunters and traditional healers were operating in South Africa. This figure is believed to have increased, sparking calls from conservationists, environmental scientists and wildlife experts at this year’s Conservation Symposium for an awareness-building campaign to reduce this consumption and demand for vulture parts. 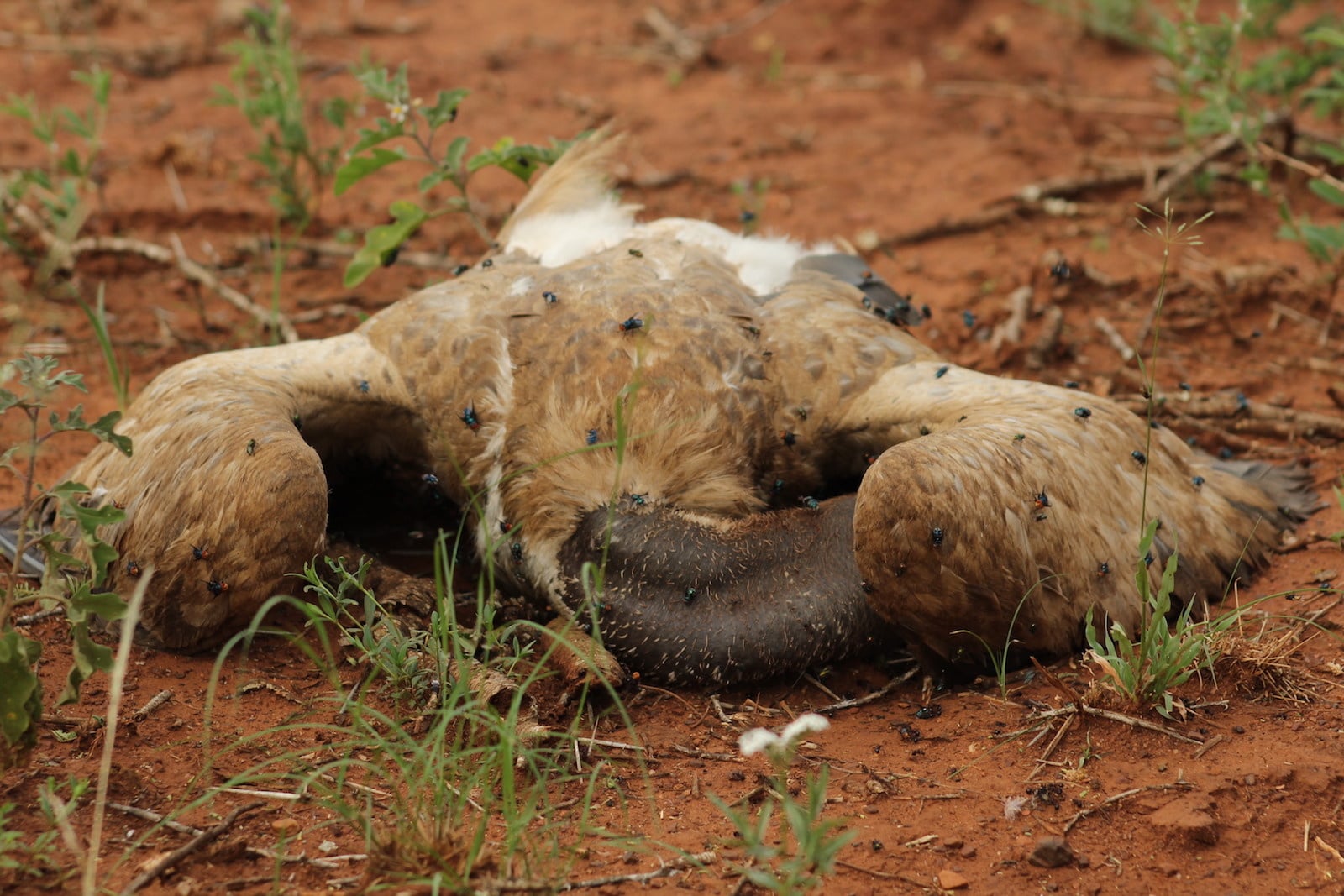 Poisoned vulture: more than 1,200 vultures have been deliberately poisoned in Southern and Eastern Africa in 2019. Wildlife ACT / Mongabay

“Vultures provide critically important ecosystem services by cleaning up carcasses thus reducing the spread of dangerous diseases such as anthrax and rabies and resulting in highly significant economic and human health benefits,” said Brent Coverdale, an animal scientist for Ezemvelo KZN Wildlife at the symposium. “We really can’t afford to lose them.”

As vultures are protected by law, it is illegal to possess or kill any of the six vulture species found in South Africa. Nevertheless, deliberate killings continue.

Roberts said the latest poisoning incident had been reported to local police.

“We are hoping this leads to an arrest,” said Roberts. “If the illegal harvest of these birds is not halted, then extinction may be just around the corner and the services that they provide within the ecosystem will be lost forever.”

Fred Kockott is the founding director of Roving Reporters, a journalism training agency that focuses on environmental, social and justice issues.