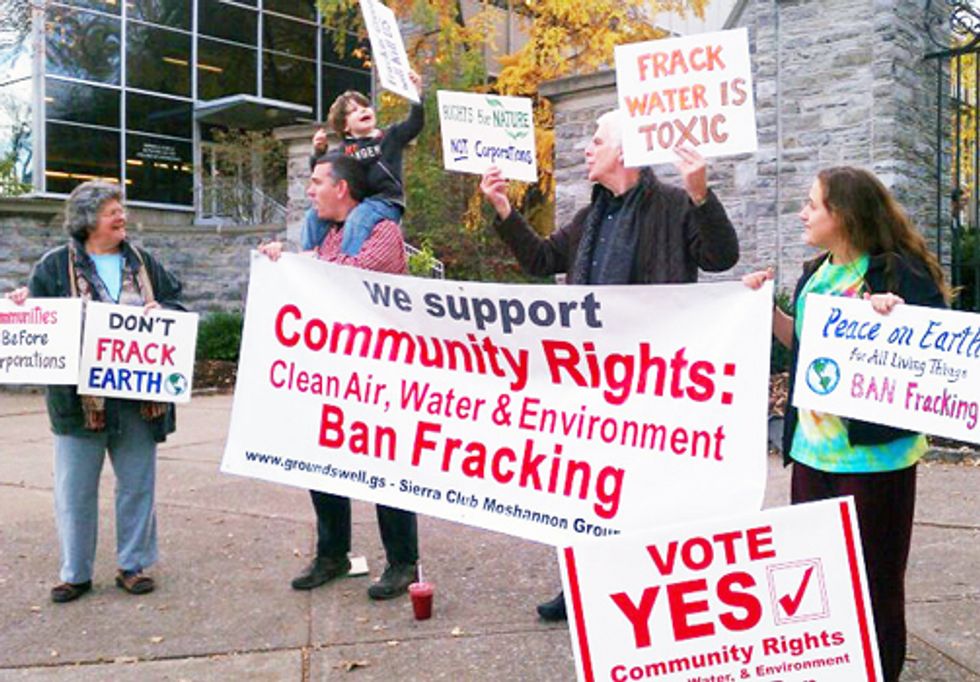 Voters in Ferguson Township, Centre County Pennsylvania adopted a Community Bill of Rights guaranteeing the right to clean air, pure water, a sustainable energy future, the peaceful enjoyment of home, the right of ecosystems to exist and flourish, and the right to exercise self-government in the local community. To protect these rights, the amendment also bans corporations from conducting shale gas drilling and related activities in the community.

When Kurland presented the petitions to the Centre County Board of Elections for inclusion on the ballot, Ferguson Township officials threatened to file an injunction in county court, seeking a ruling on the question’s constitutionality. CELDF, representing the petitioners, notified the Township that in similar cases it had argued, the courts had ruled in favor of petitioners’ rights against prior restraint. Following receipt of that information, Solicitor Lewis Steinberg advised the Township Commissioners that residents must first have their say at the polls.

The amendment survived pre-election public opposition by the Township Commissioners, Municipal Solicitor Lewis Steinberg and Township Manager Mark Kunkle, including Township-funded mailers sent to each household in the community and commentaries on the Township’s official website advising residents to vote against the Community Bill of Rights.

Despite claims made by opponents, the Community Bill of Rights amendment does not “regulate” oil or gas extraction. Rather, it asserts fundamental rights that are beyond regulation by the state and then protects those rights by prohibiting corporate behavior deemed by the community to pose threats to those rights. Fracking and related activities are permitted by the state and allow corporations to site drilling and injection wells against the consent of the community. The amendment recognizes the rights of community members as superior to the regulatory laws of Pennsylvania and finds the issuance of such permits, in violation of those rights, to be an illegitimate exercise of state power.

With passage of the law, Ferguson Township joins a dozen other communities in Pennsylvania, Maryland, New York, Ohio and New Mexico that have taken a stand for fundamental rights by banning fracking and related activities.

Corporations that violate the prohibitions or that seek to drill or site injection wells in the Township will not be afforded “personhood” rights under the U.S. or Pennsylvania Constitution, nor will they be afforded protections under the Commerce Clause or Contracts Clause under the federal or state constitution.