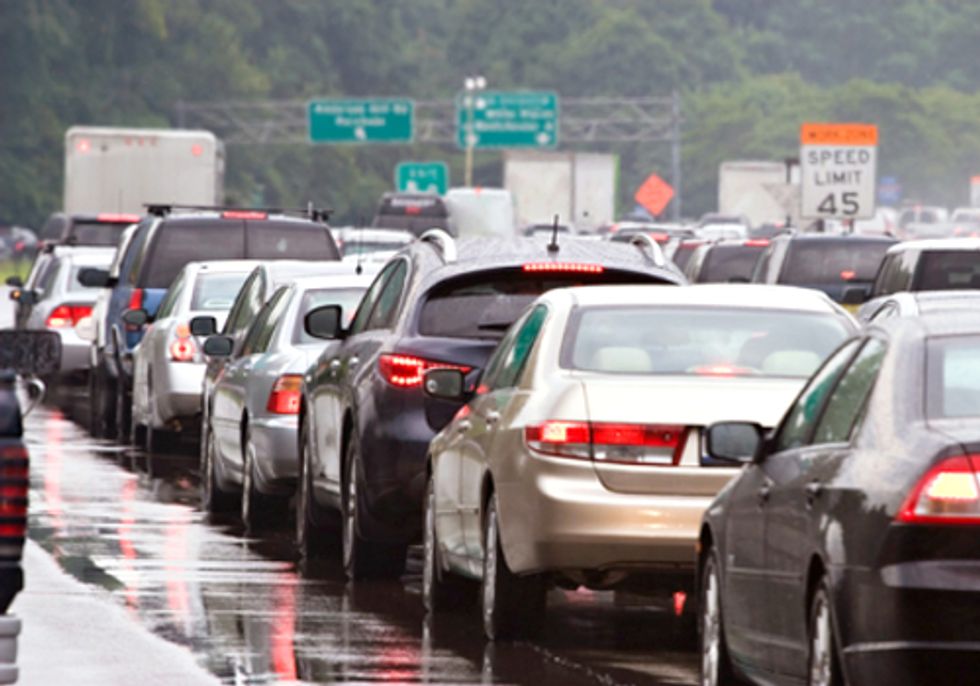 Next time you find yourself in traffic, try this nifty thought exercise. Ignore the cars within your field of vision and imagine instead the contents of their fuel tanks. Visualize gasoline flowing up and down the highway.

Let’s assume the typical American car carries seven gallons of refined petroleum product in its tank at any given moment (a 15-gallon tank half-full). That’s a lot of liquid to be carting around. In fact, gasoline is the second-most-consumed fluid in the U.S. after water. Each American household consumes an average of 350 gallons of water per day and 2.5 gallons of gasoline; milk, coffee and beer clock in at .15 gallons, .12 gallons, and .1 gallons respectively.

If you do this visualization exercise, you might find yourself seeing rivulets, streams, and—in the case of big freeways—rivers of gasoline coursing across the land. For the U.S. as a whole, 400 million gallons of gasoline enter the flow every day. But, since we routinely carry more gasoline with us than we intend to use immediately, the total amount in car gas tanks at any given moment is roughly seven times larger, so that America’s gasoline rivers slosh with 2.8 billion gallons on any given day.

A real river or stream is the spine of a watershed and the heart of a riparian ecosystem. Trees, shrubs, insects and their larvae, fish, birds, amphibians and mammals all derive their livelihoods from flowing water.

A river of gasoline is sterile by comparison, even though petroleum itself is composed of some of the same main elements as living things—carbon and hydrogen. Oil is a fossil fuel, after all, made of heaps and heaps of dead algae compressed and heated over millions of years so that carbohydrates became hydrocarbons. Gasoline rivers are no place for non-human life forms: only the most daring of weeds and foolhardy of animals venture there, with the latter often ending up as road kill. Indeed, highways could be thought of as rivers of death.

Water makes itself seen and felt as it falls from the sky and collects in puddles, ponds, lakes and oceans. The tiny fraction of Earth’s water that enters municipal delivery systems temporarily disappears into a maze of pipes but soon re-emerges at the ends of faucets and showerheads.

Gasoline is covert and furtive by comparison. Oil emerges from wells and, via pipelines, enters refineries; from these, gasoline gushes through more pipes that carry it to regional distribution centers, whence it is delivered by tanker truck to filling stations. We travel to those stations to dispense gas by hose into the tanks of our cars; from those tanks it is delivered to its final moment of combustion within the engine. At no point along its path is oil or gasoline customarily exposed to public view.

What we see instead, for the most part, is the automobile—a painstakingly crafted exoskeleton that carries gasoline and humans from place to place—and a landscape substantially altered to suit automobiles. We obsess over our cars: they are our symbols of freedom and status. We judge them by the elegance of their design, their top speed and their acceleration. We revere their brand names—Mercedes, Ferrari, Jaguar, Bentley, Cadillac, Lexus. We take for granted the gasoline that makes them go, until a gauge or warning light on the dashboard forces us to pull over and buy more. Yet without gas there would be no point to the automobile; even the brawniest Porsche could do no more than ornament a driveway.

We complain about the price of gasoline, yet at four dollars per gallon it is cheaper than coffee, beer, or milk—cheaper even than most bottled water.

Unlike those other liquids, gasoline is explosive. It literally gives us a bang—and a fairly big bang, at that. Visualize slowly pushing your car miles at a time, your leg and arm muscles straining to move a ton or two of metal, and you may gain some appreciation for how much power is being released by each drop of the gasoline that speeds our cars down the road with virtually no effort required on our part.

Visualize gasoline-powered civilization arising as if by some maniacally accelerated evolutionary process. It all began so recently, in the mid-nineteenth century, and spread across the globe in mere decades. Automobiles mutated and competed for dominance on vast networks of roads built to accommodate them. Shopping malls and parking garages sprang up to attract and hold them. And powering it all was an ever-widening but mostly invisible river of gasoline—the poisonous blood of 700 million dinosaur-like machines that now dot landscapes around the world.

Visualize gasoline’s combustion by-products spewing out of millions of tailpipes and into the air breathed by children. As we pump oil out of the ground we transfer ancient carbon from the Earth’s crust into the atmosphere at a rate of 5.2 metric tons per car per year. A car that gets 25 miles per gallon of gasoline spews 47 gallons of CO2 per mile (at standard temperature and pressure). Like gasoline, carbon dioxide is invisible most of the time; you have to use your powers of visualization to see the thickening blanket of CO2 that traps more and more of Earth’s heat.

Visualize ancient subterranean oil reservoirs rapidly depleting, with half of Earth’s entire inheritance of conventional crude converted to CO2 and water during the lifetime of an average baby boomer (1950-2025). Already, nations are straining to adjust to declining oil abundance, searching for alternatives, and fighting over what’s left. No, we’re not running out of oil. We’ve only begun tapping tar sands, tight oil, and polar oil. But what’s left, though impressive in quantity, will be expensive, risky and slow to extract.

Visualize a time, years or decades from now, when machines designed to burn gasoline sit idle, rusting, and abandoned. No, we won’t quickly and easily switch to electric cars. In order for that to happen, the economy would have to keep growing, so that more and more people could afford to buy new (and more expensive) automobiles. A more likely scenario: as fuel gets increasingly expensive the economy will falter, rendering the transition to electric cars too little, too late.

Visualize life without gasoline. You might as well start doing so now, at least in imagination; soon enough, this will no longer be an exercise. Already prices are high and volatile. Next we’ll see international conflicts that shut down big portions of the global oil trade for weeks or months at a time. Strategic reserves will be tapped. The government will commandeer supplies for the military and police. One way or another, you’ll be using much less gasoline than you do today. How will your food be grown and transported? How will you get around? Will your job still exist? How will your community function?

Visualizing gasoline won’t make more of it magically appear. But understanding the extent of our dependence on it helps us address our vulnerability to the inevitable process of depletion. Imagining a world without gasoline could be a useful first step in preparing for a future that’s coming at us whether we’re ready or not.