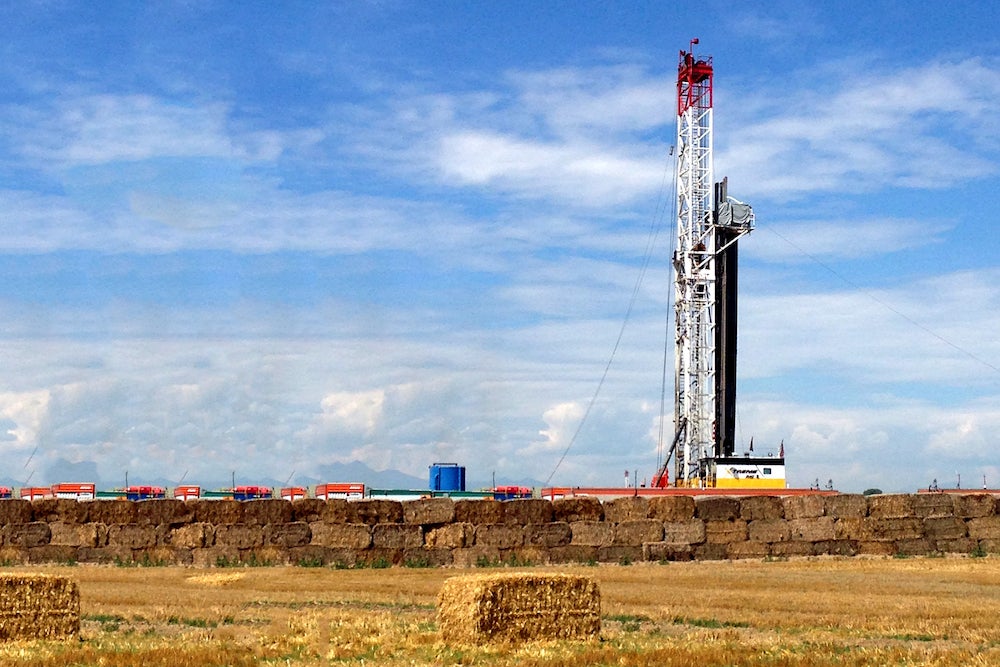 A bill that passed Virginia's House of Delegates bars access to information about the chemicals that energy companies use in fracking. Photo credit: Sierra Club Virginia

Virginia’s House of Delegates voted 59-37 on Monday in favor of a bill that would allow fracking companies to keep their chemical cocktails a secret.

As the Richmond Times-Dispatch reported, while fracking is not heavily used in Virginia, some energy companies have shown interest. Texas energy company Shore Exploration and Production Corp. has acquired about 86,000 acres of gas and oil leases for Virginia’s Taylorsville basin.

The bill was sponsored by Republican delegate Roxann L. Robinson, who introduced a similar bill last year. During Friday’s debate of the bill, she argued that “by protecting that actual recipe, it will foster more efficient and more advancements in the fracking industry.”

She claimed that HB1678 has since evolved into a “transparency bill” after it was amended to only cover information about chemical concentrations, not the chemicals themselves, according to the Times-Dispatch.

Robinson has also sponsored HB 1679, a separate bill that “authorizes the Director of the Department of Mines, Minerals and Energy (Director) to disclose [chemical names and concentrations] to additional Department staff or state or local officials to assist the Department in responding to an emergency.”

Many Virginians, however, have criticized the measures.

“As a physician, I have grave concerns about the dangers this may pose,” wrote Kimberly M. Cheek, M.D. of Stuarts Draft in an op-ed. “The director may disclose information in an emergency, but there could be no further dissemination.”

“Who determines what constitutes an emergency?” Cheek continued. “What happens to those who slowly develop symptoms caused by leaching of chemicals? I doubt vague and confusing symptoms that appear over time will be considered an ’emergency.’ If we can’t share information, how do physicians ever identify common symptoms?”

During fracking, or hydraulic fracturing, a high-pressure mixture of water, sand and chemicals gets injected into shale deposits under the surface of the Earth to release oil and natural gas.

In 2015, the U.S. Environmental Protection Agency (EPA) released a limited but alarming report that found there are nearly 700 chemicals used in the fracking process. Hydrochloric acid, methanol and hydrotreated light petroleum distillates were the most common additives. As EcoWatch noted then, even in low doses, these chemicals are known to cause skin irritation, chemical burns, headaches and blurred vision. At higher concentrations, exposure to these chemicals can cause shortness of breath, blindness and possibly death.

In December, the EPA released its widely anticipated final report on fracking confirming that the controversial drilling process impacts drinking water “under some circumstances.” In the report, the EPA identified cases of impacts on drinking water at each stage in the fracking water cycle.

The Sierra Club’s Virginia chapter is petitioning against HB1678 and its companion bill SB1292, warning that “big polluters want the toxic cocktail of chemicals used in fracking to be kept under wraps—and these bills would make it perfectly legal.”

At a subcommittee meeting on Thursday, Miles Morin, the executive director of the Virginia Petroleum Council, spoke in favor of Robinson’s bill as it protects industry’s secrets while maintaining full disclosure to regulators, The Northern Virginian Daily reported.

“With this protection, Virginia would still have one of the strongest chemical disclosure requirements in the country,” Morin said.

However, in an editorial from the Free Lance-Star, the editors note that this argument from energy companies “isn’t good enough” for residents fearful of fracking contamination:

“The argument from energy companies, using some state legislators as their megaphones, is that disclosure of the chemicals pumped into the ground would give away trade secrets.

“That argument isn’t good enough, considering what’s at stake in our part of the state. Leaders in King George and Westmoreland counties are trying to get a grip on what could be a major change in the character of one of the state’s most pristine areas. They want to be assured that the water supply in a rural region whose residents depend on well water is not going to be endangered. A refusal to reveal exactly what is being pumped into the ground might make one wonder if there isn’t a bit of risk involved.”

Travis Blankenship of the Virginia League of Conservation Voters explained to The Northern Virginian Daily that “this legislation goes far beyond protecting the competitive trade secrets the legislation attempts to get at and actively prevents landowners from knowing chemicals affecting their drinking water.”

“Specifically, we are concerned that localities would not have access to this information ahead of time in order to prepare for any potential accident,” Francis said.

The bill would have to be pass the state’s Senate before it reaches the desk of Democratic Gov. Terry McAuliffe.