Viral Video Shows a Tiny Koala Getting Kicked Out of a Tree, Find Out Why 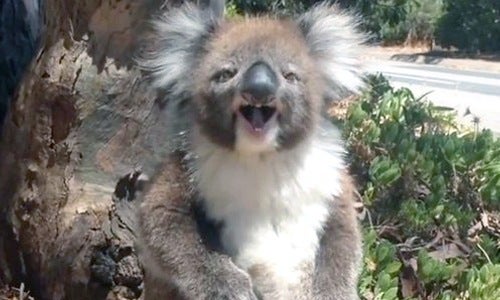 Koalas are typically quiet creatures, according to ScienceAlert. It’s hard to make a lot of noise when you sleep for 18 to 22 hours per day. But they can get a little rowdy between the months of August and February. The marsupials breed during these months, and that means males are competing for the attention of females.

This competition for a mate results in the kind of territorial skirmishes displayed in this video, which has more than 2 million views since Jan. 2:

https://www.youtube.com/watch?v=O0cAx1jLbJk
and make its dissatisfaction known.

While it’s likely he will be bullied out of access to females until he’s about four or five years old, Alicia Alexander mentions in the video description that he did eventually gain access to that tree when the older male wasn’t looking. “The little koala won as it had claimed the the tree by nightfall,” she said.

And here’s another fun tidbit via ScienceAlert:

At around the 0:29 mark, you get to hear another type of koala vocalization from the dominant male—a deep, grunting bellow, the purpose of which is to attract nearby females. Amazingly, researchers have discovered that these bellows have a pitch about 20 times lower than they should be, considering the koala’s size. According to Mary Bates at National Geographic, “it’s actually more typical of an elephant-sized animal.”

Back in 2013, researchers in the UK reported that these bellows—recordings of which were used to create T. rex roars in Jurassic Park—are produced by an organ found in no other animal on Earth. A team from the University of Sussex identified unique vocal cords inside koalas that are completely separate from their larynx (or voice box). “It’s the first evidence in a land-dwelling mammal of an organ other than the larynx that is devoted to producing sound,” Bates explained.