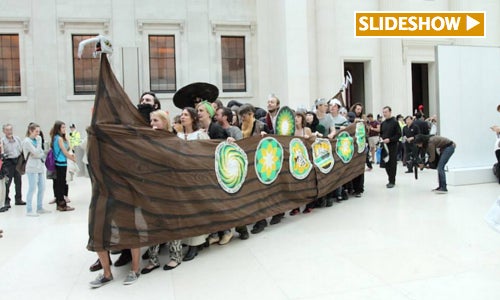 Many visitors to the iconic British Museum in London got more than they bargained for on Sunday, when hundreds of protestors descended on the Museum to protest against BP’s sponsorship of a major exhibition on Vikings.

The Viking exhibition is one of the museum’s flagship show-pieces at the moment and is the first on the subject at the museum for 30 years. At the center of the exhibition are the surviving timbers of a 37-meter-long Viking warship, the longest ever found and never seen before in the UK.

The three month exhibition is being funded by oil giant BP, which has sponsored the British Museum since 1996.

The oil company continues to plough millions into the British arts. Some eighteen months ago BP announced an investment of almost 10 million GBP in the British Museum, the National Portrait Gallery, the Royal Opera House and Tate Britain over the next five years.

This investment is seen as one of the most significant long-term corporate investments in UK arts and culture. It is also seen by anti-oil activists as classic greenwashing: whereby companies cleanse their image by investing in environmental projects or culture and the arts.

To this end, the oil company has been a target of continuing protests by anti-oil activists in the UK. The theatrical protest group BP or not BP? made sure that visitors to the museum saw a longship of a different kind on Sunday by organizing a protest flashmob with hundreds of protestors.

The protest group has been trying to highlight the difference between BP’s green image via sponsoring the British Museum to the reality of its operations on the ground, such as investing in the dirty tar sands to the deadly Deepwater Horizon spill in the Gulf.

So on Sunday some two hundred activists dressed as Vikings descended on the Great Court of the museum. The center-piece of the protest was a 15-meter longship with hordes of protestors inside.

According to BP or not BP? the “longship was decorated with a series of shields, graphically depicting BP’s misdeeds around the world: oil spills, tar sands extraction, climate change, human rights abuses, and blocking clean energy and environmental laws.” The activists then gave BP a symbolic Viking burial.

However, some activists were arrested before they made it into the building. One was arrested purely for looking like a Viking, with a cardboard shield. A BP or not BP? spokesperson said this was quite “clearly an unlawful arrest.” The person was later released without charge.

“We will not sit by and let our cultural institutions be used as a cheap PR tool by destructive companies,” said Sarah Horne, one of the protestors who took part in the flashmob. “BP provides less than 1 percent of the annual income of the British Museum, and yet gets enormous branding and public relations benefits in return, allowing it to hide its real activities around the world.”

Sunday’s protest was the latest in a series of performance protests by the group, who have also made a spoof films, launched a petition against the sponsorship deal and invaded the Museum itself three other times whilst dressed as Vikings and Norse gods.