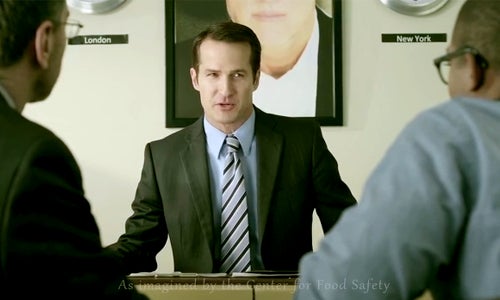 When deciding what produce to buy from the supermarket, the questions a shopper typically asks are pretty basic: How’s the color? Is it fresh? Can it withstand toxic chemicals that were once used to manufacture lethal nerve gas?

The Center for Food Safety reports Dow Chemical has developed genetically-engineered, pesticide-promoting corn and soybeans that can be repeatedly doused in 2,4-D, a powerful herbicide used in forming Agent Orange.

To get this information out, Center for Food Safety released a satirical “Mad Men” video featuring would-be Dow Chemical executives who are trying to market the genetically-engineered crops.

Dow Chemical is seeking U.S. Department of Agriculture (USDA) approval to sell these next generation crops as a solution to the growing weed resistance problems to Monsanto’s Roundup herbicide.

“Given the known problems and history of 2,4-D, it is astonishing that any company would brazenly promote such a toxic product. It’s bad for the environment, it’s bad for farm workers, and it’s bad for our health,” said Andrew Kimbrell, executive director of Center for Food Safety, in a prepared statement.

A petition asking the USDA to reject the crops, launched as part of the CFS campaign, has nearly 100,000 signatures.