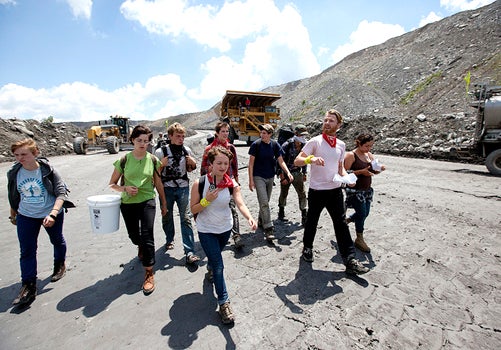 Reports have emerged of significant police brutality in relation to the 20 mountaintop removal protesters who were arrested for their participation in a demonstration at the Hobet 45 mining complex in West Virginia on July 28. The protesters remain in custody at the Western Regional Jail, with bail set at $25,000 each.

More than 50 people affiliated with the Radical Action for Mountain Peoples’ Survival (R.A.M.P.S.) campaign stopped mining work for three hours during the protest at the mine in Lincoln County in the largest disruption of an active mountaintop removal site. Several of the protesters locked themselves to a rock truck with banners reading “RESTORE OUR MOUNTAINS RE-EMPLOY OUR MINERS” and “COAL LEAVES CANCER STAYS.”

Twenty-year-old Dustin Steele of Matewan, WV, was beaten by authorities in custody according to witnesses in the jail, while another protester was seen dragged off the site by her pigtails. A third protester has a black eye in his mug shot.

“This brutality and disregard for safety is one of the clearest examples of the hold the coal industry has on the state government,” said Junior Walk of Whitesville, WV, “The blatant cooperation between law enforcement and the coal industry makes me embarrassed as a West Virginian.”

Demonstrators who left the mining site after police warnings were subjected to severe harassment from miners and their supporters. Authorities prevented their transport vehicles from driving down the public road to pick them up, forcing them to walk for four hours along the side of Mud River Road while police allowed pro-coal demonstrators to harass them.

Police arrested one activist who they accused of lying to them about not having identification, even though the only identification on him was a debit card, which is not a valid form of ID. After several hours, police confiscated his cell phone and debit card and released him with a ticket on the side of Rt. 94, hours from any town, forcing him to hitchhike home. An independent journalist was also arrested for photographing the incident.

Steele made the following statement before being taken into custody at the protest: “Hopefully the negative reaction of the folks in the coal field and the folks in the mine site won’t be extreme, but even if it’s extreme, realize that they’re feeling that same fear of the future as what we are. They’re oppressed by the same mechanisms and they feel it in the exact same way.”

Now, unless the bail requirement is made more reasonable, Steele will spend his 21st birthday, today, Aug. 1, in prison.