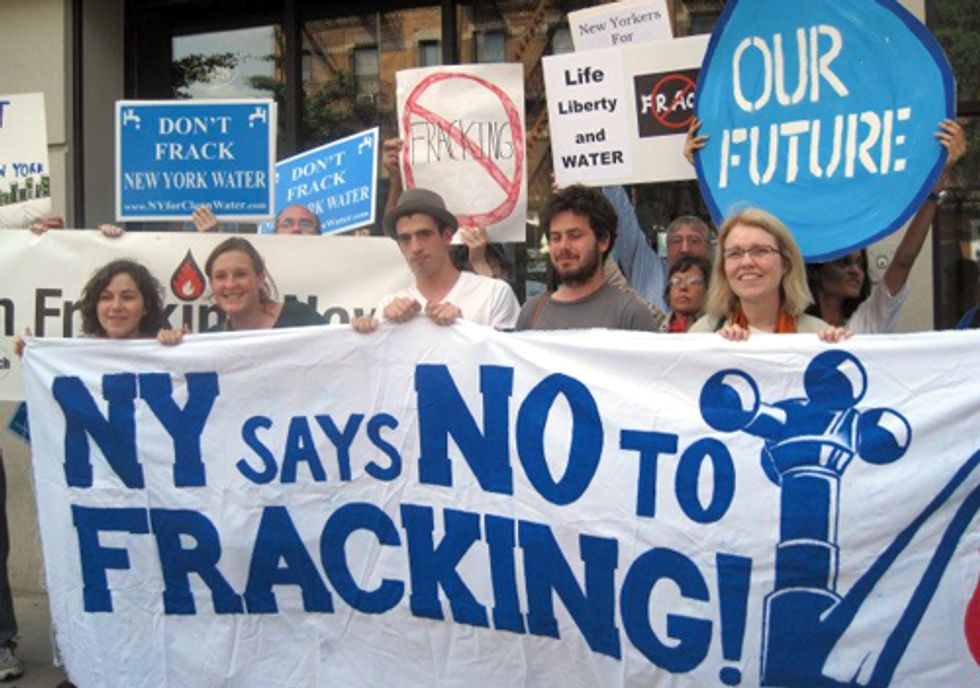 On June 14 Frack Action released a video that details many shattering flaws and inadequacies in the Department of Environmental Conservation's (DEC) review of fracking and Supplemental Generic Environmental Impact Statement (SGEIS), and questions the gas industry’s possible influence over the DEC Mineral Rights Division. Under the veil of a bad dream, the video takes the form of a puppet show, with the gas industry playing the part of the puppet master and the DEC Mineral Rights division as the gas industry’s puppet.

The release of Frack Action’s video comes in conjunction with the New Yorkers Against Fracking coalition’s rally outside of Gov. Cuomo’s office from 12–1 p.m. today, June 14. The noon rally is part of a New Yorkers Against Fracking statewide day of action. They will rally for a ban in front of Gov. Cuomo's office in the New York State Capitol and demand that it's not okay to turn any part of New York into a sacrifice zone. Frack Action will also deliver a copy of the video script to the governor, Frack Action’s statement about DEC's relationship with U.S. Environmental Protection Agency (EPA) Region 2, and the June 13 Physicians, Scientists and Engineers for Health Energy/Environmental Working Group technical document detailing the top 10 flaws of the SGEIS.

Mixing dark humor with hard facts and science, the video touches on the questionable nature of the public comment review process, many of the egregious flaws and inadequacies in the SGEIS, as well as key concerns about fracking that the DEC has not studied. The puppet show, a dream, is introduced by questioning how more than 13,000 public comments from 2009 took 20 months to review yet more than 66,000 comments on the recent SGEIS could be finished in less than a third of that time.

With the gas industry asking questions of the DEC Mineral Rights Division puppet, the video tackles many key concerns that have been raised about fracking. One such issue addressed is radon from the highly radioactive Marcellus Shale (radon being the #1 cause of lung cancer among non-smokers). Many scientists, as well as the EPA, have raised concerns about serious health ramifications from radon traveling with Marcellus Shale gas into people's homes and lungs. The video highlights how the DEC has dealt with the issue.

The release of this video follows what has been a week of revelations about the DEC’s inadequate and flawed review of fracking. First, Jon Campbell of Gannett News Service wrote a breaking article about NY DEC's relationship with EPA Region 2 that brings to light a number of issues, chief among them DEC's seeming aversion to the science and grave concerns raised by EPA Region 2 (see Frack Action’s statement). Then on June 13, leading scientists from Physicians, Scientists and Engineers for Health Energy (PSE) and the Environmental Working Group (EWG) released a technical document detailing the top 10 flaws of the SGEIS.

For example, the scientists took issue with the DEC's proposal to only drill in areas of deeper shale, a plan revealed on June 13 in the New York Times that appears to perpetuate what the scientists call "seemingly arbitrary, unscientific thinking behind the published draft plan." They note that state officials claim they can prevent pollution by limiting drilling to areas in the Marcellus Shale near the Pennsylvania border where the shale is at least 2,000 feet deep. The PSE/EWG report solidly refutes this faulty science.

In a news release, A.R. Ingraffea, president of Physicians, Scientists and Engineers for Healthy Energy and a professor of engineering at Cornell University who specializes in rock fracturing, said, “In light of the recent call by the U.S. Department of Energy for much more empirical scientific information about the safety of high volume hydraulic fracturing for shale gas, and the limited amount of solid scientific support for the program proposed for New York, it would be reckless and irresponsible to proceed with drilling at this time."

The developments this week are in line with a pattern that previously prompted Peter Kiernan, who served as counsel to ex-Gov. Paterson, to say on Feb. 28 on Capitol Pressroom that the only science on fracking is “political science.”

Regarding the developments this week and with the release of Frack Action’s video, John Armstrong of Frack Action said, “Gov. Cuomo has said that his decision on fracking will be based on science, not emotion. We hope that the governor will recognize that the DEC’s review of fracking couldn’t be farther from being the best science on which he has said he will base his decision, and that the best available science is in fact quite decisive that fracking cannot be done without jeopardizing the health and well being of New Yorkers.”