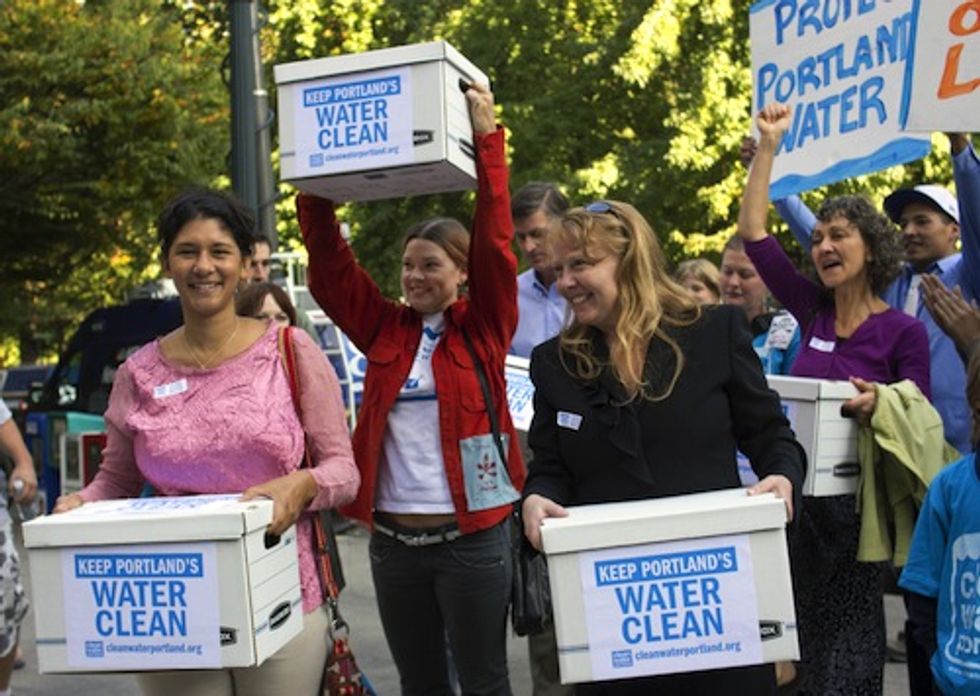 A broad coalition of Portlanders have resoundingly rejected fluoridation, by at least a 60-40 percent margin. In rejecting fluoridation, Portland voters agreed with the majority of western nations that there are safer, more effective and less intrusive ways to promote oral health than adding a chemical linked to thyroid disease, IQ loss and other ailments to the water supply, reports the Fluoride Action Network (FAN).

“We are proud of our Portland colleagues who used science and integrity to defeat fluoridation,” said Paul Connett, PhD, FAN's executive director.

Portland’s clean water campaign was spearheaded by Clean Water Portland (CWP), a broad coalition formed in August 2012 after a newspaper revealed secret ongoing fluoridation meetings with Portland City Council members that were illegally kept off the record. With virtually no public input, the city council mandated fluoridation for the city on Sept. 12. CWP then led an unprecedented effort that gathered over 40,000 signatures in less than 30 days to halt the mandate and force the referendum vote.

Fluoride chemicals are the only chemicals added to public water for the purpose of medication. Most western countries, including the vast majority of Europe, do not fluoridate their water.

“Most of Portland’s media falsely reported that fluoridation promoters had science on their side and that opponents used emotion,” said Connett. “Those opposed did their homework, relying on recent scientific findings from the National Research Council (NRC) and Harvard that raise serious questions about the safety of current fluoride exposures."

In 2006, the prestigious NRC warned that current fluoride exposures in the U.S. may increase the risk of thyroid disease, endocrine disruption, neurological disorders and bone damage–particularly among people who have medical conditions that increase their vulnerability to fluoride. The NRC called on scientists to investigate fluoride’s role in chronic disease, but government health authorities have opted against funding such research.

Portland’s vote comes just six months after voters in Wichita, KS soundly rejected fluoridation by a 20 percent margin, and follows close on the heels of an announcement this April that Israel will be ending its mandatory fluoridation program. In Ireland, legislation was proposed this spring that would make it a criminal offense to add fluoride to public water supplies, while in Canada, the number of people drinking fluoridated water has dropped by about 25 percent since 2008.

“The twenty-first century does not take well to anachronistic medical practices, and fluoridation is no exception. This is why more than 120 communities have rejected fluoridation over the past three years alone,” said FAN's Campaign Director, Stuart Cooper. "The trend is towards less fluoridation, not more."

The breadth of the coalition was reflected in polling data showing bipartisan opposition to fluoridation among Democrats, Republicans and independents alike, and overwhelming opposition among communities of color.

Voters who rejected fluoridation were concerned by research showing that low-income communities are at highest risk of fluoride’s adverse effects without any benefits. This fact was not lost on Portland’s low-income neighborhoods, which voted overwhelmingly against fluoridation.

Fluoridation proponents had a massive near-million dollar war chest. They used their nearly four to one funding advantage and media clout to flood Portland with misleading ads and editorials touting fluoridation as an urgently needed tool for solving the “dental crisis” in the city’s poor neighborhoods.

But there really wasn’t a dental crisis in Portland as the Oregon Department of Health’s own reports indicate. Fluoridationists tried to hide this inconvenient truth. The most recent Smile Survey shows that Portland children’s decay rates improved since five years ago without fluoridation and, in fact, are better than most fluoridated cites.

“Fluoridationists had no evidence that any Portland child was fluoride-deficient; but did prove that some Portland children are dentist-deficient. We urge the legalization of Dental Therapists in Oregon who will treat the low-income children who dentists refuse to treat,” said Connett.