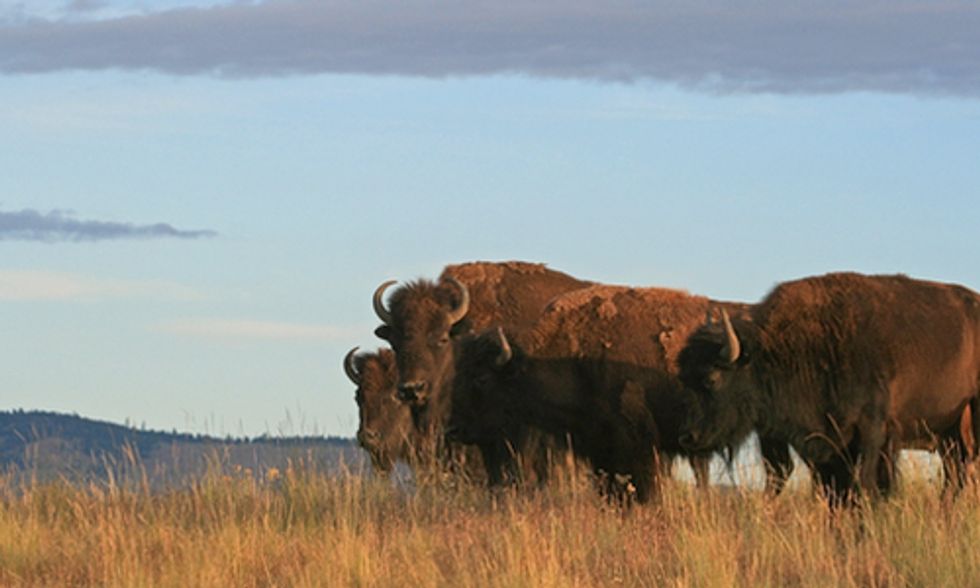 Efforts to conserve and restore wild bison won a victory Monday when a Montana judge rejected an effort by opponents of bison restoration to classify the iconic animals as livestock instead of wildlife under state law.

Once numbering 30 million across the Great Plains and Rocky Mountains, wild bison were almost driven to extinction by hunters in the late 19th century.
Photo courtesy of Shutterstock

If it had been accepted, the argument rejected by Montana District Judge John McKeon would have treated wild bison as livestock under Montana law once the animals were captured and held in quarantine as a prelude to wild bison restoration efforts. A legal classification as livestock, in turn, would have transferred jurisdiction over quarantined bison from the Montana Department of Fish, Wildlife and Parks to the Montana Department of Livestock—a move that threatened to impede any future efforts to restore native bison as a wildlife species in appropriate portions of their historic habitat.

However, Judge McKeon ruled that wild bison remain classified as wildlife under state law regardless of their confinement in quarantine.

“This ruling rightly discredits what amounted to a stealth attack on future efforts to restore wild bison in Montana,” said Earthjustice attorney Tim Preso, who represented Defenders of Wildlife and the National Wildlife Federation in opposing Citizens for Balanced Use’s argument. “Wild bison are classified as wildlife under Montana law. Now it is time to restore wild bison as wildlife on the Montana landscape.”

Monday’s ruling represents the latest chapter in a successful legal effort by the conservationists to support a plan by the Montana Department of Fish, Wildlife and Parks to transfer a group of disease-free wild bison from a quarantine facility near Yellowstone National Park to the Fort Peck and Fort Belknap Reservations in northeast and north central Montana.

Citizens for Balanced Use filed a lawsuit in 2012 to stop the transfer program, and the Montana district court responded by issuing a preliminary injunction that halted the planned bison transfer to Fort Belknap lands. But the conservationists appealed that injunction ruling to the Montana Supreme Court, which overturned the injunction in a decision issued in June 2013. The Fort Belknap transfer went forward later that summer.

“Judge McKeon has now validated the obvious,” said Defenders of Wildlife program director Jonathan Proctor. “Just because wild Yellowstone bison were moved to a different location doesn’t make them any less wild. These bison were moved specifically to start a new wild herd and are managed as wildlife. This victory will enable wild bison recovery to continue on willing locations in Montana—such as the Fort Peck and Fort Belknap Reservations.”

Once numbering approximately 30 million across the Great Plains and Rocky Mountains, wild bison were almost driven to extinction by market hunters in the late nineteenth century. Montana was among their last strongholds, but the slaughter persisted until in 1903 only about 25 individuals remained in the wild, located in the Pelican Valley of Yellowstone National Park. Since then, Yellowstone’s wild bison population has rebounded to approximately 4,000 animals, and Montana wildlife officials continue to consider plans to transplant some of these wild bison to the species’ historic plains habitat.