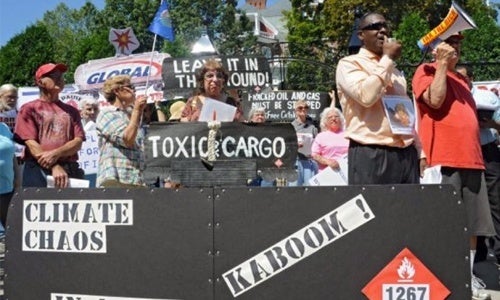 In what came as a welcome surprise to activists in Albany, New York, the New York State Department of Environmental Conservation (DEC) reversed an earlier decision and now will require a full environmental review for a proposed tar sands oil heating facility at the Port of Albany.

“It is good for New York State that the DEC came to a proper decision in one of the most important environmental matters facing the state,” said Riverkeeper president Paul Gallay. “We look forward to participating with the state on a full public safety and environmental review that is robust and protective of our communities and our waterways.”

Riverkeeper is one of many groups fighting the plan by Global Partners to add tar sands oil to the Bakken oil it is already moving down and along the Hudson River in large amounts, efforts highlighted in this recent New York Times Op-Doc.

Albany has become the largest distribution hub for crude oil on the East Coast due to its rail access and its port on the Hudson River and this transformation happened with so little fanfare that the local community was initially unaware of what the DEC had permitted.

There were no ribbon cutting ceremonies or big public announcements made by local government officials who were aware of what was happening. The mayor of Albany could be found cutting ribbons for the opening of Subway shops or bars, but not a word about the 2.8 billion gallons a year of oil that were permitted to arrive in Albany by train by the DEC.

And then the first oil tanker that was filled with 12 million gallons of Bakken oil loaded from rail cars and sent off down the Hudson promptly ran around. Luckily no oil was spilled and, as a result, local people began to ask questions just as Bakken trains began to derail and explode with alarming frequency, as noted in this short documentary about the risks posed by oil trains to Albany and the Hudson.

In addition to Riverkeeper, efforts to require a full environmental review for Global’s application were supported by Earthjustice, Sierra Club, Scenic Hudson, Center for Biological Diversity, Environmental Advocates and the local group People of Albany United for Safe Energy (PAUSE).

Earthjustice filed a lawsuit last year challenging the DEC decision to not require a full environmental review on behalf of several of the groups involved as well as the local tenant association for a community located directly along the rail tracks. Chris Amato of Earthjustice led the efforts and welcomed this decision.