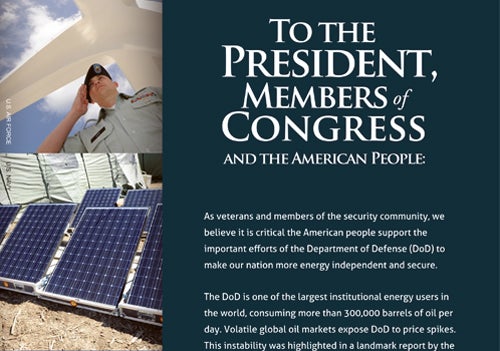 The Pew Project on National Security, Energy, and Climate today released a letter signed by more than 350 veterans, including retired generals and admirals, as well as former Armed Services Committee chairmen Sen. John Warner and Rep. Ike Skelton, urging the president and Congress to support the Pentagon’s initiatives to diversify its energy sources, limit demand and lower costs.

The letter stresses the importance of the military’s ability to deploy clean energy technology to reduce dependence on fossil fuels and strengthen our national security, energy independence and economic security.

As the world’s largest consumer of liquid fuels, the military is both becoming more energy efficient and working to test and certify advanced biofuels in its ships, planes and vehicles. By investing in alternative fuels today, the Department of Defense (DoD) is positioning itself to take advantage of these new products when they become cost-competitive with conventional fuels. This second generation of “drop-in” biofuels is produced from domestic non-food-stock plant and biomass sources, requires no changes to current engine design, and provides the same or better performance than conventional fuels.

“Today, it takes 22 gallons of fuel per soldier per day to support combat operations, a 175 percent increase over the Vietnam War era,” said Phyllis Cuttino, director of the Pew Project on National Security, Energy, and Climate. “The national security community agrees that both the DoD and the nation as a whole must reduce their dependence on foreign oil. However, some in Congress are working to cripple the department’s ability to move forward on energy innovation with its advanced biofuels program. This would hurt DoD’s capacity to shield its budget from oil price shocks and ensure operational effectiveness.”

For every $10 increase in a barrel of oil, the department pays an additional $1.4 billion annually—money that comes at the cost of operations and readiness. Some congressional amendments, if adopted, would bar DoD from purchasing or using alternative fuels and could also affect the fuels used to power unmanned vehicles for military operations.

“The bottom line is that the four branches of our military need our nation’s full support to continue seeking energy solutions through innovation, as their predecessors have done for generations,” added Sen. Warner, a former Navy secretary as well as former chairman of the Senate Armed Services Committee. “Our nation’s energy security is linked to increasing the diversity of domestic sources of energy, both conventional and alternative, to lessen our reliance on foreign sources.”

“The development of renewable energy sources is a national security, economic and environmental imperative,” Gen. Anthony Jackson, USMC (Ret.), said. “The next generation of Americans is deserving of our commitment to become less dependent on foreign fossil fuels.”

In its report More Fight, Less Fuel, the Defense Science Board noted: “DoD’s energy problems are not unlike those of the nation. Just like the nation, to reduce its energy risks, DoD must significantly improve its energy productivity and use renewable sources where possible … As these technologies find their way into commercial products, they will also limit our national dependence on foreign oil.”

Innovation has been a consistent priority and role for the U.S. military. The military’s leadership, cooperation with the private sector and early adoption have been critical to the commercialization of many technologies such as semiconductors, nuclear energy, the Internet and the Global Positioning System. Maintaining energy innovation, inside and outside the DoD, is critical to our national security.