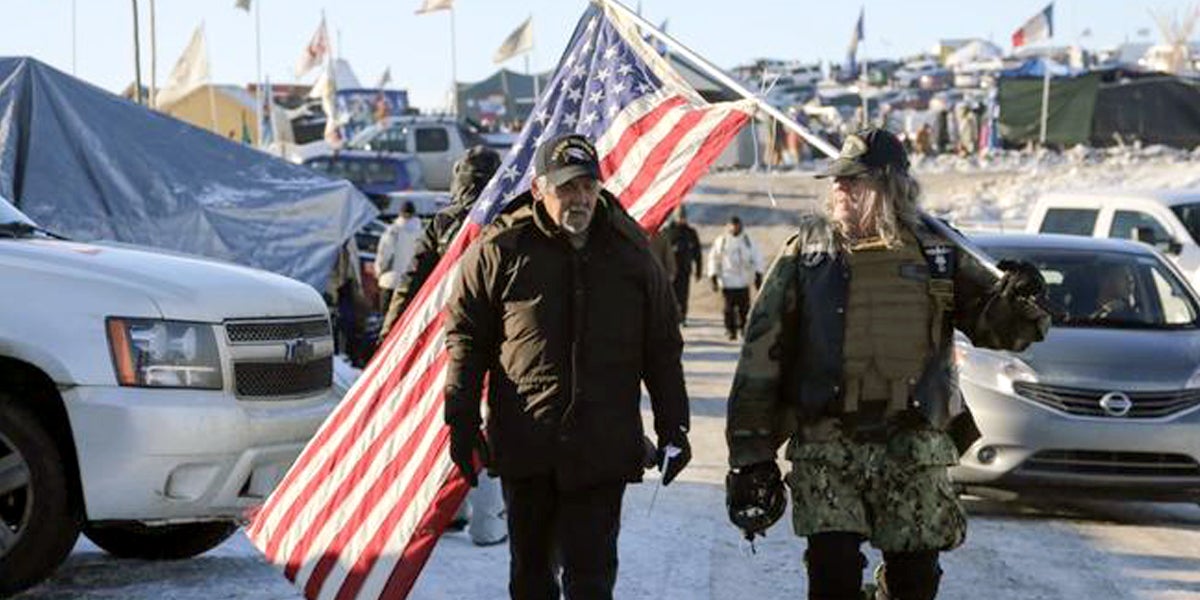 Hundreds of U.S. veterans that joined the historic uprising at Standing Rock at a pivotal moment ahead of a key victory are turning attention to their next act of solidarity, this time to stand with communities suffering from the ongoing water crisis in Flint, Michigan.

One of the main organizers who brought together more than 2,000 veterans to form a human shield around water protectors at Standing Rock in the face of an anticipated violent crackdown, U.S. Army veteran Wesley Clark Jr., said that while details of the trip to Flint aren’t finalized, the move is on the agenda.

Protecting sacred land and water is a duty we all share. We will continue to stand together. #NoDAPL pic.twitter.com/HEkaUostAt

“We don’t know when we are going to be there,” Clark, who is the son of retired U.S. Army General and former Democratic presidential nomination hopeful Wesley Clark Sr., told the Flint Journal, “but we will be heading to Flint.”

“This problem is all over the country,” he added. “It’s got to be more than veterans. People have been treated wrong in this county for a long time.”

Local residents told the Flint Journal that they hope a visit from the veterans could help bring much-needed media attention to the water crisis, which has fallen out of the news spotlight in recent months even though thousands of homes left with contaminated pipes still don’t have guaranteed access to safe drinking water.

Both the struggle against the US$3.8 billion Dakota Access Pipeline and the Flint water crisis have been described as emblematic cases of environmental racism.

The months-long struggle spearheaded by the Standing Rock Sioux Tribe in North Dakota—met with brutal repression including the use of dogs, pepper spray, rubber bullets, water cannons in freezing temperatures and other military equipment—scored a victory Sunday when the U.S. Army Corps of Engineers denied a final permit for developers to tunnel under Lake Oahe to complete the pipeline on its current path. Although Standing Rock Chairman Dave Archambault II has encouraged water protectors to head home for the winter after the win, many have decided to stay at the resistance camps, bracing for more battles against the contentious project, which could be re-approved on an alternate route.

The 1,172-mile pipeline was already rerouted once from its original path near the majority-white town of Bismarck, North Dakota, to pass instead through treatied Native land and sacred Indigenous burial sites near the Standing Rock Sioux reservation.

In Flint, the water crisis was sparked in April 2014 when an unelected emergency manager switched the city’s water source from Lake Huron to the long-contaminated and corrosive Flint River. Complaints about water quality surfaced within months, but it wasn’t until October 2015 that Flint’s water was switched back, leaving a massive infrastructure problem of heavily corroded pipes and lead contamination. According to local media, an estimated 550 homes have had their lead-contaminated pipes swapped for new ones in the town of nearly 100,000 people.

Some have drawn parallels between the racial dimensions of the threat the Dakota Access Pipeline poses to the Standing Rock Sioux’ water supply and the water contamination impacting mostly Black residents in Flint. In both cases, authorities have been slow to take the concerns of the affected racialized communities seriously and act on their demands.

“These are people who have been just as oppressed and in some other forms more oppressed than Black folks,” Flint resident and veteran George F. Grundy told the Flint Journal in reference to the struggle at Standing Rock, adding that shows of solidarity have made him believe that “the human spirit is larger than any corporate entity.”

Before the veterans head to Flint, Clark and a group of his fellow veterans offered a powerful show of historical reckoning with Native Americans in North Dakota on Monday.

In front of Indigenous leaders, some of the veterans recognized the history of genocide against Native Americans and asked for forgiveness for the military’s role in war crimes and violent attempted extermination that targeted tribes. Sioux tribe spokesperson Leksi Leonard Crow Dog accepted the apology.

The fight against the Dakota Access Pipeline has brought together some 200 Native American tribes in support of the water protectors and garnered solidarity from hundreds more environmental, human rights and Indigenous groups.

Reposted with permission from our media associate teleSUR.