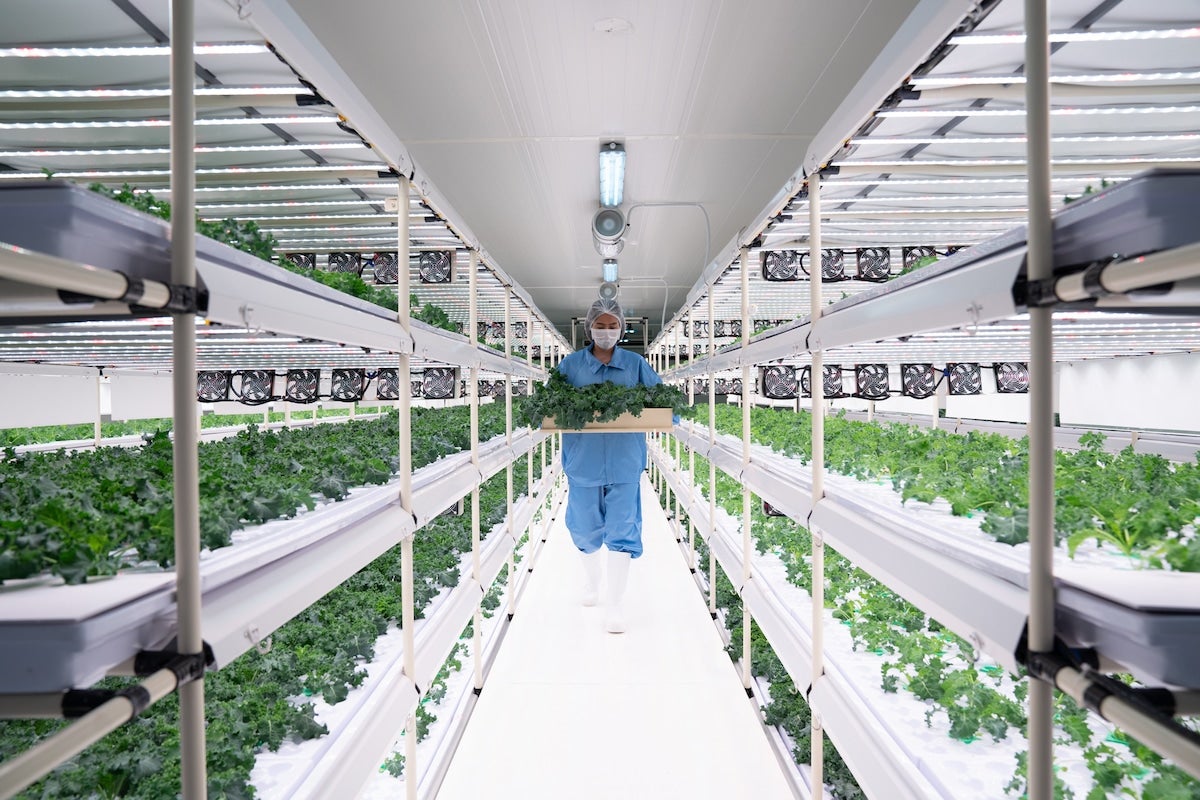 The future of food is growing up. With the climate crisis and disruptions in the supply chain, “controlled-environment agriculture,” which has been around since the 1970s and includes vertical farming, is gaining more attention as a way to grow healthy food using artificial light, reported The New York Times. The price of LED lights dropped by as much as 94 percent from 2008 to 2015, which helped growing operations move indoors.

One of the biggest upsides to vertical farming is the space and soil it saves.

“Crops are grown in spaces ranging in size from small boxes that can be placed in homes or offices to industrial production facilities with several thousand square meters of growing area,” said Professor of Digital Agriculture at the Technical University of Munich (TUM) Senthold Asseng, in an interview with TUM. “Vertical farming has the potential to grow up to 100 layers of crops above one another on one hectare of land. This will conserve large areas of agricultural land.”

Some benefits to vertical farming include using far less water, protection from traditional pests because of the indoor environment and crops being able to be harvested numerous times per year.

“Vertical farming allows multiple harvests of a cropper year and can make a substantial contribution to global food security. If we optimize the growing conditions for a crop in a closed system, cut off from the outside world, we can reduce water requirements by up to 90 percent and eliminate the need for chemical crop protection,” Asseng told TUM.

According to data analysis firm ResearchAndMarkets.com, vertical farming is projected to become a $9.7 billion dollar industry worldwide by 2026, up from $3.1 billion last year, reported Business Wire.

One of the biggest issues with vertical farming is that a lot of energy is needed for all those grow lights, but it offers benefits in terms of control.

“Vertical farming has so far proven highly energy-intensive. This has made it unprofitable currently for crops such as grains, although it would be quite conceivable to increase the global mean annual per-hectare wheat yield by a factor of 6000,” Asseng said to TUM. “I see also a major potential for the production of pharmaceutical and protein crops. Quality, nutrient content and flavors can be precisely controlled in vertical farming. New crop varieties specifically bred for this type of farming offer promising improvements in terms of quality.”

“The success of vertical farming will depend on whether the products can capture a market share. Acceptance on [the] part of consumers will also play an important role. People may take some convincing,” Asseng told TUM. “We also need farmers who are willing to try vertical farming. Farmers have the know-how to grow crops and have extensive knowledge of cropping systems. We should therefore involve them in the development of vertical farming technologies.”

Vertical farming may not displace farming on land, but it can provide an alternative to traditional farming that makes an important contribution to the global food yield.

“I see a big opportunity for vertical farming for the production of healthy and sustainable food. However, I think it will never entirely replace conventional farming in fields. But vertical farming can and will play an essential role in food production in the future,” Asseng said.