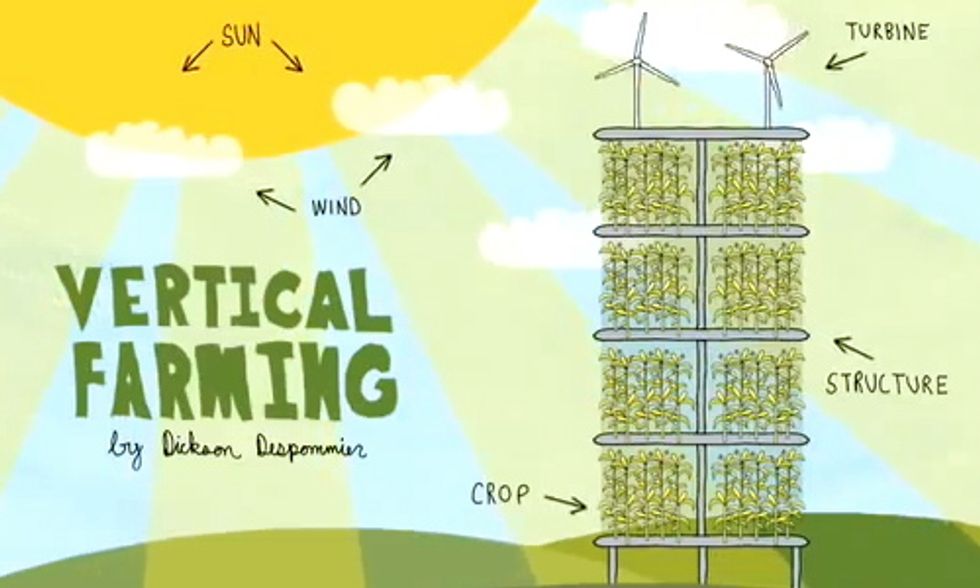 By applying conservative estimates to current demographic trends, the human population will exceed 10 billion in 2050. In order to grow enough food to sustain future generations using today's growing practices, 20 percent more land than what is represented by the country of Brazil will be needed, according to Dr. Dickson Despommier's The Vertical Farm blog.

Vertical farming could be the solution to the world's impending food shortage. Photo credit: Dickson Despommier

Despommier, a renowned Columbia University professor who teaches microbiology and public health, said more than 80 percent of the world's land that is suitable for raising crops is in use, and about 15 percent of that has been wasted by poor management practices.

To solve this critical problem, Despommier has endorsed vertical farming, which involves multi-story buildings that use either artificial or natural light to grow and raise plants and animals, respectively. Apart from saving space, vertical farms are free of insects and pesticides, and would not be affected by drought, flooding and disease.

"New York City—where I live—that's a big city, right? Eight million people," said Despommier in a viral YouTube video. "These 8 million people consume food that it takes the state of Virginia in land mass to grow. We have to find another way to farm and [vertical farming] is the other way ... "

Why Traditional Farming Won't Cut It

In 2011, the United States lost some 110 billion dollars worth of grain crops due to a protracted drought throughout the American Midwest. Unless a miracle happens, it appears almost certain that the state of California will be the next victim of drought in 2014.

This could affect virtually every U.S. citizen, with significantly higher food prices and may even affect food availability, as well. Cities only occupy some 2-3 percent of the Earth’s landmass, but emit over seventy percent of the atmospheric carbon dioxide. Nearly fifty percent of us now live in cities. Seven billion people require farmland equivalent in landmass to the size of South America. This calculates out to an astounding 6,890,000 square miles!

That means that cities need some 3,440,000 square miles of land to satisfy their daily caloric needs. From 1950s to the present, the Brazilian rainforest has been negatively impacted by encroachment, mainly for the sake of agriculture, sacrificing some 700,000 square miles of hardwood forest for farmland to feed its own growing population.

The Advent of Vertical Farming and Its Innovative Technologies

In 2013, FarmedHere pioneered commercial vertical farming in Bedford Park, IL with its indoor "aquaponic" and "aeroponic" growing systems that create local produce in a sustainable farming environment. They reuse 97 percent of fresh water, use no herbicides or pesticides, can grow year-round. The two-story building (formerly an abandoned warehouse) is windowless and utilizes 90,000 square feet of growing space.

Singapore recently announced that Sky Greens, a commercial version of a vertical farm, is now up and running. Sky Greens is a four-story, transparent structure outfitted with specialized growing systems that produce leafy green vegetables. It uses sunlight as an energy source, and captures rainwater to drive an innovative pulley system, which rotates the grow racks, ensuring an even distribution of sunlight for all the plants.