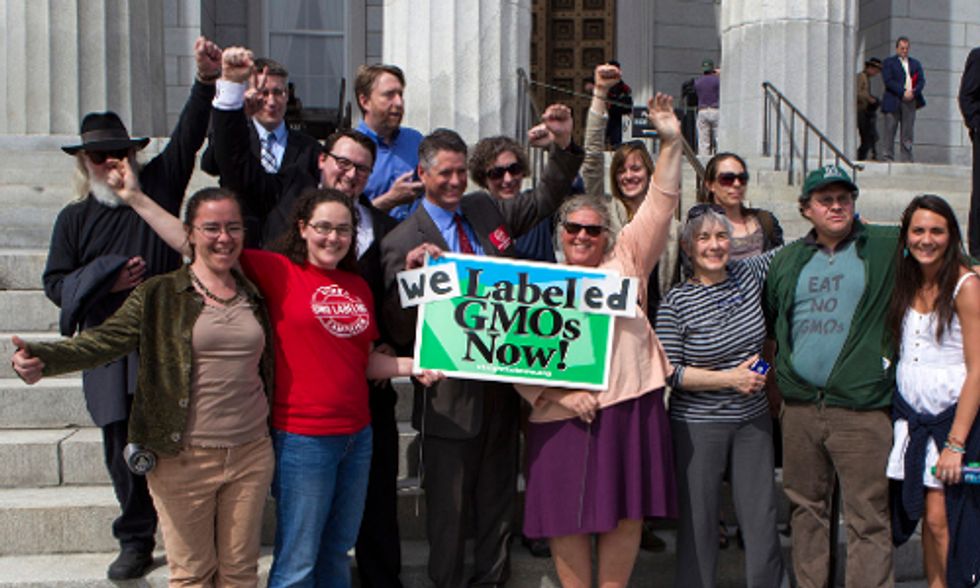 Much fanfare met the May 8 historic achievement in Vermont, in which the state passed the first no-strings-attached bill requiring labeling of genetically engineered (GE) foods. Fanfare from individuals and organizations who care to know what’s in the food they eat each day, that is.

The Grocery Manufacturers Association (GMA) and other trade associations? Now that’s a different story. The GMA, the International Dairy Foods Association, the National Association of Manufacturers and the Snack Food Association filed a lawsuit yesterday in federal court challenging the constitutionality of the law.

The same day that Gov. Peter Shumlin (D) signed the bill into law, the GMA issued a statement vouching for the safety of GMO (genetically modified organisms) crops and promising a lawsuit, stating, “The government ... has no compelling interest in warning consumers about foods containing GM ingredients, making this law’s legality suspect at best.”

Many groups pushing for GMO labeling beg to differ, and, meanwhile, 64 countries have passed labeling laws and more than 60 state bills were introduced over the past year. Connecticut and Maine both successfully passed GE labeling laws, though they are contingent on other states in the region passing laws before they would go into effect. The Vermont GE labeling law is the first to pass without such a trigger.

“After years of good old-fashioned work, and playing by the rules, the grassroots labeling movement achieved its first real victory this year,” said Organic Consumers Association Founder and Director Ronnie Cummins of the Vermont labeling law.

Why is the battle to label GMO foods so important to so many people?

As explained by the plaintiffs in the GMA lawsuit factual background:

If a person lives in the Unites States for any period of time and does not restrict all of her food purchases to organic food, she is almost certainly consuming ingredients from GE plants on a daily basis … The vast majority of foods sold in grocery stores in the United States today contain some amount of at least one ingredient that is connected to a GE plant.

That’s right, on a daily basis. Andrew Kimbrell, executive director for Center for Food Safety, which has been active in the push for GE labeling, succinctly sums it up: “Transparency in a sector that is integral to our lives every single day is absolutely essential.”