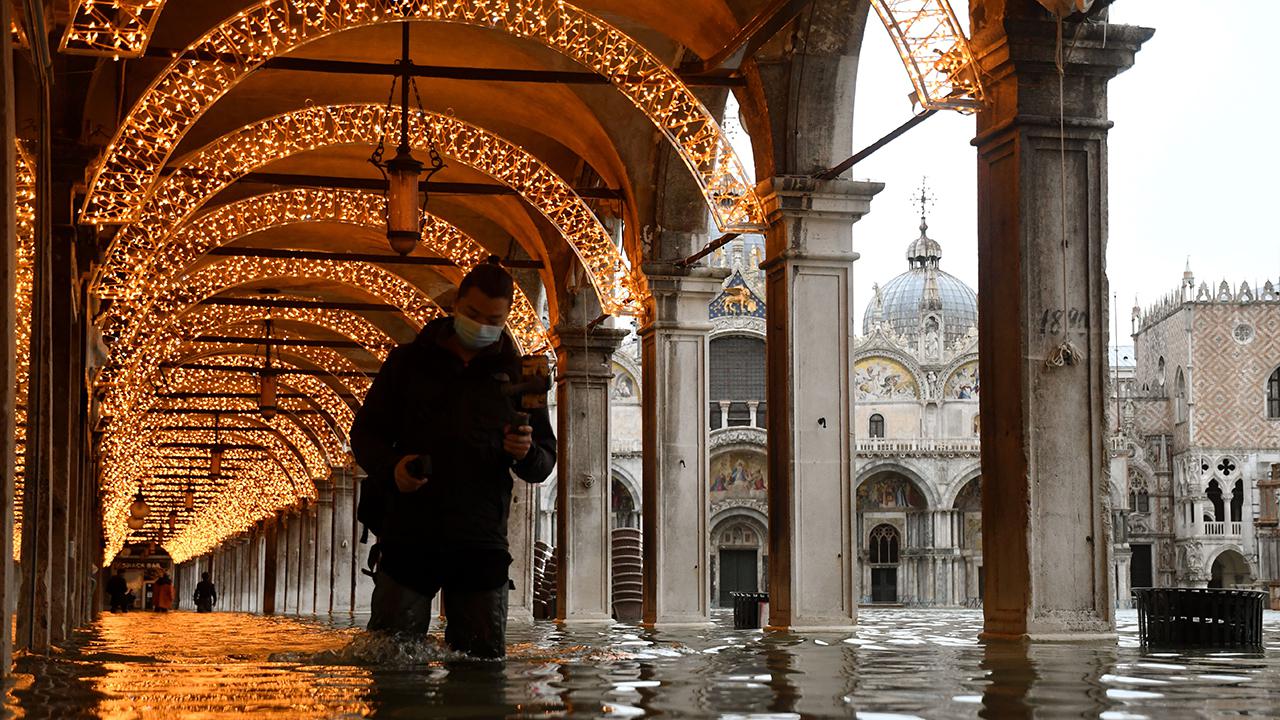 A man walks across an arcade by a flooded St. Mark's Square on Dec. 8 in Venice following a high tide "Alta Acqua" event following heavy rains and strong winds, and the mobile gates of the MOSE Experimental Electromechanical Module that protects the city of Venice from floods, were not lifted. ANDREA PATTARO / AFP / Getty Images

Flood waters swamped Venice’s iconic Saint Mark’s Square on Tuesday, despite the implementation of a barrier system that was supposed to protect the city from the flooding events that are getting more frequent because of the climate crisis.

“The situation is terrible, we’re under water in a dramatic way,” the church’s head procurator Carlo Alberto Tesserin told Italian media, as The Guardian reported.

The flooding came despite the fact that the city had finally installed a system of retractable flood barriers called MOSE. However, the system failed to activate because of a mistaken weather forecast.

“The situation is really bad as we weren’t expecting it,” Matteo Secchi, head of the activist group Venessia.com, told The Guardian. “It’s frustrating as we thought that with Mose this kind of thing wouldn’t happen any more, but instead we’re back to square one. It’s the same old problem.”

The higher than expected tide was also driven inward by stronger winds than predicted, according to The Associated Press.

“Unfortunately, the weather is freer than us. It does what it wants,” Venice Mayor Luigi Brugnaro told The Associated Press.

In addition to flooding the church, the water also inundated some shops and businesses. The damage is not yet known, according to The Guardian. However, the flood is likely to put a further strain on shop or restaurant owners already suffering from a lack of tourism due to the coronavirus pandemic, The Associated Press pointed out.

The MOSE flood barrier was first designed in 1984 and was supposed to be installed by 2011, according to The Guardian. However, it was beset by corruption and delays. It was originally supposed to cost two billion euros, but the final price tag was seven billion, according to AFP.

The long-awaited barrier successfully protected Venice from an approximately four-foot high tide in October of this year. Its final installation came about a year after Venice experienced its worst high tide in more than 50 years during November 2019, an event that Brugnaro blamed on climate change. There were only 10 “exceptional tides” in Venice between 1923 and 2000, but that number rose to 14 between 2001 and 2019, according to InsideClimate News. The November 2019 flood covered more than 85 percent of the city and killed two people.

MOSE consists of 78 barriers and is designed to protect the city from up to 10 feet of flooding, according to The Associated Press.

Brugano emphasized that the project is still being tested, and that lessons from Tuesday’s failures will be taken into account. He said that protocols would be developed to activate the system more quickly. For now, the city is working to activate the barrier to protect itself from a high tide of 1.2 meters predicted for Wednesday.

However, some say the barrier can only ever be a short-term fix for the problem of climate change. Sea level rise is projected to swallow Venice by 2100 if nothing is done to lower greenhouse gas emissions, InsideClimate News reported.

University of Padua Maritime Construction professor Piero Ruol pointed out that even best-case-scenario projections for sea level rise would require the barriers to be shut more than six months a year, which would devastate the ecosystem of Venice’s lagoon.

“Therefore, the MOSE can not be considered a solution that ‘lasts forever’ for protecting Venice from flooding,” he told InsideClimate News, “and it is time to think of new solutions for solving this delicate conundrum, in the face of climate change.”