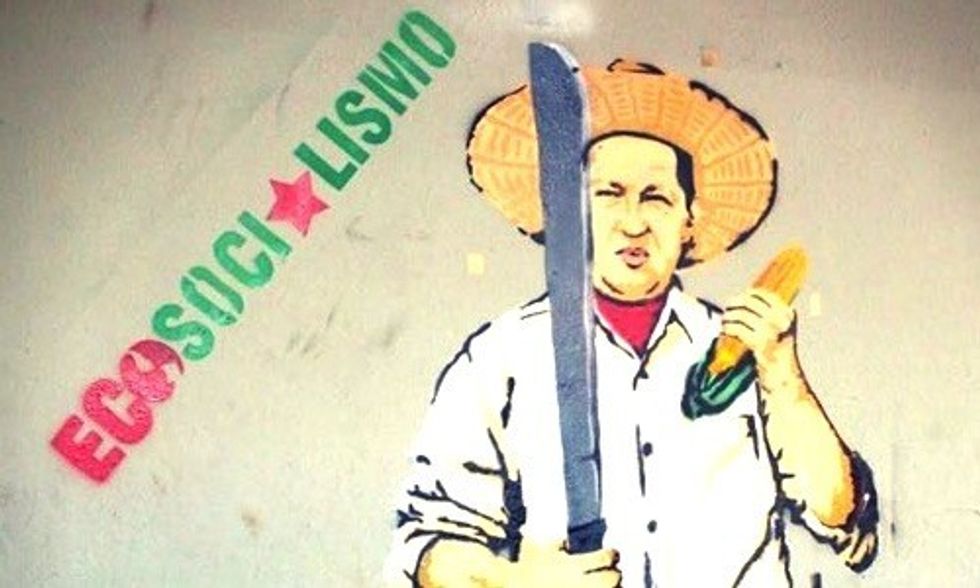 Venezuela approved a new law on Dec. 23, 2015, that imposes one of the world's toughest regulations on genetically modified organisms (GMOs).

The anti-GMO and anti-patenting seed law was approved by the National Assembly of Venezuela in its final session. Today, the new opposition coalition—the Roundtable of Democratic Unity—will take over.

The Seed Law seeks to consolidate national food sovereignty, regulate the production of hybrid seed, and rejects the production, distribution and import of GMO seeds, according to GMWatch. The law will also ban transgenic seed research.

The law will establish the National Seed System, a central body that will implement the new law. The group will monitor and sanction any agricultural violations, with a focus on the protection of traditional seeds, teleSUR reported.

The legislation, which comes after years of collective grassroots efforts, was promptly signed by Venezuela's President Nicolas Maduro.

"Approval of the Seed Law was pending since last year after being proposed through a national dialogue process in 2013," teleSUR reported. "Public consultations have sought popular input on the law, and campesinos [farmers] and environmental advocates have long urged for its approval."

Here is Article 1 of the law, as laid out by the Centre for Research on Globalization, which described the new rule as "one of the most progressive seed laws in the world":

The present Law has as its objective to preserve, protect, and guarantee the production, propagation, conservation, and free circulation and use of seed, as well as the promotion, research, distribution, and commercialization of the same, based on a socialist agroecological vision, with the aim of consolidating our food security and sovereignty, prohibiting the release, the use, the propagation, and the entrance into the country and the national production of transgenic seeds as well as the patents and right of the breeder over the seed, in a manner that is sovereign, democratic, participatory, co-responsible and in solidarity, making special emphasis on the valorization of the Indigenous, afro-descendent, peasant and local seed, that benefits biodiversity and helps to preserve life on the planet in conformity with what is established in the Constitution of the Bolivarian Republic of Venezuela.

1. Promote the transition from conventional systems of production based on monoculture and the use of agrochemicals with agro-industrial and/or corporate seed for conventional use, to an agroecological system and the preservation of the environment in the short, medium and long term, based on agro-biodiversity.

2. Promote the production of seeds that are necessary to guarantee national production, with the goal of avoiding importation and achieving national sovereignty.

3. Promote the transition to communal and eco-socialist agriculture, in order to protect agro-biodiversity by means of the production of local, peasant, Indigenous and Afro-descendant seed.

4. Revalorize and re-legitimize the local, traditional and ancestral knowledge wisdom, beliefs and practices of the peasant, Indigenous, Afro-descendant and other communities.

5. Prohibit the privatization of seed.

The new Seed Law provides the conditions to produce food “under an agro-ecological model that respects the pacha mama [mother earth] and the right of our children to grow up healthy, eating healthy,” Maduro said on his television show in December 2015.

However, implementation of the Seed Law is likely to prove difficult. The slew of legislation approved by the outgoing United Socialist Party of Venezuela bloc during their final December 2015 session was called “unconstitutional” by the newly elected Roundtable of Democratic Unity coalition, according to a Venezuelanalysis report.

“The effects of this session are invalid,” a coalition legislator Alfonso Marquina said. The group won a key two-thirds majority that enables it to to challenge Maduro.

The opposition party has vowed to “reestablish order and the Constitution in the new year.”

Nonetheless, as Venezuelanalysis noted, the Supreme Court ruled that the outgoing parliament can pass legislation up until today.