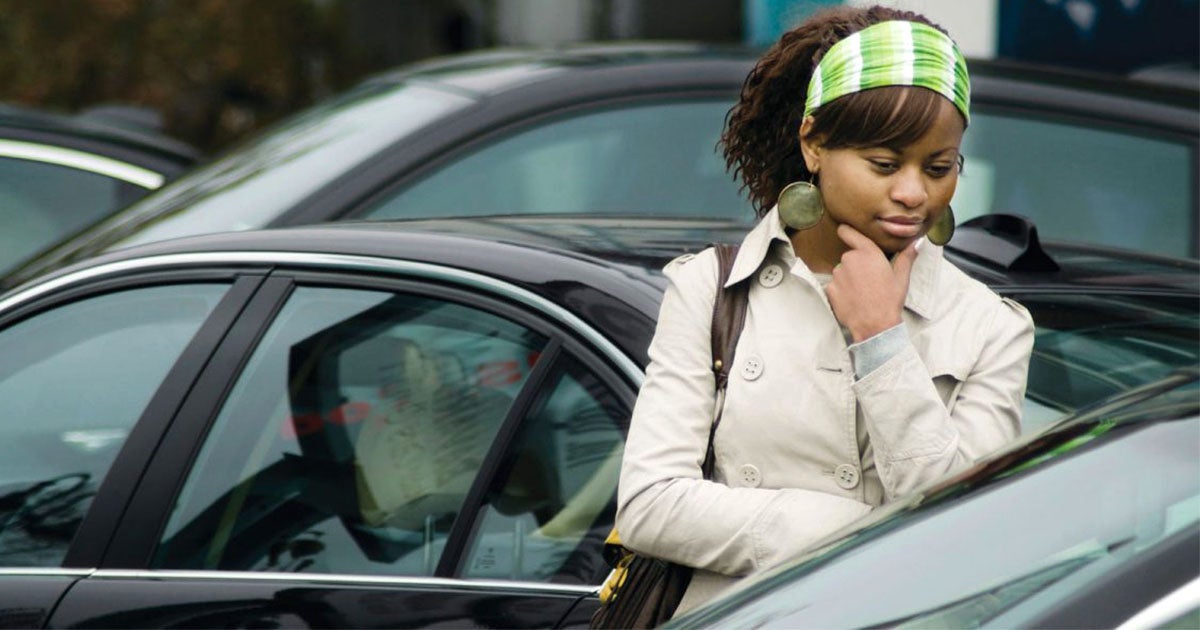 Merely typing “vehicle efficiency and emissions standards,” feels like I’m prompting you to click off in search of the latest cat meme or 8,000th story on President Trump. But the next battle in the war for better vehicles looms, and you can help defend against automaker efforts to rollback a program they agreed to not so long ago.

Here are the top three reasons why you should care about the U.S. Environmental Protection Agency (EPA) “Request for Comment on Reconsideration of the Final Determination of the Mid-Term Evaluation of Greenhouse Gas Emissions Standards for Model Year 2022–2025 Light-Duty Vehicles” (aka federal vehicle efficiency standards) and what you can do about it.

Vehicle efficiency standards save money for all Americans, but especially low- to middle-income earners

Researchers at the University of Tennessee analyzed 34 years of consumer spending data and found that not only did households from all income levels save money because of improved vehicle efficiency, but low- to middle-income households saved a greater percentage of household income compared to higher earners. Better fuel efficiency saved an average middle-income family as much as $17,000 over the study period—even after households paid more for new and used cars equipped with fuel-saving technology. Vehicle efficiency standards, the researchers concluded, are therefore a true progressive (as opposed to regressive) policy because they benefit lower earners more than higher earners.

Interested in more of these findings? Check out this UCS fact sheet.

Without fuel efficiency standards, automakers would only make gas guzzlers

Free market advocates argue that fuel efficiency standards aren’t necessary. If there is demand for fuel efficient vehicles, then automakers will create a supply to meet that demand. While that sounds good in theory, in practice it doesn’t happen.

In the absence of federal standards, fuel efficiency largely stagnated (see below) and automakers proved reluctant to offer fuel efficient options outside of small sedans. 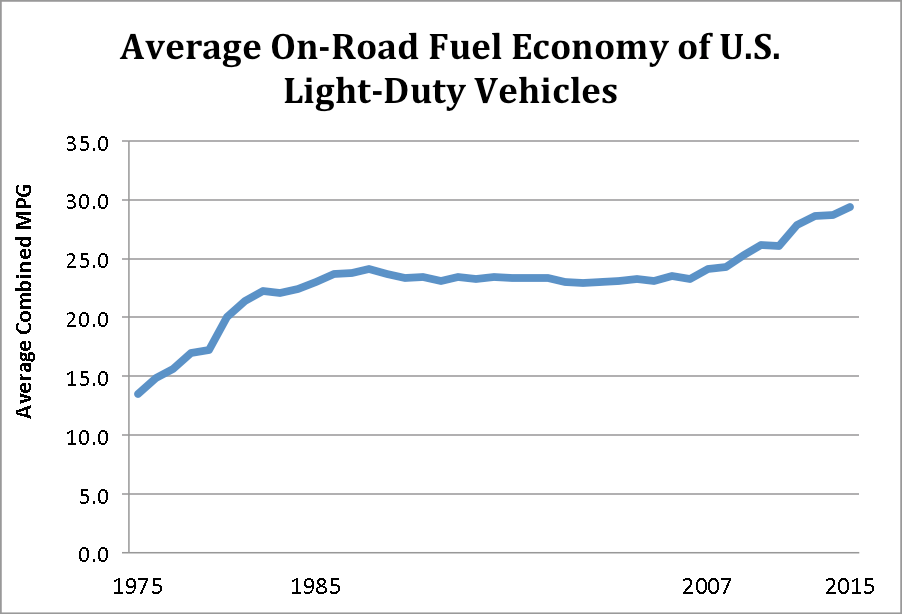 In response to the 1973 oil embargo, Congress established fuel economy standards for new passenger cars in 1975, then again in 1978. These standards were intended to roughly double the average fuel economy of the new car fleet to 27.5 mpg by 1985. No fuel efficiency standards passed until 2007 …EPA 2016 Fuel Economy Trends Report. Appendix D: Fuel Economy Data Stratified by Vehicle Type

But Americans largely don’t want small sedans. We want SUVs … and fuel efficiency! Fortunately, the vehicle efficiency standards incentivize automakers to make vehicles across all classes—including SUVs, pickup trucks, and minivans—more efficient. Because the standards do not require automakers only to make small, ultra-efficient vehicles, they prompt automakers to create innovative technologies that boost the fuel-saving performance of the larger vehicles that Americans tend to prefer.

For example, the 2017 Toyota Highlander Hybrid, a full-size SUV, gets a combined 29 miles per gallon. That’s what I average in my mid-sized 2012 Subaru Outback Sport. Not too long ago, the 2001 Highlander only got a combined 18 mpg and the 1995 4Runner (the Highlander predecessor) got 13 mpg. And, the standards are incentivizing automakers to develop electric vehicles. There are growing numbers of electric vehicle models and several auto companies are set to release full electric SUVs in the next several years.

By providing automakers with flexible ways to comply with the standards (aka compliance pathways), the federal vehicle efficiency program has been instrumental in giving consumers more fuel efficient choices no matter what sort of vehicle they need.

I’m guessing that you care, at least tangentially, about climate change. You are reading a blog from the Union of Concerned Scientists, after all. So, you should know that the standards are set to achieve the largest reduction in global warming pollution from a single federal policy (other than the Clean Power Plan, which is mired in legal trouble and threat of repeal from the current Administration).

Transportation is one of the biggest sources of global warming pollution in the U.S., having accounted for 27 percent of emissions in 2015. Cutting emissions from transportation is challenging as our nation continues to rely on personal vehicles and driving has become incentivized by relatively low gas prices and may become further incentivized by the introduction of autonomous driving features. 2016 had the largest increase in national vehicle miles travelled (VMT) since regulators began tracking this data in 1971 and doesn’t show any sign of slowing down. More cars were sold in 2016 than ever before, adding to the 263 million registered vehicles on American roads. 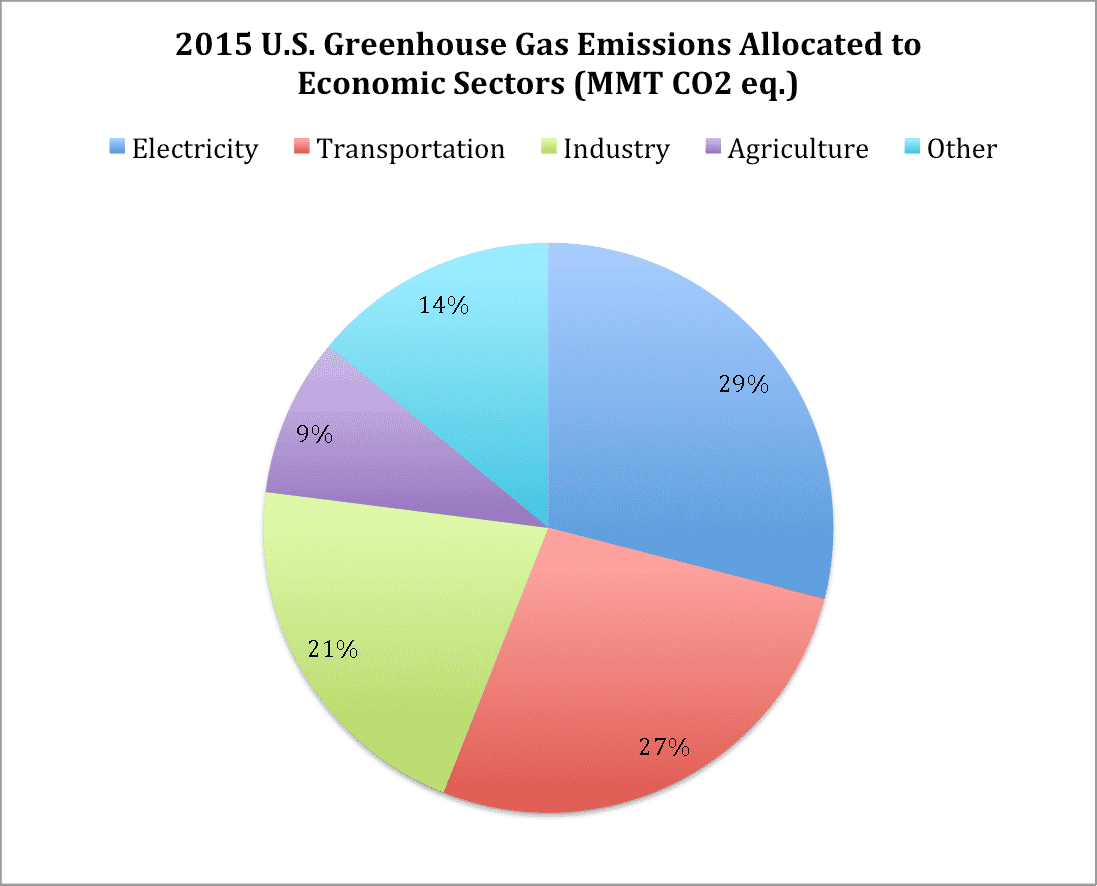 Transportation is one of the biggest sources of global warming pollution in the U.S.EPA Inventory of U.S. Greenhouse Gas Emissions and Sinks: 1990–2015. Table ES-6

That’s why—along with electric vehicles, better biofuels and better transit options—improving the fuel efficiency of vehicles is so important. When including the emissions reductions from the finalized standards for heavy-duty vehicles, the federal fuel efficiency programs will cut emissions by an estimated 550 million tons in 2030 alone. That would be a reduction of more than three percent of today’s transportation-related emissions and would achieve more reductions over time as the vehicle fleet turns over and gradually becomes more efficient.

UCS is leading the way on telling the EPA and Department of Transportation that consumers want to stick with the current standards. Not only are the standards cost-effective and feasible to meet, the agencies’ research showed that automakers could even exceed them. Help protect standards that are saving Americans money at the pump and reducing the risks of climate change.

Head on over to the UCS Action Center for a couple of easy actions you can take, including: