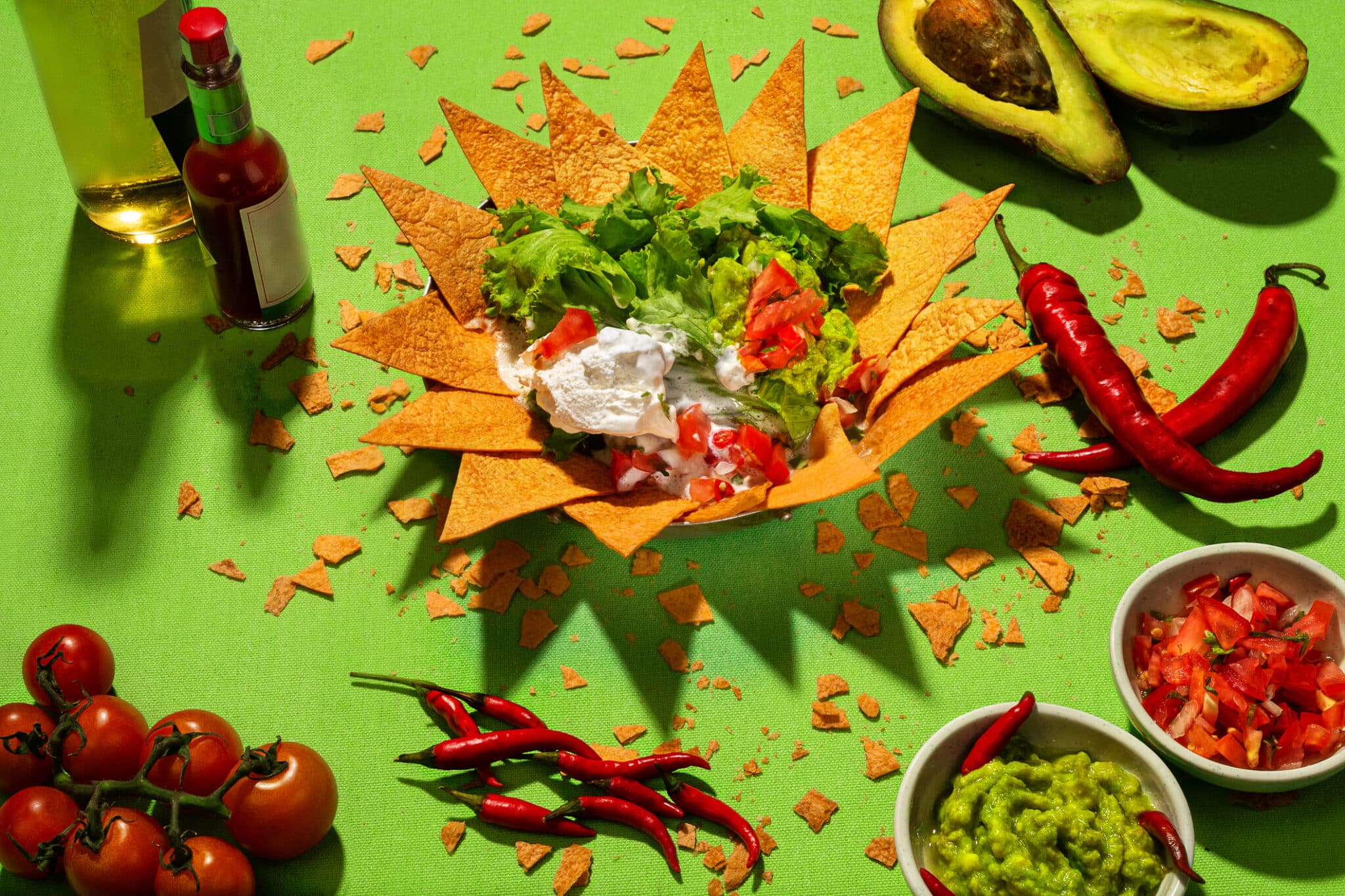 Chips and guacamole are an easy but delicious addition to the vegan game day menu. Oleg Kornilov / 500px / Getty Images

Super Bowl LVI is coming up fast on February 13, and this annual event is often centered around the snacks. But most of the time, if you’re a vegan walking into a watch party, you’ll see tables full of meat- and cheese-laden snacks. Watching the big game doesn’t have to be a carnivorous affair, though. There are plenty of plant-based snacks and finger foods that everybody, vegan or not, will enjoy.

If you’re planning a Super Bowl viewing party or have an invite to attend a friend’s consider whipping up any number of these tasty snacks to munch on while you watch the Bengals and Rams face off for the win.

Buffalo chicken dip is a game day staple, but you can make a plant-based version that skips the cream cheese, cheese, and chicken. There are many ways to make a vegan buffalo chick’n dip, too. This recipe from Nora Cooks uses artichoke hearts as the replacement for chicken, while this version from The Edgy Veg swaps meat for canned jackfruit. Yet another recipe from Karissa’s Vegan Kitchen comes together quickly thanks to store-bought chicken alternative, cream cheese, and cheese.

Regardless of how you make it, this dip will be a hit. Pair it with crackers, crunchy veggies like carrots and celery, or simply eat it off your plate by the spoonful.

Meatballs aren’t exactly a finger food, but set out some reusable toothpicks and they are a perfect snack to enjoy during the game. The secret ingredient? Grape jelly. While most grape jelly is vegan, double-check that yours doesn’t contain gelatin before adding it to your plant-based veggie balls. This recipe from Thyme and Love calls for the vegan meatballs from Trader Joe’s, plus four other simple ingredients. Best of all, this is a slow cooker recipe, so it requires minimal effort from you.

You can have “wings” without the gristle or bones. Swap in your favorite plant-based chicken from the grocery store, or roast or air-fry cauliflower for a crunchy alternative. Serve with your favorite vegan hot sauce and plenty of veg-friendly ranch or blue cheese for dipping.

Not ready to wing it (pun intended)? Follow this recipe for cauliflower hot wings from Vegan Heaven, or make chick’n wings with seiten using this recipe from Side Chef.

If you’re feeding a small crowd, customizable options are the way to go. Loaded nachos can please a number of palates based on what you add on top. Start with your favorite tortilla chips and vegan cheese sauce. Looking to make your own? Try this smoky vegan cheese sauce from Minimalist Baker.

From there, add on anything your heart desires. Jalapeños, roasted corn, tomatoes, bell pepper, avocado, black beans, and sauteed mushrooms would all be welcome additions to your spread.

Okay, so this isn’t exactly revolutionary. Many times, the veggie tray is the only somewhat vegan-approved option at a watch party, that is until someone inevitably drips the ranch dip on the communal broccoli. But why not make the veggie tray a little more exciting than an afterthought?

Pile up the classic vegetables, like carrots and broccoli, but consider some unconventional options too, like sliced radishes, cucumbers, snap peas, and even asparagus and green beans. Then go all out with the dips. Include the previously mentioned buffalo chick’n dip, lay out some vegan ranch and blue cheese options, and use some leftover cheese dip from the nachos for the veggie tray.

Battering and deep-frying jalapeños is a delicious way to eat this spicy vegetable, but oftentimes, you need eggs for the batter. Instead of fussing with making a plant-based batter and making your entire home smell like hot oil, try stuffed jalapeños instead.

To make them, cut the pepper in half vertically, removing the seeds. Stuff the inside with plant-based cream cheese, vegan shredded cheese, and your favorite spices. Top with a little bit more shredded cheese and breadcrumbs, then bake. For more direction, follow World of Vegan’s recipe.

Both customizable and easy to eat with your hands, miniature pizzas should also make your watch party menu. For sauces, try marinara, pesto, or simply olive oil and herbs. Top with vegan shredded cheese, plant-based pepperoni, or your favorite veggies. Heck, add pineapple too if it tickles your fancy. Each person can make their own mini pizzas, so feel free to add your favorite toppings, controversial or not.

Another game day staple, chips and guacamole are an easy but delicious addition to the menu. Sure, you could buy guacamole at the store, but it’ll taste much better if you make it yourself. For fresh, nutritious guacamole, you just need a handful of wholesome ingredients. My personal favorite guacamole recipe is by celebrity chef Aarón Sánchez, but feel free to experiment or try different recipes to find your go-to.

For a more filling snack, opt for sliders with bean patties or store-bought meat alternatives, like Impossible or Beyond burgers. Pile it high with veggies, or leave them plain — your choice. If you want to make your own plant-based patties, check out these brown rice and black bean burgers by The Savory Vegan or the portobello burgers with caramelized onions from My Darling Vegan.

Last but not least, swap hot dogs for veg dogs for a snack everyone will enjoy. Many store-bought plant-based dogs closely mimic the taste and texture of real hot dogs, making them a good option for friends who are interested in cutting back on their meat intake. You can also try your hand at making these flavorful carrot dogs from Brand New Vegan to really impress the crowd.