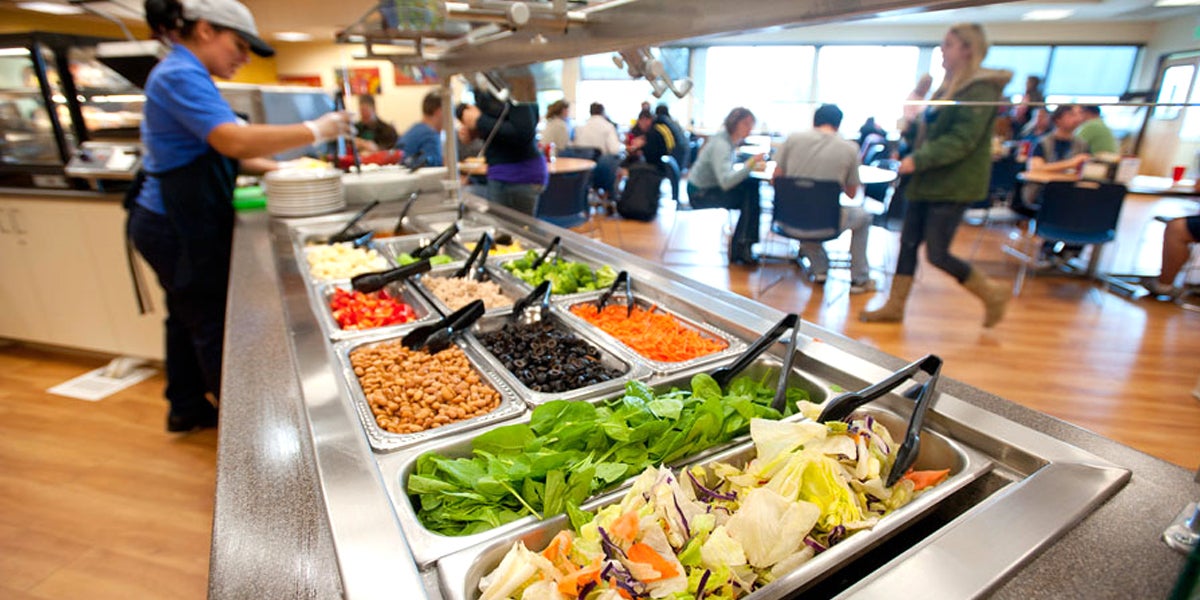 What’s served up in college cafeterias became a hot topic this summer thanks to an episode of writer Malcolm Gladwell’s podcast Revisionist History. In July, Gladwell argued that some schools are spending big bucks putting fancy food on the menu—think lobster bakes and venison—instead of offering financial aid to low-income students. But another trend in campus dining halls that Gladwell might want to take a look at in a future episode is one that could hold down college food costs: vegan meal options. Meat- and dairy-free menu items have become one of the hottest things on college cafeteria menus.Colorado Mountain College

According to a survey released Tuesday by peta2, the youth division of People for the Ethical Treatment of Animals (PETA), meat- and dairy-free menu items have become one of the hottest things on college cafeteria menus.

The organization surveyed nearly 1,500 four-year colleges and universities in the U.S. and found that 62 percent of schools serve vegan menu items on a daily basis, up from 28 percent in 2014. The survey also found that about 9 percent of schools—private institutions like American University in Washington, DC and public state schools like the University of California, San Diego—have entirely vegan dining stations.

The vegan revolution isn’t just happening on the coasts. The 36,000-student University of North Texas has had a 300-seat all-vegan dining facility since 2011. After the school installed the vegan dining hall, “meal-plan sales rose by 20 percent while operating costs remained comparable,” according to peta2.

Animal products “are among the most expensive items when it comes to wholesale food costs because of the massive amount of water and grains required in order to produce them,” Ben Williamson, senior international media director for PETA, wrote in an email to TakePart.

A study published in the September 2015 edition of the Journal of Hunger & Environmental Nutrition found that people who go vegetarian spend an average of $750 less on groceries than folks who follow federal dietary recommendations. Colleges that replace meat and dairy menu items with plant-based offerings are likely seeing similar per-student savings.

A desire to save money isn’t the only reason schools are moving to meat-free meals.

Many “students have made it clear they understand the health benefits of vegan food, along with its lower impact on the environment,” Brian McCarthy, a chef at the Massachusetts Institute of Technology, said.

College student drops out after school denies request to opt out of 'unhealthy' meal plan via @EcoWatch https://t.co/8XWxl3D6P4

“Vegan food has now reached the mainstream in even the most rural parts of the country, which is a testament to the rapid decline of the meat, dairy and egg industries,” Williamson wrote. “Students at the University of Montana, for example, can always get a hearty meal at the vegan dining station on campus, and Oklahoma City University offers a dining station that’s both vegan and raw, despite being in the heart of the ‘beef belt.’ “

Per-capita meat consumption in the U.S. jumped 5 percent in 2015, the biggest increase since the 1970s, but Williamson believes college students will stick with a vegan lifestyle after graduation—a shift made easier by food companies and restaurants.

“While college campuses are often the incubators of emerging trends, the progress doesn’t end there: After students graduate, they’ll be entering a world where major brands such as Chipotle, Ben & Jerry’s and even White Castle now advertise vegan options front and center,” he wrote.

As for those schools that still believe a vegan option is a sad-looking salad bar, peta2 has a “Veganize Your Dining Hall” campaign pack, which gives students resources for lobbying their schools to adopt more robust vegan-friendly menus.