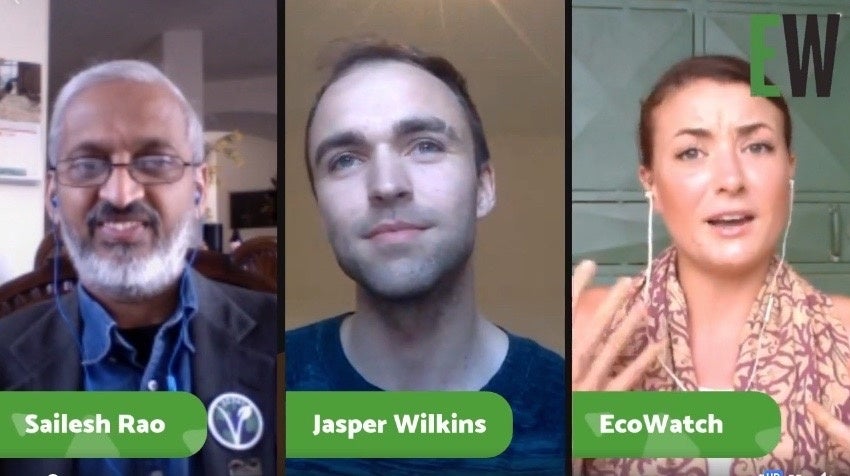 We are thrilled to announce our third challenge of the year in hopes of inspiring you to take part in a sustainable solution. It’s simple: go vegan for 10 days, talk about it in your daily life and create social media posts about your experience using the hashtag #Vegan4TenDays. For a chance to be featured on EcoWatch’s Instagram, tag EcoWatch in your stories.

Going vegan is proven to be the best thing you can do for the planet so EcoWatch teamed up with the executive producer of What the Health? Sailesh Rao and VBites head of marketing Jasper Wilkins via Facebook Live to break down the vegan lifestyle for you in a digestible manner.

“[Going vegan] is the absolute best thing you can do from a climate change perspective and an extinction perspective,” said Rao.

Rao explained that one third of croplands are used to graze animals. “We are extracting six times as much food as we need from the planet and we are giving 83 percent of the food we extract to the animals and then starving 9 million people to death every year.”

Rao explained that we have a systematic problem driven by scarcity in a hierarchal system we have created.

EcoWatch asked Rao how we’ve ended up in such a system that teaches, for example, that products like dairy are healthy for humans to consume.

“The FDA is part of the U.S. government. The U.S. government is pretty much influenced by industry. So the industry has convinced the FDA that we need to sell more,” said Rao. “This is how they have basically convinced schools to give milk to kids, to have cheese in their lunches even though it is well-known that this is not good for them. So they get type 1 diabetes, and all kinds of diseases by eating excessive dairy. Unfortunately this is the system that we live in. We create diseases in people and then we fix them with pharmaceuticals and surgical procedures.”

When Rao was diagnosed with arthritis at age of 40 he was taking painkillers daily, until he switched to a vegan diet. Within one month of eating vegan, he no longer suffered from the pain.

EcoWatchers engaged with the live feed by attesting to Rao’s statement, such as Michael Chapman who said, “My spouse (primary and urgent care MD) is reversing his patients’ diabetes and heart disease by switching them to Whole Foods (organic) plant-based diet.” Another comment was from nurse practitioner Rosario M. Chayo, who said, “I encourage as Vegan as possible [when formulating diets]!”

The Facebook Live has almost 200 comments suggesting that people care about their impact on the planet and are willing to engage in solutions such as going vegan.

“It’s so important for our own health, but obviously the health of the planet and the health of the other people and animals that we share this world with,” said Wilkins as he brought up the unsustainable practice of overfishing.

Over the past five years Wilkins traveled the world working on humanitarian projects that were directly affected by climate change. By leading a vegan lifestyle and using social media to spread positive awareness with projects such as In Focus and International Citizen Service, Wilkins is able to do his part to mitigate the climate crisis. Wilkins stands by veganism on the basis of animal rights, human health and the health of our planet.

Wilkins has seen first-hand positive effects of the vegan trend. While working for the vegan food company VBites, he’s seen the growth in demand for the more than 130 products offered. “More and more people now are more open to changing to a plant-based diet because now the technology is there to replicate taste. It’s really good that everything is coming together at one time.”

“It has an immediate impact on the environment by going vegan and it’s something that is becoming so much easier because of the accessibility of food,” he said.

If everyone were to switch to a vegan diet, one third of our land could return to its original use, a lush wildlife habitat.

“From a climate change perspective, this is the number one thing anyone could be doing,” said Rao as he expressed hope.

Are you up for the challenge? It’s simple.