Help Save the World’s Most Endangered Species 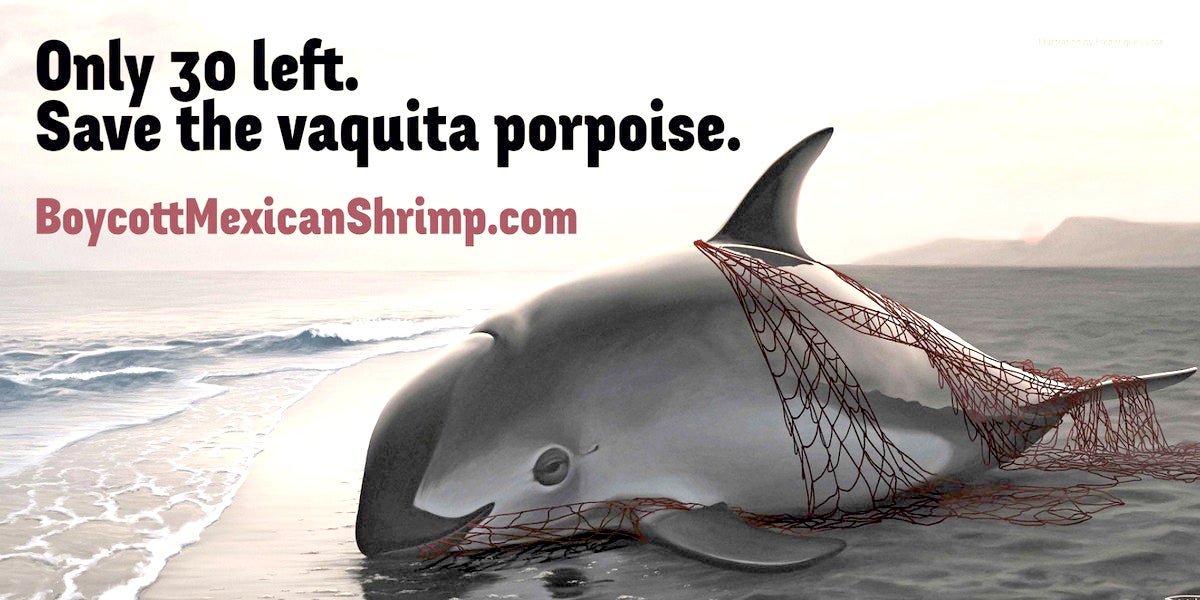 There are only about 30 vaquita porpoises left in the world. The smallest and most endangered cetacean species on the planet faces extinction in three years if the people with the power to save it don’t take immediate action. Instead of shrugging their shoulders and casting blame elsewhere, the Mexican government, Mexican shrimp fisheries and U.S. shrimp importers must be bold or Mexico will lose this national treasure. But they’re not committed to taking the steps necessary to save the vaquita, so we have to motivate them. Boycotting Mexican shrimp is the answer.

The vaquita’s steep decline is solely attributable to the use of gillnets in their habitat, a 2,000km² area in the northwest corner of the Upper Gulf of California—an area roughly equal in size to Orange County, California. Vaquita get tangled and drown in gillnets used to catch shrimp, totoaba and other fish. Between 1990 and 2010, shrimp fisheries’ use of gillnets drove the population down by more than 70 percent from more than 700 to about 200. After 2010, the use of gillnets in an illegal fishery for a croaker fish called the totoaba (also endangered and also found in the Upper Gulf of California) increased the vaquita’s rate of decline as fishermen flooded the area with gillnets to supply Asian demand for totoaba swim bladders.

The response from those with power to force change has fallen flat. The Mexican government promised stronger enforcement of a temporary and incomplete gillnet ban and a ban on fishing in a special vaquita refuge. It hasn’t happened; fishermen’s use of gillnets in the vaquita’s habitat continues unabated. Mexican shrimp fisheries point fingers at the illegal totoaba trade, refusing to take responsibility for bringing the vaquita to the cliff’s edge and focusing instead on the fishery that is giving the vaquita the final fatal push. And U.S. shrimp importers pledge fealty to “sustainability,” but continue to profit without demanding the vaquita’s recovery.

Zak Smith is a senior attorney at the Natural Resources Defense Council.